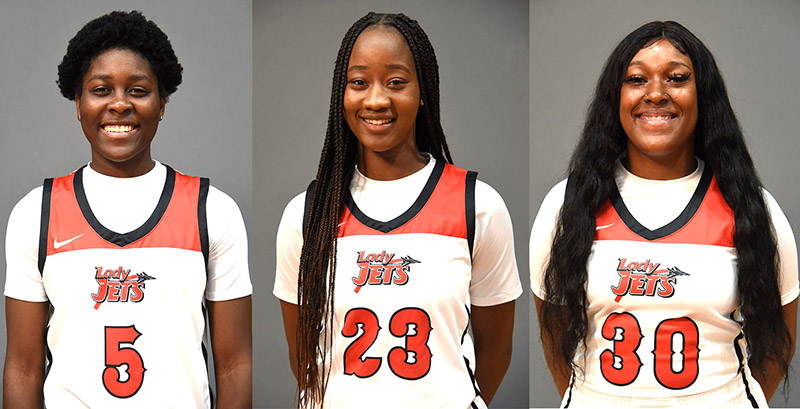 Alexia Dizeko was selected as the Freshman of the Year for the Conference. She and freshman center Fanta Gassama were also nominated for the GCAA First Team. Redshirt sophomore Kamya Hollingshed earned Second Team All-Region honors.  The Lady Jets are currently ranked 9th in the National Junior College Athletic Association (NJCAA) standings despite finishing second in the GCAA this season with a 12 – 3 record.  They are 25 – 5 overall.  They average 72.7 points per game.

“I am very proud of each one of these players and the other members of our team,” said SGTC Athletic Director and Lady Jets head coach James Frey.  “We were excited to finish the regular season 25 – 5, playing nine freshman and two sophomores.  I have seen considerable improvement since October and hopefully we’re ready to take the next step and win another championship.  The good news is since Dizeko and Gassama are freshman, we will have them again next season.”

Brandon Harrell, head coach of the Georgia Highlands Lady Chargers and former Lady Jets head coach, was selected as the GCAA Coach of Year after guiding his team to a 15 – 0 conference record and winning the GCAA regular season conference title.  They beat the Lady Jets all three times in head to head competition this season.  Georgia Highlands Jashanti Simmons earned the GCAA Player of the Year honors and her teammate Jada Alston was selected as the Defensive Player of the Year.

South Georgia Tech’s Alexia Dizeko, 6’ 0” shooting forward from Sion, Switzerland, was named GCAA Freshman of the Year and a First Team All-Region player based on her individual performance on the court during the 2021 – 2022 season.  She played in 28 games this season and started 27 of those.  She averaged over 20 minutes of play each game.  The freshman is the leading scorer for the Lady Jets averaging 14.4 points.  She hits over 55% of her shots from the field and is a 79.5% free throw shooter.  Dizeko averages 8.3 rebounds each outing along with 2.3 assists and 1.5 steals.

Another SGTC freshman Fanta Gassama, 6’ 1” center from Mataro Spain, was also a first team All-Region selection.  She averages 10 points per game and started 19 of 28 games for the Lady Jets.  She hits 55.9% of her shots from the field and 66.2% of her free-throws.  She leads her team in rebounds averaging 12 per game.  She also has 1.8 assists, 1.4 steals and an average of 1.1 blocks each outing.

The other Lady Jet to receive All-Region honors is redshirt sophomore Kamya Hollinshed, a 5’ 7” shooting guard from Locus Grove, GA.  She is the second leading point producer for the Lady Jets averaging 12.8 points.  She hits 37% of her shots from the field including 36.2 from the three-point line.  She is also a 67.4 percent free throw shooter who contributes 3.5 rebounds, 1.7 assists and 1.4 steals each game.