Defense makes the difference in Panthers’ first round win over Hephzibah 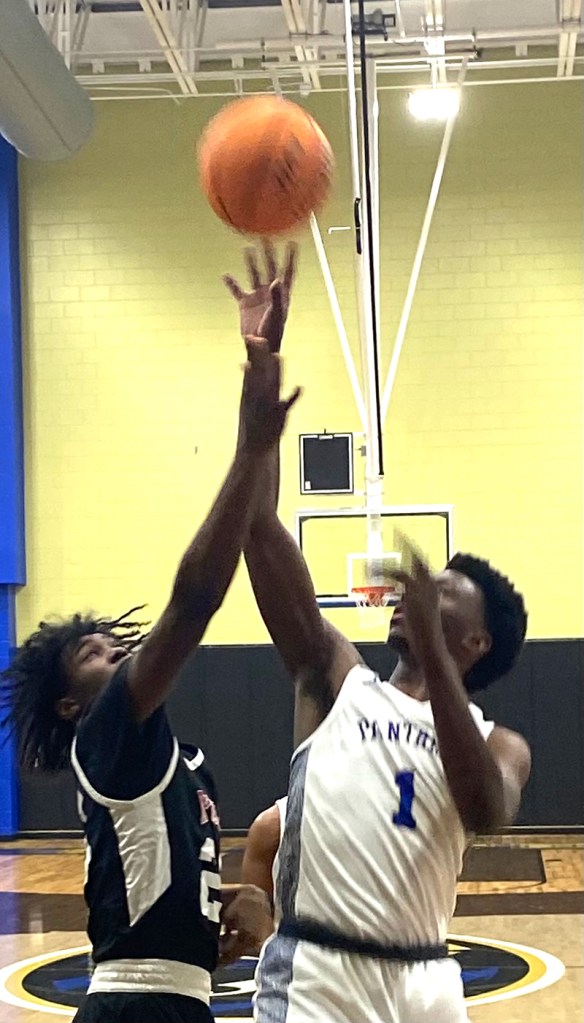 AMERICUS – It has been said by some that defense wins championships, and while a team needs to also score points on offense to win in any team sport, this cliché has been proven to be true in the past and may end up proving to be true in the case of the Sumter County Varsity Boys’ Basketball Team (SCHS) should the Panthers make the march all the way to Macon and claim the GHSA Class AAA state title. On Wednesday evening at Sumter County High School, the Panthers took the first step to doing just that and they did it with defense in their 76-54 victory over Hephzibah

(HHS) in the first round of the GHSA Class AAA boys’ state basketball tournament.

“My guys stepped up. They played together,” SCHS Head Coach Johnny Genwright said. “I told them that we want to go off our defense. Everything needs to go off our defense. I knew this team (HHS) was going to make a run. They were athletic, but we kept fighting. We didn’t stop and everybody played team defense. We made some tough shots, but our defense got us going. I just told them at the end of the day to come out with energy and enthusiasm.” 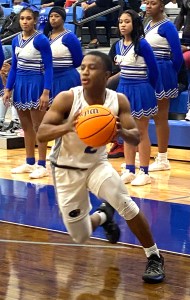 Sumter County junior shooting guard D.J. Hurley scored 22 points in the Panthers’ 76-54 victory over Hephzibah in the first round of the state tournament and 12 of Hurley’s points came from four made three-pointers.
Photo by Ken Gustafson

While the Panthers’ strong defensive play was the main factor in the outcome, they also got it done on the offensive end as well. Both Kyric Davis and D.J. Hurley each scored 22 points to lead SCHS in scoring and 12 of Hurley’s points came from four three-pointers in the contest. Both Elijah Westbrook and Brandon Pope each had six points and Cameron Evans had five in the winning cause. 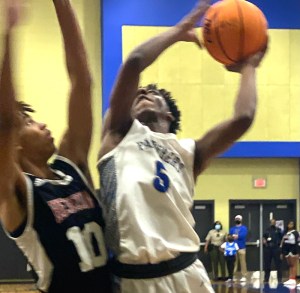 However, in the early minutes of the fourth quarter, SCHS turned it up another notch when Cameron Evans found Davis on an ally-oop dunk. Davis then came through on the defensive end shortly thereafter with a shot block at the other end. 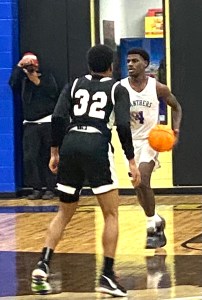 These two plays by Davis seemed to send a message to the Rebels, the crowd and the rest of the SCHS squad that the Panthers would be in total control the rest of the way and they were.

The Rebels tried to get back in the game by pressing SCHS full court, but to no avail, as the Panthers were able to handle the press with ease. As much as they tried to, HHS struggled to score against the Panthers’ defense and could not make a serious run to get back in the game. While HHS was struggling offensively, SCHS continued to be aggressive the rest of the way and went on to win convincingly by the score of 76-54.

With the win, the Panthers improve to 26-2 on the season, while HHS finishes its season at 9-15. The Rebels were led in scoring by Cornelius Smith, who had 18 points.

The Panthers will now advance to the second round of the GHSA Class AAA State Tournament and will host the winner between Franklin County and Lakeview-Fort Oglethorpe most likely on Saturday, February 26. A definitive date and time of tip off is still to be determined.