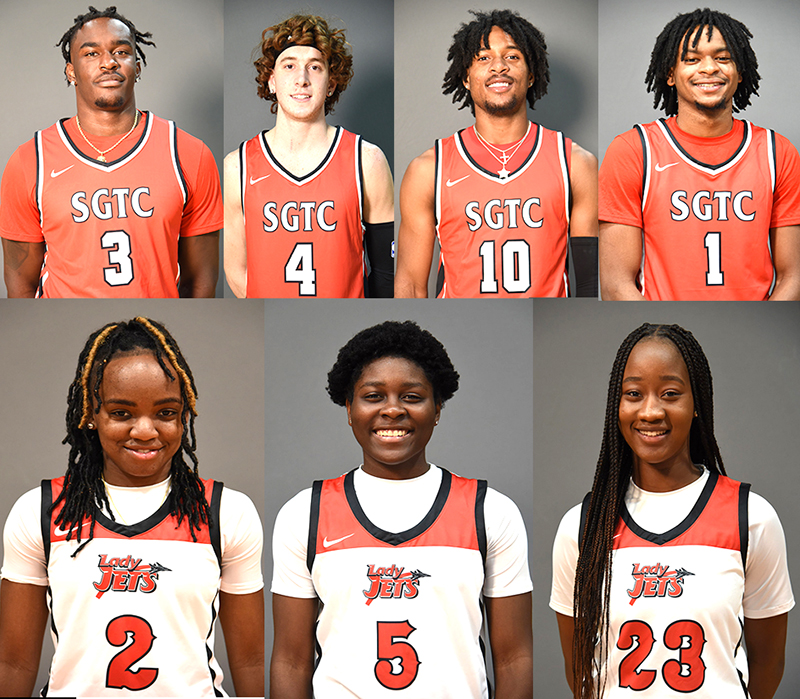 Shown above are the SGTC Jets and Lady Jets who earned individual recognition this week in the NJCAA rankings. Shown (l to r) on the top row are Jalen Reynolds (3), Will Johnston (4), Marvin McGhee, III, (10), and Malik Battle (1). Maikya Simmons (2), Alexia Dizeko (5), and Fanta Gassama (23) are shown on the bottom row (l to r). Photo by SGTC Athletics

AMERICUS – The South Georgia Technical College Lady Jets climbed up one spot into 8th place in the National Junior College Athletic Association (NJCAA) Division I women’s intercollegiate basketball polls this week and the Jets received votes again to be included in the NJCAA Division I men’s basketball top 25 poll.  SGTC is one of only 10 colleges in the NJCAA to have both the men’s and women’s teams receiving votes or ranked in the top 25 in the nation.

The Lady Jets were ranked 9th last week but a win in their last regular season game allowed them to move into 8th place this week prior to the NJCAA Region XVII tournament. The Lady Jets had climbed as high as the fifth-place spot nationally after opening the season unbeaten.  Since then they have dropped to as low as 21st before they started climbing back to 14th, 13th, 12th, 11th, 9th and now 8th place.

The Lady Jets are currently in second place in the Georgia Collegiate Athletic Associate conference with an 12 – 3 record behind the top-ranked 15 – 0 Georgia Highlands Lady Chargers.  The Lady Jets will face Andrew College in the semi-final round of the NJCAA Region XVII end of the season tournament in Rome on Friday, February 25th at 8 p.m.  Top-ranked Georgia Highlands will match-up against East Georgia State College in the other semi-final game at 6 p.m. on Friday, February 25th.  The winners of those games will meet in the finals on Saturday, Feb. 26th at 2 p.m. in Rome.

Northwest Florida State College, New Mexico Junior College are in sixth and seventh place above the  South Georgia Technical College Lady Jets. The College of Southern Idaho and Mobley Area Community College round out the top 10.

Georgia Highlands and South Georgia Tech’s Jets are the only two Georgia two-year colleges to receive votes in the NJCAA Men’s Division I polls this week.  South Georgia Tech had climbed as high as 21st in the polls earlier this season.

In addition to the overall team rankings, three Lady Jets and four Jets were highlighted for their individual efforts.  Freshmen Alexia Dizeko and Fanta Gassama along with sophomore Maikya Simmons were the three Lady Jets spotlighted.  Jets Sophomores Jalen Reynolds, Will Johnston, Marvin McGhee, III, and Malik Battle were the four Jets singled out for their individual efforts on the court.

Freshman center Fanta Gassama led the Lady Jets in individual stats this week.  She was featured in five different categories.  She is currently the fourth leading rebounder in the nation with 337 over 28 games. Her teammate Alexia Dizeko, another freshman was ranked 34th in total rebounds with 233 in 28 games.  These two Lady Jets were also highlighted for their field goal percentage shooting.   Gassama is ranked 30th hitting 55.9 percent of her attempted shots while Alexia Dizeko is ranked 35th with a 55.3 percent success rate from the field.

Alexia Dizeko, the freshman shooting forward from Switzerland, is currently the 37th best scorer in the nation with a total of 402 points in 28 games.  Dizeko is also ranked as 39th in free throw percentage shooting.  She is hitting 79.5 percent of her attempts.

Their teammate, Maikya Simmons, the sophomore point guard from Stafford, VA, is ranked 14th in assists per game with an average of 5 to close out the individual accomplishments for the Lady Jets listed in the national rankings.

Jets sophomore forward Jalen Reynolds from Darien, Georgia, earned individual rankings in five categories the NJCAA weekly stats.  He is currently ranked 4th in the nation in total rebounds with 317 in 28 games.  He is also fourth in rebounds per game with an average of 11.3.  He earned the 5th place spot in defensive rebounds per game averaging 8.2 each outing. He is also listed as 39th in field goal percentage shooting hitting 61.2 percent of his shots and 47th in blocks per game with 1.7.

Sophomores Will Johnston, a point guard from Australia, and Marvin McGhee, III, a guard from Atlanta, Georgia both garnered attention on the court for their scoring ability.  McGhee is 19th in the nation in total points scored with 524 this season and Johnson is 42nd with 473.   He also moved into 26th place in the nation for points per game with a 20.2 average.

Will Johnson is the 21st best free throw shooter in the league hitting 85.3 percent of his foul shots.  He is also 21st in the nation in assists per game with 5.8.

Malik Battle and Marvin McGhee were both listed as leaders in the nation in three-point percentage shooting.   Battle led the team with a 49.6 percent success rate from the three-point line, which is 4th best in the nation.  McGhee is ranked 27th hitting 47.6 percent of his shots.

The Jets will host Andrew College tonight at 7 p.m.   There is the last regular season home game for the Jets.  They will travel to East Georgia State College on Saturday, February 26th for a 3 p.m. game to close out the regular season.  The Jets are currently in second place in the conference behind Georgia Highlands.  They trail by one game.  They will have the opportunity to host at least one game in the NJCAA Region XVII end of the season tournament on Tuesday, March 1st and may have the opportunity to host the semi-final and final round of the tournament on March 4th and 5th depending of it they can move into first place by the end of the regular season.

The Lady Jets will travel to Rome for the NJCAA Region XVII semi-finals on Friday, February 25th for an 8 p.m. game against Andrew College.  East Georgia State College and Georgia Highlands open the semi-final round at 6 p.m. Friday in Rome.  The two winners will advance to the finals on Saturday, Feb. 26th at 2 p.m.