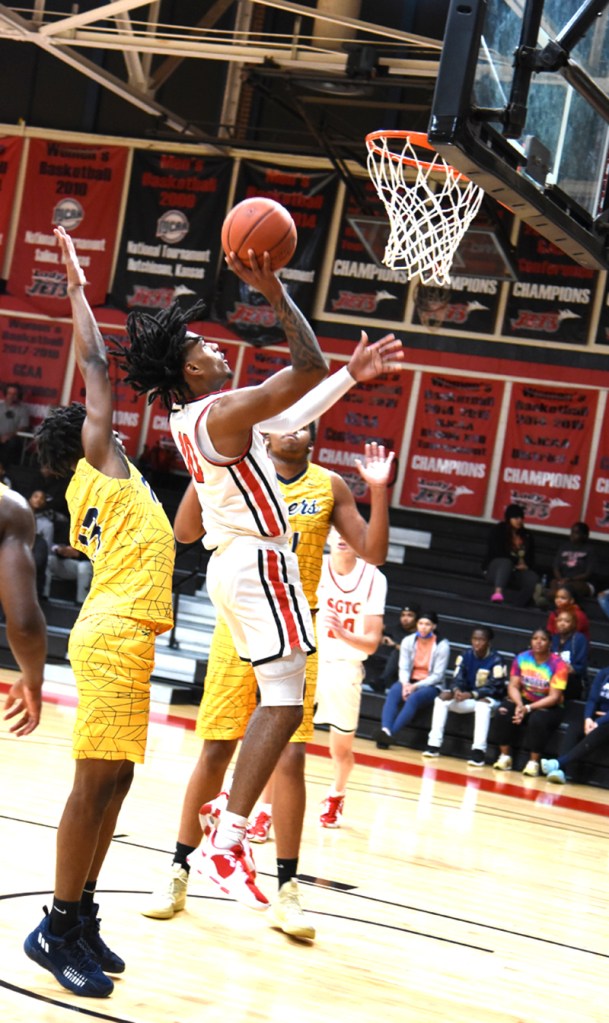 AMERICUS – The South Georgia Technical College Jets captured their sixth consecutive win with an 88 – 59 victory over Andrew College in their last regular season home game Wednesday, February 23 at the Hangar.  The Jets are in second place in the Georgia Collegiate Athletic Association (GCAA), one game behind top-ranked Georgia Highlands with an 11 – 4 GCAA record and 19 – 10 overall.  Georgia Highlands is 12 – 3 and 19 – 10.

“We are really playing good right now,” said SGTC Jets head coach Chris Ballauer.  “We have three really good guards who are playing at a high clip right now.  Also getting Matija back from a broken hand has helped.  And having a player like Jalen Reynolds is every coach’s dream.  Defending and rebounding is what everyone sees but when we need a basket the guys call his number.”

Coach Ballauer also said he is excited and pleased to be hosting a first-round NJCAA Region XVII game on Tuesday, March 1st at 6 p.m.  “We don’t know who we will be playing yet, and I am holding out hope to host the final four.  But we have to handle our part by winning games to have those things happen.”

To even make the regular season championship possible, the Jets will have to secure a win over East Georgia State College and former SGTC head coach Travis Garrett in their final game of the regular season Saturday in Swainsboro.  The Jets won 95 – 71 in Americus earlier this season.

“East Georgia has been playing great basketball and had a seven-game winning streak before they lost to South Georgia State College in Waycross last night 79 – 57.  We know they will be tough,” said Ballauer.  Georgia Highlands final game will be Saturday in Albany against Albany Tech.  Georgia Highlands beat Albany Tech earlier in Rome, 76 – 71.

Right now, the top four spots in the GCAA conference are all separated by one game.  Georgia Highlands is in first place with a 12 – 3 record, South Georgia Tech is second at 11 – 4, South Georgia State College is third, 10 – 5 and East Georgia State is fourth with a 9 – 6 record.  Albany Tech is fifth at 8 – 7, Central Georgia Tech is in sixth (8 – 8), Southern Crescent is seventh at 5 – 10 and Andrew College and Gordon are tied for eighth with identical 2 – 12 records.  The regular season ends Saturday.

The win over Andrew College Wednesday made it possible for the Jets to remain in the hunt for the regular season title.  In the first half, the Jets pulled ahead by as many as 16 points before Andrew cut the lead to 41 – 27 at the end of the first half.  The Jets came back and outscored the Tigers 47 – 32 in the second half to clinch the 88 – 59 victory.

Sophomore Marvin McGhee, III, led the Jets in scoring with 23 points.  He hit three of six three-pointers, eight of 14 from the field and four of five free throws.  He also had two rebounds, three assists and three steals on the night.  Sophomore Malik Battle was close behind with 21 points.  He was three of four from the three-point line and 10 of 12 from the foul line.  He also made a layup.

Sophomore guard Will Johnson and freshman Nathan Wilson both came away with 12 points each and then Justice Hayes scored 10 points to close out the double-digit scoring.  Bryce Turner and Matija Milivojevic both added four points and Jalen Reynolds closed out the scoring with two points and nine rebounds.

The Jets will travel to Swainsboro on Saturday, February 26th for a 3 p.m. game with East Georgia.  As one of the top four teams in the GCAA, they will host an NJCAA Region XVII quarterfinal tournament game on Tuesday, March 1st at 6 p.m. in the Hangar.  The winner will advance to the semi-finals and finals on Friday, March 4th and Saturday, March 5th.