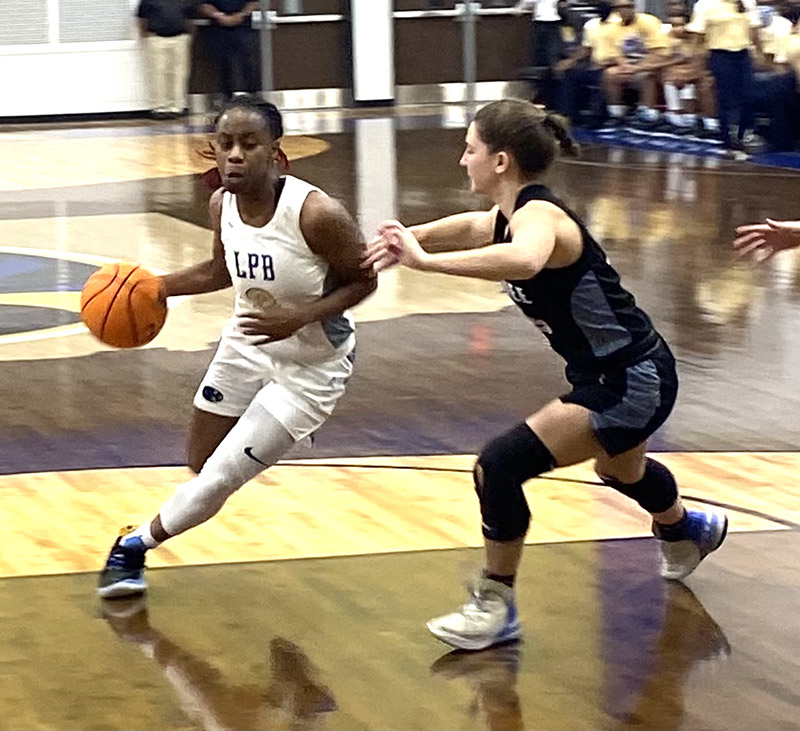 Sumter County senior point guard Tiffani Goodman (3) tries to blow by her defender. Goodman led the Lady Panthers in scoring with 18 points in their second round win over Oconee County. Photo by Ken Gustafson

AMERICUS – It wasn’t the greatest offensive display, but as they have done all season and in seasons past, the Sumter County Lady Panthers (SCHS) used their defense to neutralize their opponent. This time, the victim was the Oconee County Lady Warriors (OCH), who came into this second round game having defeated Sonoraville 44-28 in their first round game. After leading 19-13 at the end of the first quarter, the Lady Panthers held OCH to just five points in the second quarter and only two in the third quarter. Though the Warriors tried to make a run later in the game and were able to cut their deficit to eight at one point, the Lady Panthers were able to shut the door the rest of the way and went on a 9-0 run to close out the game with a 47-30 victory in the second round of the Georgia High School Association (GHSA) Class AAA girls’ state basketball tournament on Saturday, February 26 at the Panther Pit on the new Sumter County High School campus.

With the win, the Lady Panthers improve to 23-6, but more importantly, they advance to the Elite Eight of the state tournament and will host Westminster, the #1 seed out of Region 5-AAA, on Wednesday, March 2 at 5 p.m. The Lady Wildcats defeated Liberty County in their second round game.

“It was just like any other game. I thought we did a really good job,” Harris said. “We made an emphasis to come out in the third quarter and try to win the quarter. I think in the last game, we held the opponent to no points and then this one was two. Those are the things that we have to do. If we can keep them from scoring and then we were able to go on a run right there in the end. We put the ball in the right people’s hands right there at the end of the game and that was the difference.” 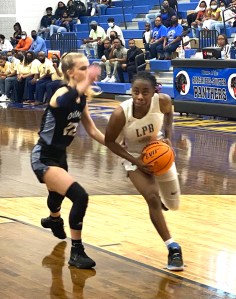 With a little less than five minutes left before halftime, SCHS had a 22-15 lead before Anna Niemeier drained a three-pointer to bring the Warriors to within four.

During the closing minutes of the first half, both teams struggled offensively. The Lady Panthers continued to use their defense to force turnovers, but couldn’t capitalize on the offensive end. However, with five seconds left before halftime and the Lady Panthers leading 23-18, Cornecia Luster drilled a three-pointer from the top of the key to give SCHS a 26-18 halftime advantage.

Both Jackson and Clemons led the Lady Panthers in first half scoring with nine points.

Over the first two minutes of the third quarter, the Lady Warriors kept moving the ball around the perimeter looking for the high-percentage shot, but thanks to the Lady Panthers’ strong half court defense, OCH turned the ball over. However, with the exception of a basket from Clemons early in the second half, SCHS was also struggling on offense over the first three and a half minutes against the solid half court defense of OCH. Neither team could score a basket until Jackson was fouled while shooting and made one of two foul shots. Though the SCHS offense was struggling, the Lady Panthers were able to hold the Warriors scoreless in the third quarter until OCH guard Kylie Wilson scored with a little over two minutes left in the quarter to cut the SCHS lead to 29-20. 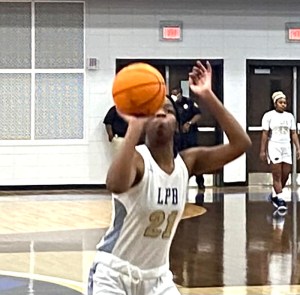 Late in the third quarter, the Lady Panthers started to press full court and they were able to force a turnover, but couldn’t capitalize on the offensive end until Clemons scored with less than a minute remaining in the quarter. However, the SCHS defense continued to be strong and held OCH to just two points in the entire third quarter. At the end of three, the Lady Panthers were eight minutes away from a trip to the Elite Eight (state quarterfinals) of the state tournament, as they led 33-20.

Neither team could score a basket in the fourth quarter until Macey Matthews knocked down a three pointer for OCH around the six-minute mark. The Warriors would get another basket around the 4:34 mark, cutting the Lady Panthers’ lead to eight, but OCH continued to struggle from the field, partly due to the stout defense of the Lady Panthers and partly due to cold outside shooting.

SCHS finally ended its scoring drought when Goodman scored and the Lady Panthers would later increase their lead to 38-25 on a three-pointer by Clemons. This prompted OCH to call a timeout with 2:48 to go in the game. 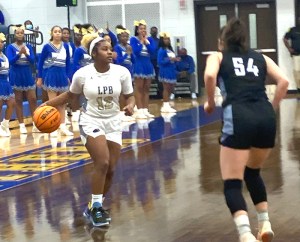 However, OCH got this far for a reason and they were not going away. The Warriors went on a 5-0 run that was capped off with a three pointer by Ava Hinzman, but that would be as close as OCH would get. The Lady Panthers responded with a 9-0 run to close out the game. Near the end of the contest, Goodman showed her dribbling ability and agility by juking out her defender not once, but twice, electrifying the crowd in the Panther Pit. On the second occasion, she used her crossover dribble to leave her defender in the dust, then drove to the basket and scored to put the icing on the cake in this 47-30 victory for SCHS and cementing their spot in the state quarterfinals.

Macey Matthews led OCH in scoring with 12 points and Caroline Davis scored six in the losing cause. The Warriors finish their season with a record of 20-8.

The Lady Panthers will host the Lady Wildcats of Westminster on Wednesday, March 2 at 5 p.m. That game will be followed by the SCHS boys’ state quarterfinal game against Windsor Forest at 6:30 p.m. The Panthers punched their ticket to the Elite Eight stage of the GHSA Class AAA boys’ state tournament with a 52-41 victory over the Warriors of Lakeview-Fort Oglethorpe.