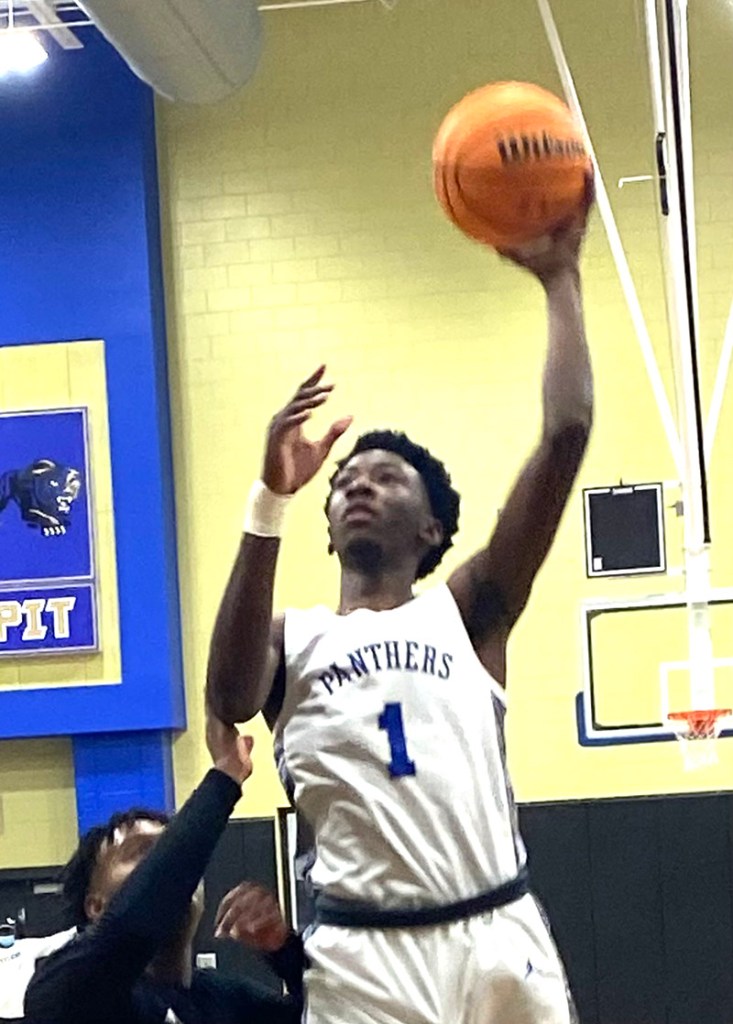 AMERICUS – The Sumter County Panthers (SCHS) are now three wins away from a state championship. Thanks to a 9-0 run by SCHS late in the fourth quarter, the Panthers were able to secure a 52-41 victory over the Lakeview-Fort Oglethorpe Warriors (LFO) in the second round of the Georgia High School Association (GHSA) Class AAA State Tournament on Saturday, February 26 at Sumter County High School.

By virtue of this victory, the Panthers (27-2) will advance to the Elite Eight (state quarterfinals) of the tournament and will host Windsor Forest on Wednesday, March 2 at 7:30 p.m. LFO, a school located in Fort Oglethorpe, GA near Chattanooga, TN, finishes its season with a record of 23-4. 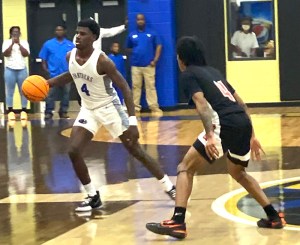 Sumter County junior point guard Cameron Evans (4) led the Panthers with 16 points in their 52-41 victory over Lakeview-Fort Oglethorpe in the second round of the GHSA Class AAA State Tournament.
Photo by Ken Gustafson

During the first few minutes of the third quarter, both teams traded baskets and the Panthers had a 34-25 lead. However, the Warriors responded with a 10-2 run that was spearheaded by Keenan Walker, who drained two three-pointers to bring LFO to within one at 36-35 by the end of the third quarter. This electrified the small but loud contingent of LFO fans, who made the 259-mile trip from Northwest Georgia.

During the first two minutes of the fourth quarter, the Panthers continued to struggle offensively and the Warriors would take a 38-36 lead. However, SCHS was patient on offense and ran several minutes off the clock before D.J. Hurley drained a three–pointer to give the Panthers a one-point lead. 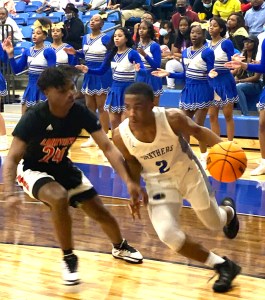 Then as the clock went below the 3:00 mark, Evans was able to score on the inside and the Panthers led 41-38 before timeout was called with 2:38 to go in the game.

With no shot clock in Georgia High School Basketball, SCHS decided to keep the ball and run more clock. The Panthers held the ball and tried to play keep away from the Warriors until SCHS Head Coach Johnny Genwright called a timeout with 1:25 to go. Out of the timeout, the Panthers were able to find Hurley down low for a layup, giving SCHS a 43-38 lead. This would be the beginning of the end of the Warriors’ season and the beginning of the celebration of another playoff victory for the Panthers. During the final minute of the game, SCHS was able to force turnovers and went on a 9-0 run before LFO’s Brent Bowman drilled a three-pointer with 25 seconds left. 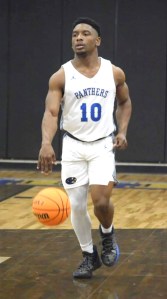 Sumter County sophomore guard Anthony Tyson (10) made one free throw in the Panthers’ win over the Warriors.
Submitted Photo

However, there would be no collapse by the Panthers and no comeback by the Warriors on this night, as Kyric Davis would sink two foul shots with 2.3 seconds left to put the finishing touches on a 52-41 victory for SCHS.

“I told my guys that we lost focus for a split second there,” Genwright said. “In the fourth quarter, we weren’t making baskets. We went on a long run without a basket. I told them to stay focused and lock in and we ran the play and we executed it well. They stayed focused and pulled the game out,” Genwright continued.

Evans led the Panthers in scoring with 16 points and Hurley had 12, including three three-pointers. Kyric Davis scored nine points and Brandon Pope had eight in the winning cause.

The Warriors were led by Jamichael Davis’s 16 points and Jayden Dover chipped in eight in the losing cause. 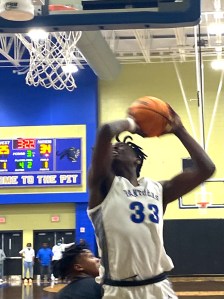 The Panthers will now prepare for the Knights of Windsor Forest, a school from the Savannah area. The Knights (21-5) defeated Sandy Creek on the road 47-37 to advance to the Elite Eight stage of the tournament. The last time SCHS advanced this far was in 2020. That year, the Panthers were 29-0 before falling to St. Pius X 73-70 in double overtime in Atlanta. Tip off between the Panthers and the Knights is scheduled for Wednesday, March 2 at 7 :30 p.m. This game will follow the Sumter County girls’ Elite Eight matchup against Westminster, which will tip off on Wednesday, March 2 at 6 p.m. at the Panther Pit (Sumter County HS gymnasium).