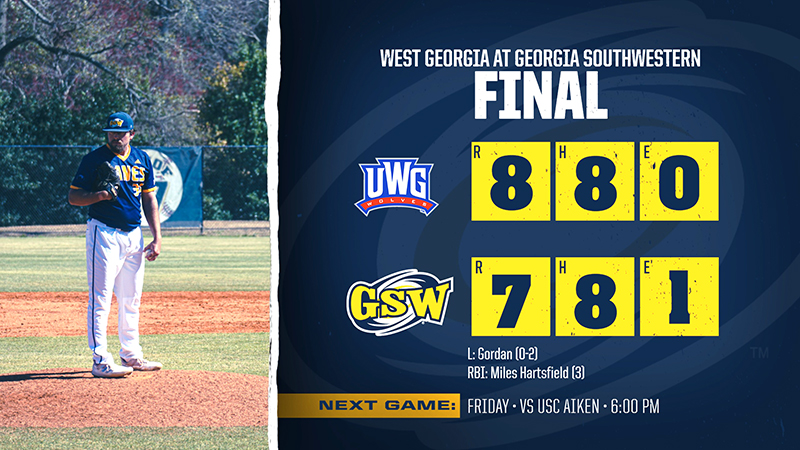 GSW redshirt sophomore pitcher Brandt Sundean struck out four batters and walked one in four innings of relief work in the Hurricanes’ 8-7 loss to West Georgia on Tuesday, March 1. Photo by GSW Athletics

AMERICUS – The Georgia Southwestern State University Baseball Team (GSW) lost a home midweek contest versus West Georgia by the score of 8-7 on Tuesday night, March 1 at the GSW Baseball Complex. The Wolves of West Georgia started the game with back-to-back doubles and put up a three-run inning in the top of the first. The Hurricanes in the bottom half brought the game to 3-1, coming up again in the second inning to answer with a three-run inning of their own to take a 4-3 lead.

That lead would stay at one until the bottom of the seventh inning when they would tack on another two runs in the inning, adding one more in the eighth to take a 7-3 lead into the top of the ninth. A few walks and some timely hits in the ninth added up to five runs for West Georgia, giving them a one-run lead going into the bottom of the ninth. The Hurricanes got a runner on and in scoring position but the GSW bats couldn’t even the game upending the game for the Hurricanes.