Tamarack Foods will be located at 119 Old Andersonville Road, Americus in the former “Glover” building.  The building will serve as the production and management office for Tamarack.  They will be producing battered and fried protein products through their Tempura & Tempura Chicken line under the inspection of the USDA.  Tamarack is a family-owned business with the Americus location being a sister company to B and D Foods out of Boise, Idaho. 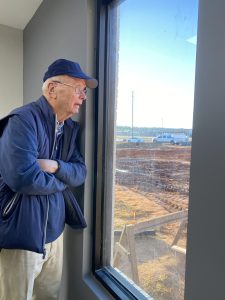 Bill Harris, Sr. looks at the construction of Tamarack as a former owner of the Glover building he says, “It makes me feel great to see this building come back to life.”

Americus Times-Recorder had the pleasure of touring the facility while under construction.  Guiding us on the tour was Tim Anderson, President of Tamarack Foods.  We were joined by Bill Harris, Sr. former owner of Glover Wholesale; Carolyn Wright, Office Manager of Tamarack Foods and Lee Kinnamon, Mayor of Americus.  Before we began the tour, Harris stated while looking out the window of one of the administrative offices, “It makes me feel great to see this building come back to life.”

After spending five years working with a national food broker searching for a building, Anderson spoke of how the existing plant in Americus was a logical fit for the company.  The large freezer, essential for production of their product, was the most attractive feature as it had 20,000 square feet of frozen space and a specially insulated floor. They were not searching for southwest Georgia per say but needed to be in the region.  Anderson visited the location mid 2020 then closed on the facility in October of 2020.

The flow of production through the building is very precise with cold and warm areas depending on the part that area plays in production. Preparation begins when raw chicken is accepted on a loading dock, the chicken then goes to the cutting room. 5,000 pounds of cut chicken is then loaded into a hopper where it goes into a vacuum container so that the chicken can expand and absorb moisture. At this point, some of the chicken will be injected with flavors if marinating is required for the finished product.  The chicken is then transferred to a tote where it will wait to go into production.

Production begins with the chicken being loaded into a hopper where it is pre-dusted with a flour mixture.  “This is kind of the beginning of the ‘secret sauce’, I’m not going to tell you too much about that because I’d have to kill you.” Anderson joked.  After pre-dusting, the chicken is battered, fried, then battered and fried again. Anderson explained, “This is a very unique process that gives us a really unique surface on the product which allows it to hold up to four or five hours in a deli hot case and still be crunchy.” Once battered the protein then goes through a double fry process.  Approximately 9,000 pounds of protein per hour will be produced in this facility.

Tamarack is in the process of hiring with a goal of having three shifts of workers.  Two production shifts followed by one cleaning shift.  Initial staffing will be at 40 with the potential of 150 employees when fully operational. The building has a very nice locker room where each employee will have their own locker and a large breakroom/cafeteria where employees can bring a lunch or eat lunch off of the line. Their website states that they are proud to build a company where employees look forward to coming to work each day and feel valued for their unique skillsets and contributions.  People interested in applying for a position at Tamarack are encouraged to go to their website www.tamarackfoods.com and click on the “Apply here” tab at the upper right corner. 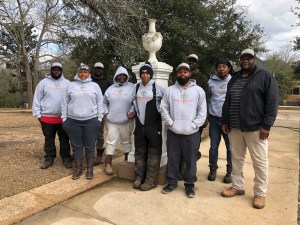 Anderson stated that they are a company who believes in community.  So much so that they had newly hired employees use some of their work hours to volunteer in the community.  Mike Sistrunk, Public Works Director stated, “I would like to thank Tamarack Foods, LLC, a new manufacturing company opening up in March, for providing newly hired employees to donate work time to this great city by cleaning and pressure washing our parks such as the grounds and playground equipment at Muckalee Park and the Founders Park, where all the sidewalks and benches and some of the stone monuments were cleaned.  To see a new company coming to Americus to step forward and want to make Tamarack LLC, a great partner for their new community is wonderful. I would like to thank Keffery McCuller (Street Division) for facilitating the equipment needed and delivered to the eight employee volunteers, and initiated projects for these volunteers to do. I hope this will inspire other businesses and individuals to help Americus be more beautiful and an inviting city for our citizens and visitors.”.  Tim Anderson said, “Tamarack Foods is very excited to start operations in Americus this Spring.  We are looking forward to being part of the local community and feel privileged to contribute to beautifying local parks and historical sites.”  When asked about the Tamarack employees who volunteered, Mayor Lee Kinnamon said, “I am excited that Tamarack Foods, one of our newest local industries, is already engaging in the community and providing volunteers to assist the City of Americus with several projects. We are grateful for their help and wish them great success with their new Americus operations.”

After spending some time on this tour with Mr. Anderson and Carolyn, Americus Times-Recorder is confident that they will be a wonderful addition to this community.  Welcome to Sumter County!