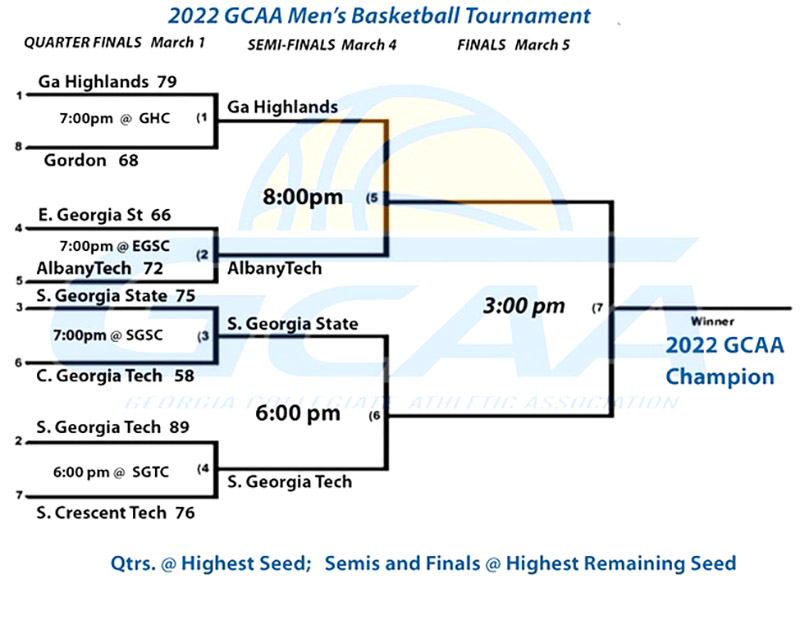 Brackets for the finals GCAA Division I games in the NJCAA Region XVII tournament. Photo by SGTC Athletics

South Georgia Tech and South Georgia State met in the NJCAA Region XVII semi-finals last season in Waycross.  The Hawks won 73 – 67 and advanced to the finals where they defeated East Georgia State College 75 – 69 for the right to compete in the NJCAA Division I men’s basketball tournament in Hutchinson, Kansas.  Coach Ballauer and the Jets are hoping for a different outcome this season.

The two teams have met twice this season and split decisions.  South Georgia Tech won in Americus 86 – 85 in January and the Hawks won 73 – 71 in February in Waycross.  “This should be a good game,” said South Georgia Technical College Jets head coach Chris Ballauer.  “We have played twice and either game could have gone either way.”

The Jets are now 20 – 11 on the season and ranked second in the GCAA regular season standings.  South Georgia State College finished in third place with an identical conference record (11 – 5).  The Hawks are 23 – 8 overall.  SGTC was able to secure the second-place spot based on their two wins against Georgia Highlands, which was the only higher ranked team.  Georgia Highlands is 12 – 4 in the conference and 20 – 11 on the season. 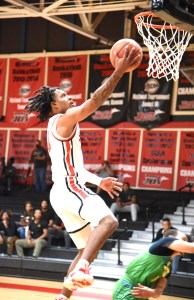 South GA Tech sophomore guard Marvin McGhee III is seen here scoring on a layup in the Jets’ 89-76 victory over Southern Crescent Tech in the quarterfinals of the GCAA men’s basketball tournament.
Photo by SGTC Athletics