Tatum and Adderton named to the Peach Belt All-Conference Team 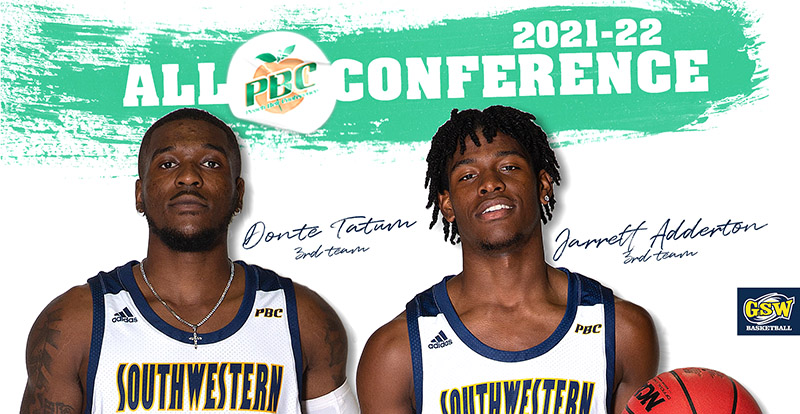 GSW senior guard Donte Tatum (left) and freshman guard Jarrett Adderton (right) have ben named to the Peach Belt Conference All-Conference Team for their performances on the court for the Hurricanes this year. Photo by GSW Athletics

AMERICUS – On Thursday, March 3, the Peach Belt Conference named two Georgia Southwestern guards as Third Team All-Conference selections. Freshman Jarrett Adderton and Senior Donte Tatum were the Hurricanes that received the honor. Both players led GSW in scoring this season and made key plays this season for the Hurricanes. 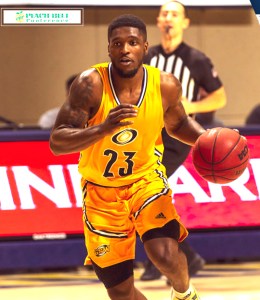 GSW senior guard Donte Tatum is seen here in action. Tatum averaged 14.4 points per game and 1.3 steals per game this year. He also led the Hurricanes in scoring in four of GSW’s first six games of the season.
Photo by GSW Athletics 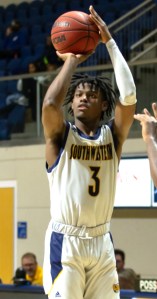 GSW freshman guard Jarrett Adderton is seen here shooting a free throw in a game against North Georgia. He averaged 14.1 points per game and shot 36.6 percent from beyond the arc.
ATR Archive

Adderton had a stellar freshman season coming on strong in the second half of the Hurricane’s season. The freshman from Thomaston, GA averaged 14.1 points per game and shot 36.6% from beyond the arc. Adderton started the season at a slow pace, but everything seemed to click for him in a matchup with Johnson C. Smith on December 5th. That night, he scored a season-high 33 points and made nine three-point field goals in the contest. Adderton continued his high level play from that point on leading to All-Conference honors for the freshman guard.

The All-Conference team is listed below, as selected by the league’s head coaches.  Coaches were not permitted to vote for their own players.  Due to a tie in the voting, six players were named second-team All-Conference with four players on the third team.