AMERICUS – Having reached the Elite Eight (state quarterfinals) for the first time since 2020, the year they won a state championship, the Sumter County Lady Panthers (SCHS) came into Wednesday night’s GHSA Class AAA state quarterfinal matchup against Westminster (WS) with high hopes of scoring another victory and moving on to the state semifinals in Milledgeville. Unfortunately, however, the turnover bug bit the Lady Panthers far too many tines against the Wildcats. Those turnovers, coupled with the Lady Panthers’ inability to hit outside shots, as well as breakdowns on defense, proved to be fatal to their hopes of advancing and possibly playing for Sumter County’s second state championship in three years. Sadly for SCHS, there will be no repeat of 2020, as the Lady Panthers fell to WS 48-36 in the Panther Pit.

With the loss, the Lady Panthers conclude their season with an overall record of 23-7, while the Wildcats improve to 17-10 and will advance to the GHSA Class AAA State Semifinals at Georgia College in Milledgeville, where they will play Lumpkin County on Saturday, March 5 at 2 p.m.

“We were a step short the entire night,” SCHS Head Coach Sherri Harris said. “We didn’t win the hustle points like we normally do. We shot ourselves in the foot with a lot of unforced turnovers and against a good team like this, you can’t do those type things. I hate for it to happen like this for our seniors (Trinity Jackson, Tiffani Goodman and Kaylin Holley), but I think all three of them are going to be ok. They’re great students academically, so I think they will land on their feet.” 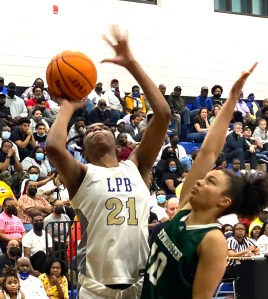 In spite of the loss, Harris is extremely proud of her squad for its accomplishments this year. “It was an outstanding season. I would have never thought it would turn out this way considering the way it started,” Harris said. “I just hate for it to end, mainly for our seniors. We just didn’t play Lady Panther basketball and I say that because the mistakes on defense, we normally don’t make those. I can deal with making mistakes and different things on the offensive end, but not on defense. That’s our bread and butter and when we make mistakes like that, it’s not good,” Harris continued.

SCHS junior guard Aviyonna Clemons led the Lady Panthers in scoring with 13 points and senior point guard Tiffani Goodman scored 12 in her final game as a Lady Panther. Senior forward Trinity Jackson scored seven in the final game of her high school career and both senior Kaylin Holley and freshman Cornecia Luster each scored two points to round out the SCHS scoring.

The Wildcats took a 3-0 lead early on a three-pointer from Stella Chartrand, but the Lady Panthers quickly responded with four straight points on baskets by Goodman and Jackson. Over the next several minutes of the first quarter, it was a back and forth affair, with both teams trading baskets, but in the waning seconds of the quarter, Jada Bettis was able to make one of two fouls shots to give WS a 12-11 lead by the end of the first quarter.

Turnovers were a problem for the Lady Panthers in the first quarter. They tried to make entry passes into Jackson on the low post, but some of those passes were intercepted by the Wildcats.

During the first three minutes of the second quarter, both teams were struggling offensively, but the Lady Panthers were still struggling with turnovers, as WS shooting guard Courtney Ogden would intercept a pass and score on a layup to give the Wildcats a 17-13 lead. Shortly thereafter, Ogden drained a three-pointer with 3:02 to go to give WS a 20-13 lead and this prompted Harris to call a timeout.

After several minutes without a basket, the Lady Panthers got a basket from Clemons that brought them to within five at 20-15, but Ogden countered with another jumper from the top of the key and the Wildcats’ lead was back up to seven. With les than 30 seconds left before halftime, the Lady Panthers were trying to hold for the last shot, but another turnover allowed Ogden to sink two free throws with 3.8 seconds left to give WS a 26-17 lead at the half.

Turnovers were clearly the main problem for the Lady Panthers in the first half, as some of them resulted in points for the Wildcats at the other end. 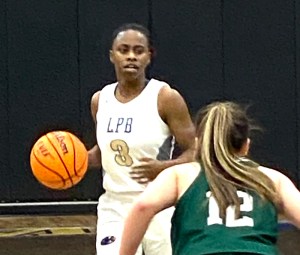 Over the first four minutes of the third quarter, both teams traded baskets, but the Lady Panthers were able to cut their deficit to 30-23 when Holley found Clemons on the inside for a basket. Jackson would have a chance shortly thereafter to cut the SCHS deficit to five when she was fouled in the act of shooting, but missed both foul shots. Free throws were somewhat of a factor in this game. The Lady Panthers went three for eight from the foul line, while the Wildcats shot nine of 13.

With 1:35 left in the third quarter, Ogden struck again for the Wildcats, but SCHS was able to get a steal and a basket from Jackson to keep the Lady Panthers within seven at 32-25 with one more quarter to play.

After three quarters, the Lady Panthers found themselves down by seven with their season and their goal of hanging another state championship banner hanging in the balance. They had eight minutes to change the situation.

Over the first minute and a half of the fourth quarter, SCHS gave its fans a ray of hope, as the Lady Panthers went on a 5-4 run that was capped off with a basket from Gooden. However, over the next minute or so, they missed on a few three-point attempts and the Wildcats took advantage when Chartrand drilled a three-pointer from the corner to give WS a 40-30 lead. Chartrand would later knock down two more foul shots and the Wildcats would force a turnover that resulted in another basket by Ogden. Just like that, the Lady Panthers found themselves down 44-30 with 2:40 to go in the game and needing a miracle at this point.

With 1:33 to go, Goodman was able to drill a three-pointer to bring SCHS to within 11, but that would be as close as they would get as the Wildcats would go on to end the Lady Panthers’ tremendous season with a 48-36 victory.

Ogden led all scorers with 21 points and Chartrand poured in 18 for WS in the winning cause.