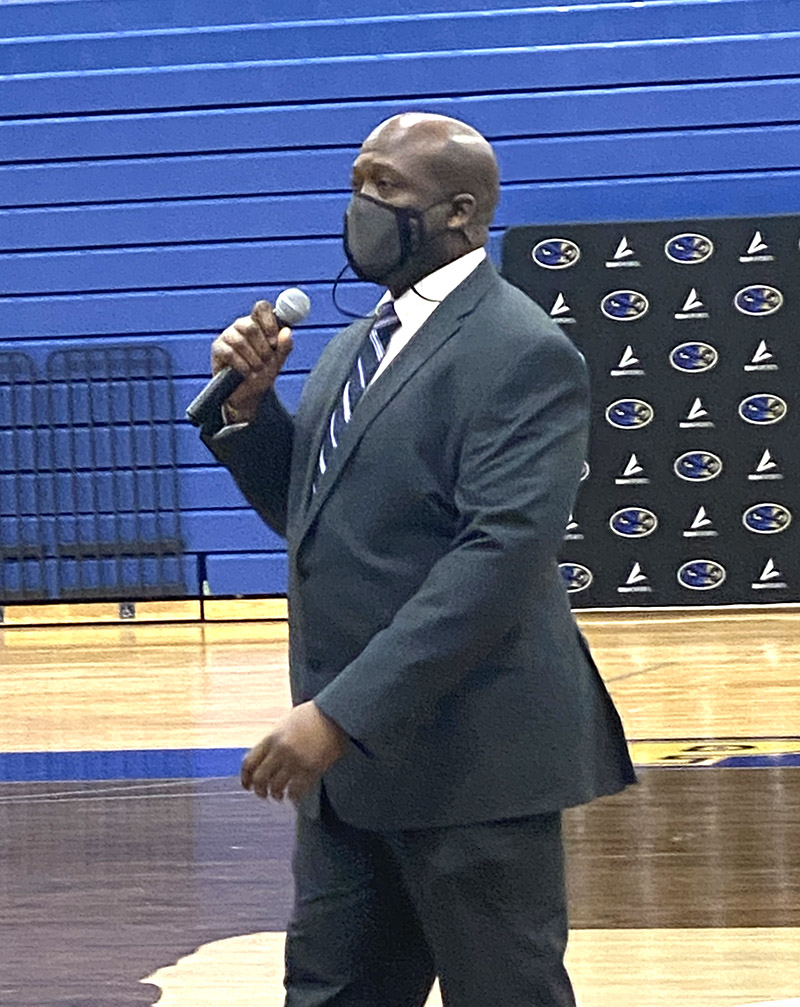 Newly hired Sumter County Head Football Coach Clifford Fedd speaks to the players and parents at a meet and greet session on Thursday, March 3 at the Panther Pit. Photo by Ken Gustafson

Fedd comes to Sumter County from Dutchtown High School in Hampton, GA. During his five-year tenure as the head coach of the Bulldogs, Fedd led DHS to five straight playoff appearances and posted a win-loss record of 43-16. During his speech to the players and their parents, Fedd stated that from 2004 until he arrived at DHS in 2017 to assume the head coaching position, the Bulldogs had only made the state playoffs one time.

“I’m definitely a playoff-caliber coach,” Fedd said. “We don’t talk about just having a winning season. We talk about making it to the playoffs, wining region titles and getting into the playoffs and making a run. That’s Coach Fedd,” He continued.

A native of Jacksonville, FL, Fedd played junior college football in California before finishing his playing career at Valdosta State. He began his coaching career at Brooks County in 2001 as an assistant coach from 2001-07. He then went over to Berrien County and for three seasons before moving back to Brooks County, where he was an assistant coach from 2011-2017. In total, Fedd has coached high school football for 20 years and this year will be his 21st.

Fedd has an associate’s degree, a bachelor’s degree and a master’s degree and he emphasized his intention to make sure that education will be the top priority for his players.

Fedd went on to say that he is big on three things: discipline, communication and recruiting. He stated that his top priority is to make sure that his players will be taught not just football skills, but life skills as well so that they will grow up to be good husbands, fathers, big brothers and productive citizens.

In keeping with his mantra of “Bring the Hammer” Sumter County Head Football Coach Clifford Fedd brought a hammer with him to show what he intends to do to change the culture of Sumter County High School football.
Photo by Ken Gustafson

Fedd emphasized the importance of doing the work in the weight room and that ”baby sitting services are over.” He plans to have a high-paced and intense environment in the weight room so that the necessary strength goals for the players will be accomplished so that it will transfer on to the football field. “High energy, enthusiasm and a whole lot of passion going to the football field, so we will get that done the right way,” Fedd said.

He went on to emphasize that everything will be done with energy and enthusiasm.

“Everything we do, we do with energy,” Fedd said. “We don’t have time to walk around with our heads down. We don’t have time to be talking about this and that. We are here to take care of business and to get the work done. We’re here to get a job done. That’s a must. We are going to be enthusiastic about everything we do,” Fedd continued. He went on to say that the Panthers will run fast, hit hard and be aggressive at all times. He added that while his team will respect its opponents, they will fear none.

In addition to discipline, Fedd stated that communication will also be key to the team’s success both on and off the field. “Communication is a key ingredient to being successful in life. Without communication, there’s not a whole lot you can do,” Fedd said. “If young men are doing things they’re supposed to be doing and doing it the right way and then communicating when something is not right, they will be successful.”

As far as academics is concerned, Fedd stated that a player’s academic performance is of the utmost importance, so much so that if a player is failing a class, that player will be sent to a mandatory study hall and if a player is failing two classes, the player will be academically suspended and will not be allowed to play until he gets his grades up. “You can’t show up on Friday night and be ready to play if you’re not taking care of your grades Monday, Tuesday, Wednesday and Thursday,” Fedd said.

Fedd also talked about recruiting and mentioned that during his tenure at Dutchtown, 42 players signed football scholarships. He added that he and his staff will do everything in their power to see that something similar happens at Sumter County, but that the players will need to do their part as far as being disciplined, communicating and making the grades. One of those players that Fedd coached while at DHS was Alabama inside linebacker Will Anderson, who was recently named the Defensive Player of the Year in college football. “He played for me at Dutchtown High School for three years,” Fedd said. He added that his players at DHS bought into what he and his staff were trying to do and that the number one thing that was stressed while he was there was relationships. “If these young men need something, I’m there for them. Your young men need to communicate, I’m there for them. That’s what coaches do. I’m not just a football coach. I’m a player’s coach. I’m a game coach. I’m a classroom coach and we’re going to get it done in all areas of the game and all areas of life,” Fedd said. He also encouraged his players to get a Twitter account so that they could best get in contact with college coaches and he stressed that players can and should explore earning their degrees and playing football at schools other than just the “Power 5” colleges. “The name of the game is to get a free degree,” Fedd said. “That’s extremely important. That’s the name of the game. Power 5 or bust, that’s not what we’re talking about. We’re talking about going to school and getting a free degree,” Fedd continued.

This is the Sumter County 2022 football schedule.
Photo by Ken Gustafson

Fedd also stated that he would like to see community support and that he, his coaching staff and his players can’t do this alone. “We’re going to have to have all of Panther Nation support the things that we’re doing,” Fedd said. “Everything that we do is for the good of the program. It’s good for the city, good for the county and it’s great for these young men. That’s what we must do and we’ve got to come together.”

“Us means we are together. Us means it aint you. It aint them. It’s us,” Fedd said.

He also added that he plans to be out and about in the community at places like WAL-MART and Food Lion to get to know the people of the community. “That’s how it is supposed to be because I’m part of you and you’re part of me,” Fedd said.

As far as what type of offense and defense Fedd plans to use, he stated that he plans to run a spread offense and a 4-2-5 defense, but will make adjustments on both sides of the ball when they are needed. “We want to put our young men in the best situations to be successful at a high rate. That’s our job. That’s what coaches do,” Fedd said.

Near the end of his speech, Fedd told the parents that they will not have to worry about communication regarding their child’s progress and that he plans to meet with each and every one of them on the second Tuesday of every month. “The one thing I will do will be open book for my parents because I’m going to be open book to the young men,” Fedd told the parents. “We will communicate. At no point should you say ‘Well I didn’t know’. You are going to know what the kids know. The kids are going to know what we are telling you. Everybody is going to be on the same page. We are only going to have one page and that’s the Panther Page,” Fedd continued.

In a separate interview with the Americus Times-Recorder, when asked what he feels is going to be the biggest challenge in getting the football program back to a winning level, Coach Fedd stated that he and his coaching staff want to change the culture and the mentality, being that things haven’t gone well in the past few years.

“We want to give them a new mind set and create a new culture for them so we can get after some people,” Fedd said.

The team will start workouts on Monday, March 7, which will lead up to spring practice in May. The Panthers will scrimmage Marion County at Alton Shell Stadium on Saturday, May 13. On Friday, August 12, Sumter County will scrimmage Schley County at home at 7:30 p.m. Then the Clifford Fedd era begins for real when the Panthers kick off the 2022 season with a home game against Houston County on Friday, August 19 at 7:30 p.m.