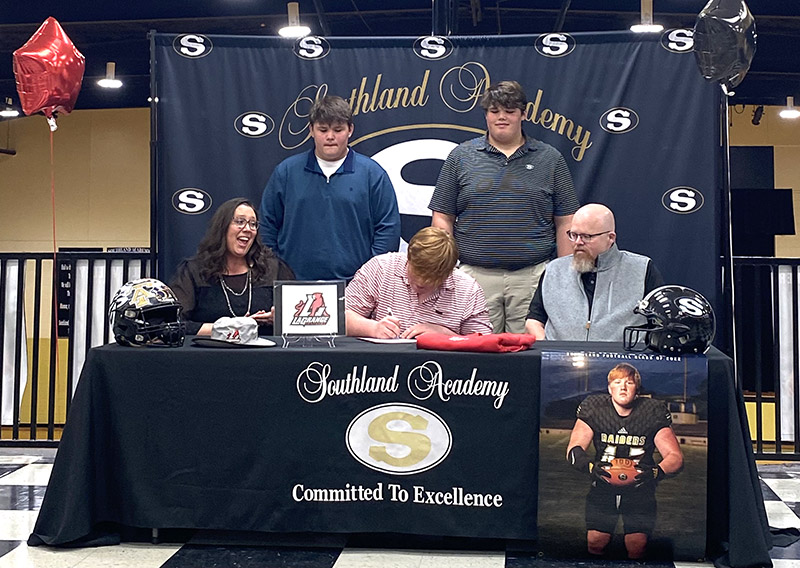 Southland Academy senior defensive lineman John Saye (middle) signs his letter of intent to play football at Lagrange College. T the far left is his mother, Le Ann Saye. Behind her is Saye’s brothers, Jack Saye (left) and Daniel Saye (right). To the right of John Saye is his father, Randy Saye. Photo by Ken Gustafson

AMERICUS – Another local high school athlete has realized his dream of playing at the next level. On Friday, March 4, Southland Academy senior defensive lineman John Saye signed a letter of intent to continue his education and play football at Lagrange College.

Saye garnered interest from other schools such as Point University and Millsaps College, an NCAA Division III school in Mississippi, but chose to sign with the Panthers.

Saye, who has played on both the offensive and defensive line, played mostly on the defensive line this year and last year. He told the Americus Times-Recorder that Lagrange recruited him to be a defensive tackle and that they plan to use him in a three technique or a head up nose guard and that he might get some reps at fullback.

Like many high school athletes, what impressed Saye most about Lagrange was that it felt like home. “It felt just like Southland….not too big, not too small. Everybody knows each other,” Saye said. “You can balance academics and athletics very well.”

Saye plans to major in Kinesiology and Exercise Science. After graduating from college, Saye would like to open his own practice in athletic training and physical therapy. In addition to being an outstanding football player at Southland, Saye also claimed an individual state championship this year as a wrestler for the Raiders.

Southland Head Coach Rod Murray has had the pleasure of coaching Saye during the past few years. “This guy was a three-year starter for us and he’s played a lot of quarters for us,” Murray said. “He has a great work ethic and great desire to be better and for his teammates to be better and he’s been a great leader for us with our younger players. He’s a solid football player. We’re so excited for him and happy for him to continue his playing career at Lagrange for Head Coach Earl Chambers, so they’re getting a good player.”