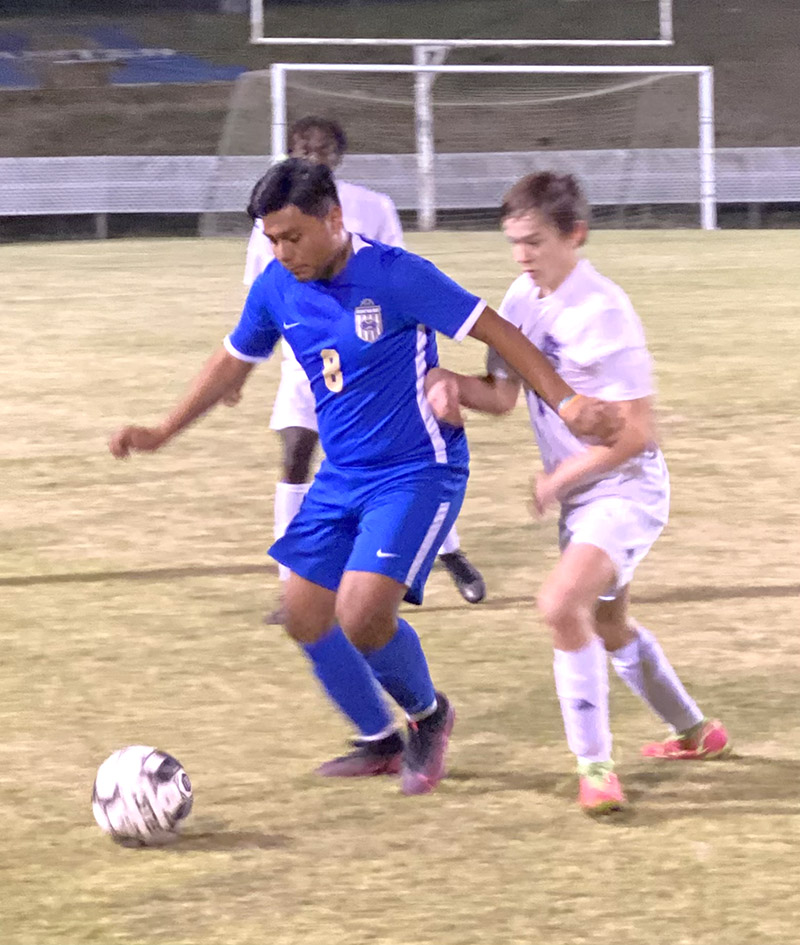 AMERICUS – For 80 minutes, the Sumter County Varsity Boys Soccer Team (SCHS) battled the Knights of Upson-Lee (ULHS) in a fierce, competitive Region 2-AAA match. However, in spite of the Panthers taking a 1-0 lead in the first half, the Knights were able to get the equalizer with less than a minute to go before halftime and would take the lead in the second half on a penalty kick. Though the Panthers tried to get the equalizer and created some chances late in the match, they were not able to come up with the tying goal and fell to ULHS 2-1 on Friday, March 4 at Alton Shell Stadium.

In spite of the loss, SCHS Head Coach Michael Pepito praised his squad for their effort in the match and summed up the result as “unlucky”.

“Number one, they (ULHS) are a great team. They came to play. We came to play. It was kind of like watching two giants fight,” Pepito said. “We had a lot of possession. We need to work on finishing, working through the middle a little bit and passing it wide and having everybody understand their roles up front. In situations like that, you just have to take your hat off and clap for them (ULHS).”
Pepito went on to say that giving up the tying goal to the Knights with less than a minute to go before halftime stung his club a little bit.

“Our kids were getting tired and it just takes one mistake or one misplay or one situation,” Pepito said. “Nobody’s at fault. There are 10 other people on the field that could have done something sooner, and so it just happened. They (ULHS) were pushing. I knew they were pushing. In the second half, with that penalty, that was unlucky! That was straight up unlucky! 0-0 second half, that game would have been, without that score, we could have easily won that game.” 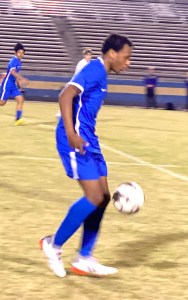 Sumter County senior midfielder Noah Felton was instrumental in the Panthers’ only goal of the game.
Photo by Ken Gustafson

In the 16th minute of play in the first half, the Panthers broke the 0-0 deadlock when Noah Felton took a shot that was not saved cleanly by the ULHS goalkeeper. Leo Diaz was there for the rebound and he put the ball in the back of the net to give SCHS a 1-0 lead.

Both teams continued to battle for the remainder of the first half, but with about 50 seconds left before halftime, the Knights got their equalizer when Noah Frey took a shot that went past SCHS goalkeeper Evan Garcia and into the back of the net.

In the first few minutes of the second half, the Knights were putting pressure on the Panthers’ back line and were creating scoring chances. Then the Knights were able to break through when Brian Ventura took a shot that was deflected by Garcia and hit the crossbar. However, the ball glanced off an SCHS player’s hand and the Panthers were whistled for a handball in the box, resulting in a penalty kick for the Knights.

Bryan Hernandez then stepped up and converted the penalty kick that ended up being the winning goal for ULHS.

Both teams battled hard for the remainder of the game and the Panthers were able to create some chances to get an equalizer. However, the Knights were able to hold on for their 2-1 victory.
The Panthers will try to rebound from this heartbreaking loss when they host Macon County on Tuesday, March 8 at 7:30 p.m.