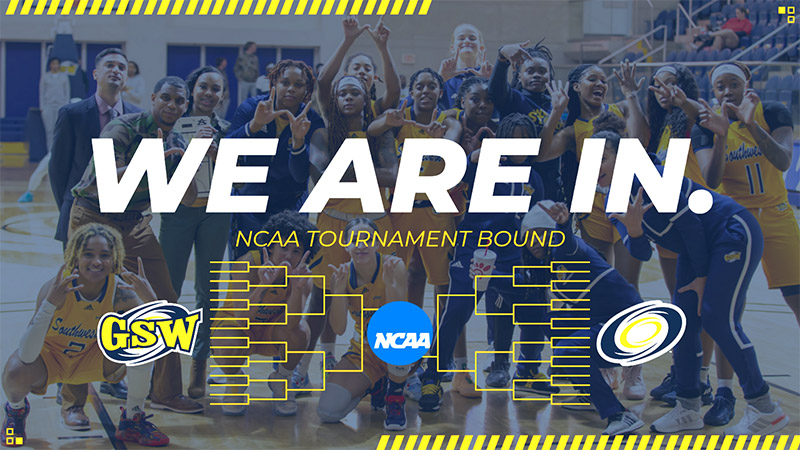 The 2021-22 Georgia Southwestern State University women’s basketball team celebrates with a team picture after learning that they were awarded an at large bid into the 2022 NCAA Division II Women’s Basketball Tournament. Photo by GSW Athletics

AMERICUS – The Georgia Southwestern State University women’s basketball team (GSW) was selected for its first NCAA Tournament bid in school history. The Lady Hurricanes posted an overall record of 22-6 and were 14-4 in Peach Belt Conference play this year. GSW will be the #3 seed and will take on Conference of Carolina’s champion Barton College (29-1), the #6 seed, in the first round of the 64-team tournament.

The Lady Hurricanes are joined by three other Peach Belt Conference members: North Georgia, Lander, and Columbus State. This gives the conference half of the available bids in the Southeast Region. Barton College has won 22 straight games and recently defeated former Peach Belt member Francis Marion to win their conference tournament and get the automatic bid to the NCAA tournament.

The eight regional champions advancing to the Women’s Elite Eight will be seeded by the Women’s Basketball Committee after completion of the regionals. The 2022 NCAA Division II Women’s Elite Eight will be held at the Birmingham CrossPlex in Birmingham, Alabama, on March 21, 23, and 25. Miles College and the City of Birmingham will serve as hosts. Game times will be announced on Monday.

The first three rounds of the NCAA tournament will be held at 1-seed North Georgia in Dahlonega, Ga.