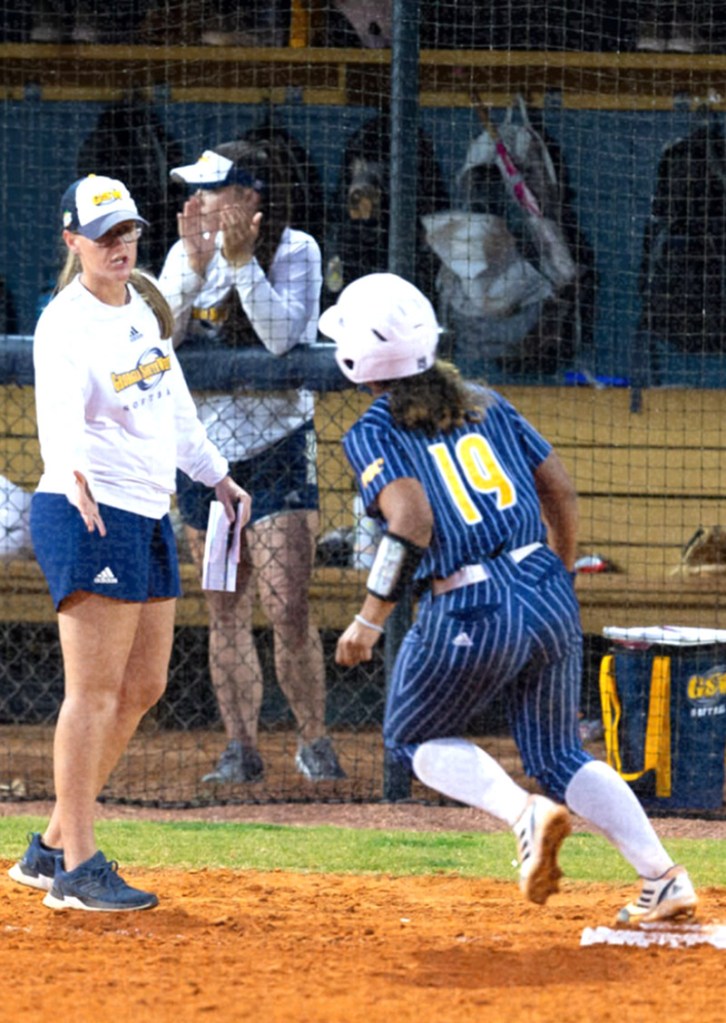 GSW sophomore pitcher Zoe Willis (19) is seen here rounding the bases. Willis belted two home runs in the Lady Hurricanes’ 9-2 victory over Young Harris College in the first game of a three-game series. Willis also had a home run in Game 2 of the series, as she went 3 for 3 at the plate with two RBIs and two runs scored. Photo by GSW Athletics

YOUNG HARRIS, GA – The Georgia Southwestern State University Softball Team (GSW) won its Peach Belt Conference opening series on the road at Young Harris College this weekend. The Lady Hurricanes won Game 1 of the Saturday doubleheader by the score of 9-2 and took Game 2 of the series by the score of 8-0 before falling to the Mountain Lions 13-5 in the third and final game of the three-game series on Sunday.

GSW moves to 12-9 on the year, having already faced three different ranked opponents in Valdosta State, Auburn-Montgomery and Lincoln Memorial. GSW will head on the road for a double-header matchup against the University of Montevallo on Wednesday, March 9 before hosting a non-conference doubleheader versus Emmanuel College (Ga.) on Saturday afternoon, March 12.

In Game 1 against YHC, GSW sophomore pitcher Zoe Willis was on fire. Willis went 3 for 4 at the plate with two home runs, a double, three runs scored and six RBIs. Regan Lee got the win for the Hurricanes while on the mound. The freshman right- hander from Callahan, FL gave up one run on five hits, walked two and struck out two to go 2-1 on the season.

In Game 2 of the Saturday doubleheader, the Hurricanes belted three home runs, as Willis, Katelyn Wood and Hailey Pinette each sent balls out of the park to lead GSW to an 8-0 shut out victory over YHC. Willis had another strong game at the plate by going 3 for 3 with a home run, two RBIs and two runs scored.

Trinity Whitefield went the entire seven innings on the hill for the Hurricanes. She gave up no runs on five hits, walked one and struck out three batters to get her third win of the season (3-3).

Game 3 did not go as well for GSW, as the Mountain Lions scored two runs in the first inning, two in the second and four in the third to put the game out of reach. Despite the bats coming alive for the Lady Hurricanes in the top of the sixth, as they scored four runs to make it a three-run game, the defense and pitching were just not enough on Sunday and the Mountain Lions answered back with five of their own to get the run-ruled 13-5 victory and avoid the sweep.