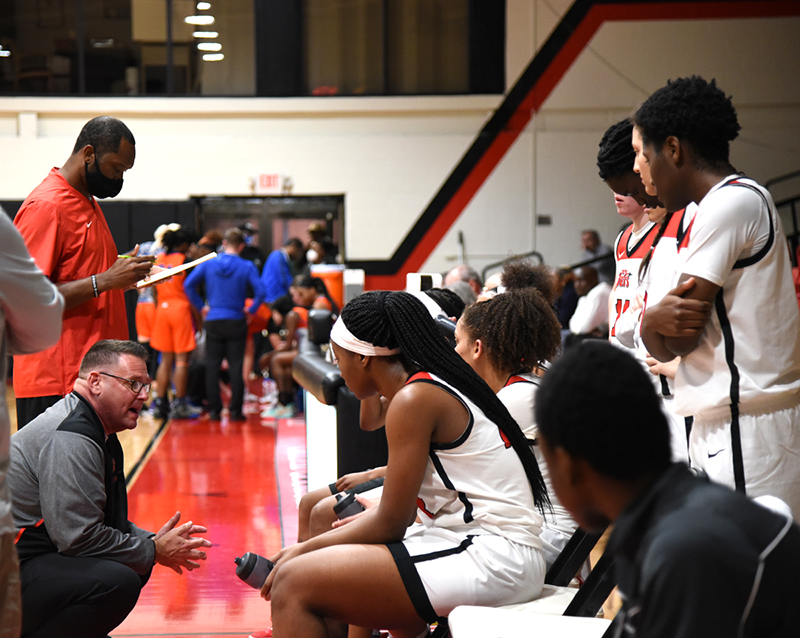 SGTC women’s head basketball coach James Frey is shown above talking with the Lady Jets during a timeout against Georgia Highlands. Photo by SGTC Athletics

AMERICUS – The South Georgia Technical College Lady Jets will be making their sixth consecutive trip to the National Junior College Athletic Association (NJCAA) Division I women’s basketball tournament which will be held March 16th – 21st at the Rip Griffin Center in Lubbock, TX.

This will be the eighth time that the Lady Jets have made the trip to the national tournament with SGTC Athletic Director and Lady Jets head coach James Frey.  It is the ninth in the history of the program.  This year, both the Jets and the Lady Jets qualified for the national basketball tournaments.  This is the second time in the 20-year history of the Jets basketball program that both teams have earned a national tournament bid.  This is the third trip for the Jets and the 12th time in 20-years that SGTC teams have advanced to the National Tournaments.  The men play in Hutchinson, Kansas, March 14th – 19th.

The Lady Jets received an at-large bid and a ninth-place ranking in the NJCAA Division I women’s tournament after losing to the 3rd ranked Georgia Highlands Lady Chargers in the Georgia Collegiate Athletic Association (GCAA) tournament finals in Rome.  The Lady Jets were ranked eighth nationally before the loss to Georgia Highlands.  They are currently 26 – 6 and seeded ninth in the tournament.

The Lady Jets will play on Wednesday, March 16th at noon CT.  They will match-up against the 24th ranked Monroe College Mustangs.  SGTC defeated Monroe College 58 – 47 November 20th at the Tallahassee Community College Classic in Tallahassee, FL.  The winner of the Monroe – South Georgia Tech game will advance to the next round to face 8th ranked Arizona Western on Thursday, March 17th at 4 p.m. CT.

“Monroe poses a difficult matchup for us, because we have played them and won,” said SGTC Athletic Director and Lady Jets head coach James Frey.  “But that was four months ago and from watching them on film they have really improved.  I think Coach Warner does a fantastic job of getting his team to play hard and they are well disciplined.  People see their 14 – 14 record and take them for granted, but they played an incredibly difficult schedule early on.  They played in a tipoff classic in Texas and then the Thanksgiving Classic at Tallahassee.  I have a tremendous amount of respect for them.”

Monroe College has over 8,000 students. It is a New York-based college with campuses in Bronx, New Rochelle, and St. Lucia. The Lady Mustangs are averaging 63.5 points per game, hitting 36.8% of their shots from the field, 27% of three-point attempts and 66.4% of their foul shots.  They bring down 44 rebounds and average 14.1 assists each outing.  They also average 12 steals per game and 3.2 blocks.

The winner of the Monroe – South Georgia Tech game will advance to the next round to face 8th ranked Arizona Western on Thursday, March 17th at 4 p.m. CT.  “I don’t know a lot about Arizona Western other than they are 29- 2 and have had an incredible season,” said Coach Frey.  “I will start doing some scout work on them towards the end of the week when I finish my Monroe scout.  Assistant Coach Demetrius is already watching film on them.  I am a superstitious person and believe in respecting the game and focusing on our next opponent but I also believe in having our team prepared for whatever is next if we should win.”

Coach Frey said that the Lady Jets biggest challenge may also be their biggest strength, and that is youth.  “It is a challenge because only two of our ladies have played in the national tournament,” explained Frey.  “But that may also be a strength in that they don’t fear much.  They kind of just go at things full speed and don’t really get bothered by the moment.  We have been playing good, ranked teams all throughout the season and I think some of our best games of the year from a performance standpoint have been those games.”

Georgia Highlands Lady Chargers, the GCAA Tournament Champions and Southeast District Representative, received the 3rd seed in the tournament and a first-round bye.  They are scheduled to play the winner of the 14th ranked Casper College – 19th ranked Hutchinson team on Friday, March 18th at 5 p.m.  The Lady Chargers are coached by former SGTC Coach Brandon Harrell.

All games will be livestreamed (for a fee) here:  https://www.njcaa.org/network/landing/index.