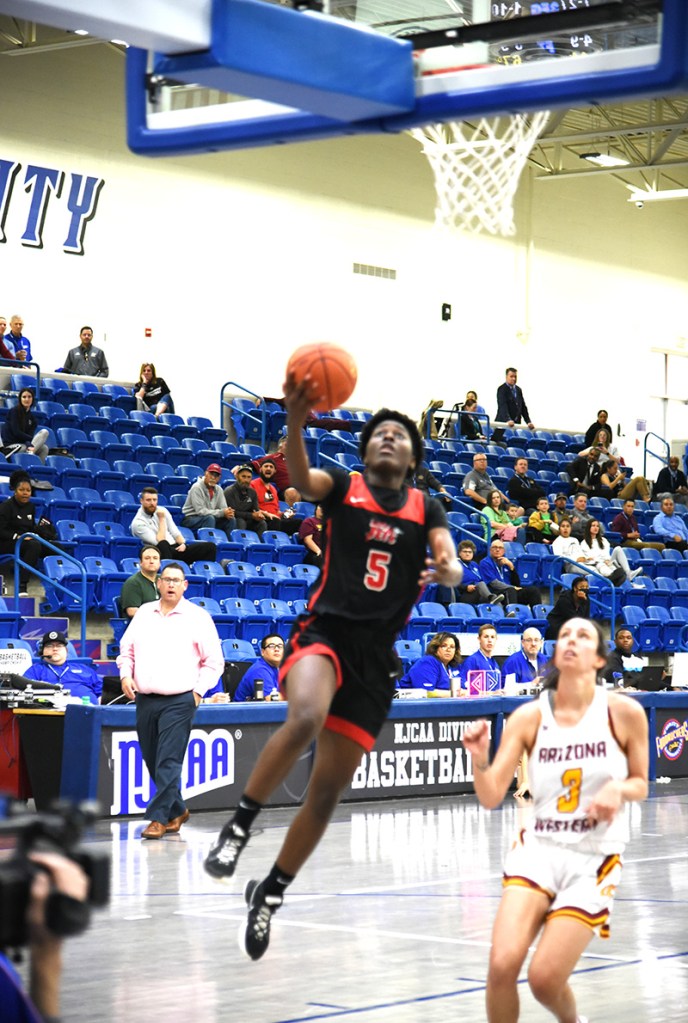 Alexia Dizeko (5) was the leading scorer for the Lady Jets in the loss to Arizona Western. Photo by SGTC Athletics

“The girls are disappointed,” said South Georgia Technical College Athletic Director and Lady Jets head coach James Frey.  “We got down early but we had the opportunity to come back and try to pull it out.  We cut the deficit to nine points in the fourth quarter but then we missed four free throws and two layups.  If we make any of those and pull within three or five points, things could have ended differently.”

Despite the outcome, Frey is very proud of the Lady Jets and the season they put together.  “We wound up 27 – 7 and made it to the Sweet Sixteen in the National Tournament with nine freshmen.  That is something to be proud of.  The loss stings right now.  We wanted things to go differently but we can regroup now and begin planning on how to do better next year.” 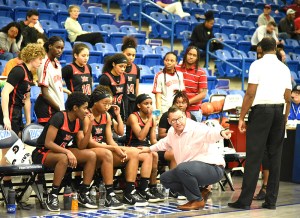 South Georgia Tech Head Coach Frey is shown above talking with his team during a timeout in the Lady Jets’ second round game against Arizona Western.
Photo by SGTC Athletics

Only one Lady Jet scored in double digits.  Freshman Alexia Dizeko had 14 points, seven rebounds, and one steal to lead South Georgia Tech.  Sophomore Kamya Hollingshed ended the game with eight points.  She made the Lady Jets only three-point bucket of the night.  She was followed by sophomore Maikya Simmons and freshman Fanta Gassama who both had seven points each.   Luana Leite added six points, and Camryn James and Susana Yepes closed out the scoring with two points each.

Arizona Western will not advance to the NJCAA Elite Eight bracket.  They will play the 18th seeded Tyler Texas team, which upset the top ranked Three Rivers team earlier in the day.  That game will be on Saturday.  The finals will be played on Monday, March 21st.