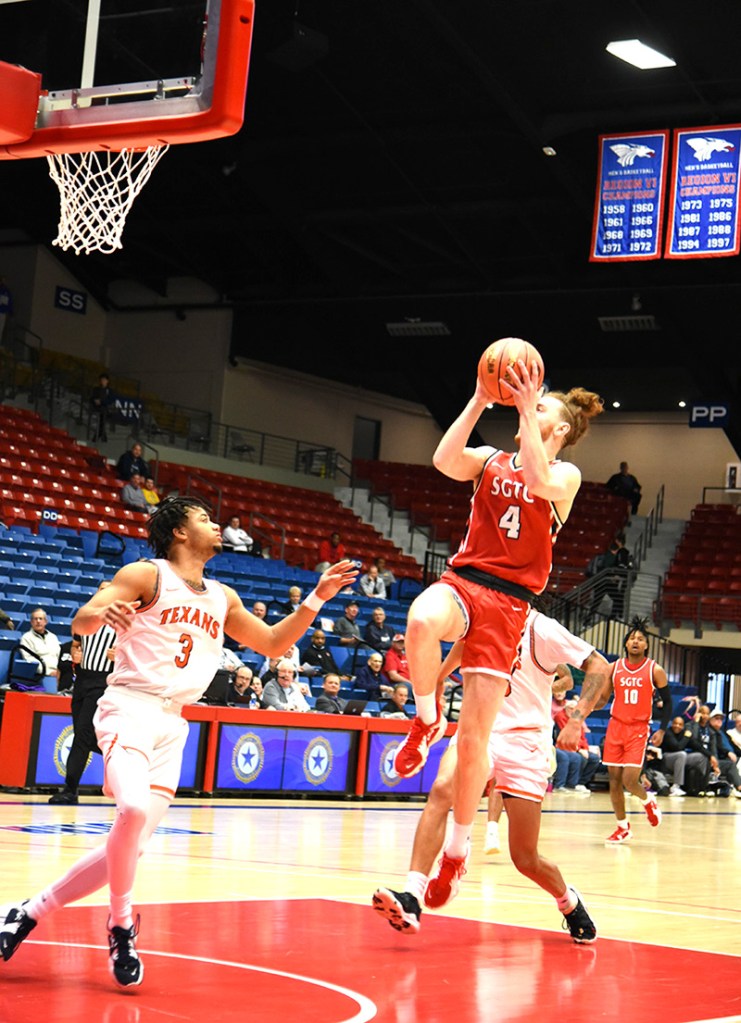 SGTC sophomore point guard Will Johnson (4) was the leading scorer for the Jets in the NJCAA National Tournament game against South Plains with 21 points. He also had four assists and two steals. Photo by SGTC Athletics

“I am very proud of these guys,” said South Georgia Technical College Jets head coach Chris Ballauer.  “This is the first time any of them had played in a national tournament and I think they surprised some people with how well they performed.  I am not sure the guys realize what they accomplished this season, but winning the District tournament and having the opportunity to play in a national tournament is a successful season.  We would have liked to have gone further, but we represented our state, conference, and college very well.”

SGTC first year head coach Chris Ballauer was spotlighted as the beginning of the game with the NJCAA Southeast District Coach of the Year award.  Steve Showalter of the Hutchinson American Legion and host of the Jets, made the presentation to Ballauer before the two teams stepped on the court.  Ballauer led the Jets to a 22 – 12 record this season, a second-place finish in the Georgia Collegiate Athletic Association regular season and the GCAA tournament championship title as well as the NJCAA Southeast District title for Region XVII. 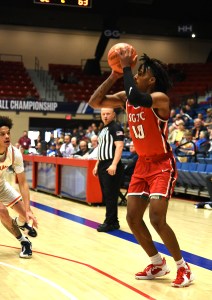 SGTC sophomore guard Marvin McGhee III (10) tossed in 20 points and had 11 rebounds for a double-double night against South Plains in the NJCAA National Tournament.
Photo by SGTC Athletics

South Plains bounced back and took a 32 – 31 lead with less than four minutes in the half.  They stretched that lead to six points before the Jets closed the gap to two points, 40 – 42 at the half.  Marvin McGhee was the only Jet in double-figures at the half with 13 points but Jalen Reynolds, Will Johnston, and Justice Hayes were balanced scorers with six points each.

Despite being down by two points at the half, the Jets came back and sank the first basket to tie the game at 42-42 in the first 15 seconds of play.  They were able to pull ahead by seven points before South Plans tied the game at 58 – 58 with 10:45 remaining.   The two teams battled back and fourth for the next three minutes and the game was tied 67 – 67 with 7:52 remaining.  South Plains was able to pull ahead by 10 points in the final five minutes and the game ended with the Texans upending the Jets 88 – 80.

Sophomore point guard Will Johnston led the Jets in scoring with 21 points and sophomore guard Marvin McGhee, III was close behind with 20 points.  McGhee also led the team in rebounding with 11 for a double-double day. Malik Battle was the only other Jet in double-figures with 11 points. 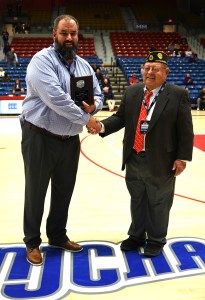 Steve Showalter of the Hutchinson American Legion and team host for the Jets, is shown above (right) presenting SGTC’s Chris Ballauer with the NJCAA Southeast District Coach of the Year award prior to the Jets – South Plains game.
Photo by SGTC Athletics

“South Plains shot the three-point ball much better than they had all season,” said Chris Ballauer.  “They hit nearly 40% of their outside shots and they outrebounded us 42 – 34.”  The Texans also scored more points in the paint, had more second chance points and their bench outscored the Jets bench two to one.

“I believe we were pretty evenly matched and we had the opportunity to win, but at the final buzzer, they were the ones on top,” said Coach Ballauer, who was quick to add that not many people expected his team to win the District and advance to the National Tournament with a first-year head coach.

“We had some adversity this season, but these guys did what we asked them to do and they got to the national tournament on the 75th anniversary of the NJCAA men’s Division I playoffs.  That is pretty impressive,” said Ballauer.

This is only the third time in the 20-year history of the Jets program that they had advanced to the National Tournament.  Steven Wright, former SGTC Jets head coach took the Jets to the nationals in 2009 and 2014.  Chris Ballauer, the fifth head coach of the Jets, secured the third trip.

Both the Jets and the Lady Jets earned the right to advance to the national tournament.  This was only the second time in 20-years South Georgia Tech had two teams nationally ranked.  The other time was in 2014.