BUENA VISTA, GA – Thanks to the performances of Schley County pitchers Trypp Lumpkin, Ridge James and Owen Lamb, the Wildcats were able to secure a 7-0 shut out victory over their Region 5A-Public rivals Marion County on Thursday, March 17 at Marion County High School.

Lumpkin pitched the first two innings and gave up one hit and one walk while striking out four. James came on in relief of Lumpkin and struck out four batters while walking two and gave up just one hit. 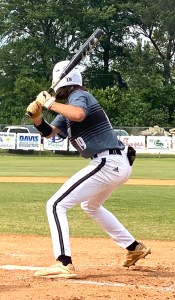 In addition to striking out three batters in 1.2 innings of work, Schley County’s Owen Lamb went 2 for 4 at the plate with a double, a triple, three RBIs and a run scored to help lead the Wildcats to a 7-0 win over Marion County.
ATR Archive

Owen Lamb was the final pitcher used by the Wildcats. In 1.2 innings of work, Lamb struck out three batters and walked one. In total, these three SCHS pitchers combined to strike out 11 MC batters.

Offensively, Lamb provided much of the production for the Wildcats by going 2 for 4 at the plate with a double, a triple, three RBIs and a run scored.