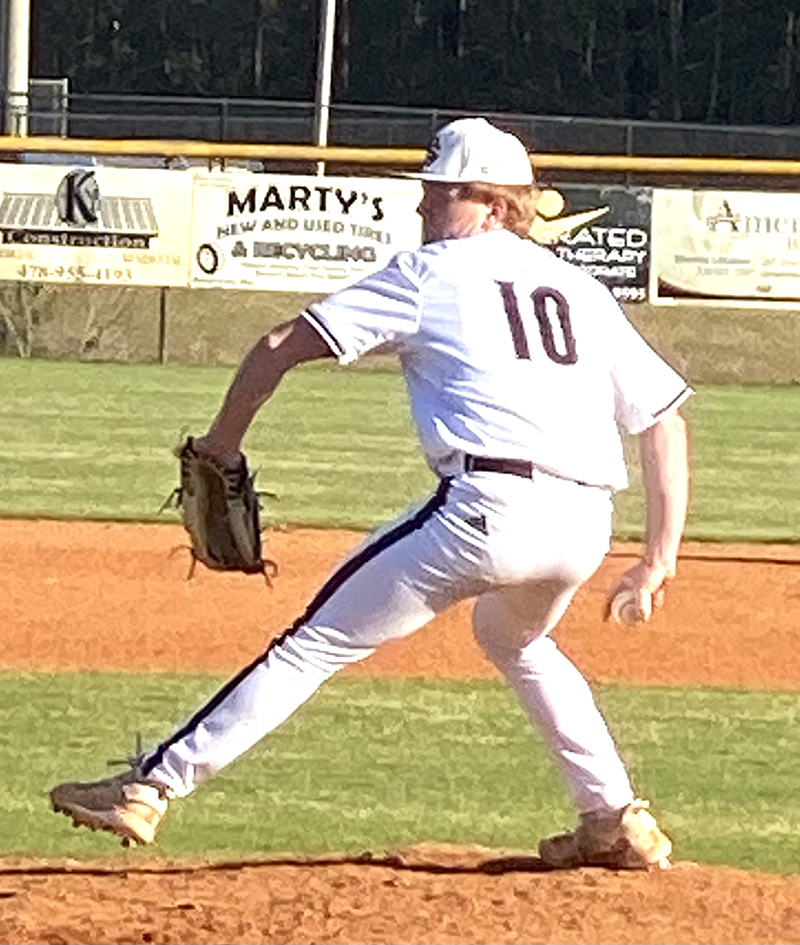 Schley County starting pitcher Ashton Raybon pitched two scoreless innings against Lee County. He gave up one hit, walked one and struck out one. Photo by Ken Gustafson

AMERICUS – After a disappointing 15-8 loss to Westfield in Perry on Saturday in which the Wildcats committed eight errors, the Schley County High School Baseball Team (SCHS) came into its contest against the Lee County Trojans hoping to make amends with a victory. However, though the SCHS pitching and defense were much better than on Saturday against the Hornets, the Wildcats’ offense was absent against the Trojans and it resulted in a 2-0 defeat for SCHS at the hands of Lee County on Monday, March 21 at Schley County High School.

For the Wildcats, it was unfortunate that the bats could not get going against LC pitchers Gaven Smith and Billy Myles, especially considering that the SCHS defense turned an extremely rare triple play in the top of sixth inning. With runners at second and third for the Trojans and nobody out, Garrett Page hit a line drive to SCHS third baseman Jack Clark. Clark caught the line drive and then tagged out Peyton Tomkins, the runner at third, for the second out. Clark then threw the ball across to first baseman Trenton Stubbs and doubled off LC base runner Brayden Proctor to complete the triple play, ending the Trojans’ threat.

“It was a really good play. Jack made a great play and threw it across to first. That was good,” SCHS Head Coach Chuck Cheek said.

“We turned two double plays and a triple play. We got out of some jams and threw two freshmen (Aston Raybon and Brody Smith) out there for six innings and Ashton and Brody did really well. They both threw some Saturday so we had a little bit of a pitch count.” In two innings of work, Raybon, who started on the mound for the Wildcats, pitched two scoreless innings, giving up only one hit with one walk and one strikeout. Brody Smith came on in relief of Raybon and gave up one run on four hits with one strikeout in four innings of work. Owen Shufflebarger was the third and final pitcher used by SCHS. In one inning of work, Shufflebarger gave up one run on three hits walked one and struck out one. 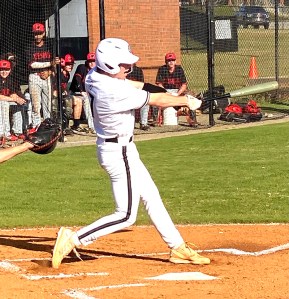 Schley County shortstop Carson Westbrook was one of three Wildcats to earn a hit against the Trojans.
Photo by Ken Gustafson

However, while he was pleased with his team’s defense and the pitching performances of Raybon, Smith and Shufflebarger, Cheek was extremely disappointed in his club’s offensive performance and their approach at the plate. The Wildcats were only able to muster three hits against the Trojans, compared to nine hits in their loss to Westfield.

“I just told the guys that if you told me we would only give up two runs, I’d tell you we would win. We didn’t hit today,” Cheek said. “I’m the hitting coach and that’s in me and that’s frustrating. We have to do a better job at the plate with our approach. We’re getting behind in the count with pitches that we should probably be staying on and driving the other way and we are chasing pitches that we should be taking. That’s not a good approach. There were a lot of things that were set up for us to have some success swinging the bat today and we didn’t swing it.” 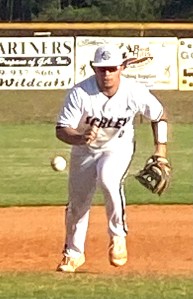 Schley County third baseman Jack Clark fields a ground ball against Lee County. Clark was part of one of baseball’s rarest plays: a triple play that was turned by the Wildcats in the top of the sixth inning against Lee County.
Photo by Ken Gustafson

Cheek went on to say that his club’s performance in the loss at Westfield on Saturday was “absolutely awful” and that it was one of the worst performances in a couple of years. “Our pitching was bad. Our defense was really bad, so it was nice to see that both of those issues were really good today,” Cheek said. “Our hitting was good Saturday. If we can get it all together on the same day, we’re going to be good.”

The Trojans took a 1-0 lead in the top of the third inning. After Cameron Paul led off the inning with a single, Tripp Thomas advanced Paul to third base on a fielder’s choice, Then Gavin Brinkley reached on an error that allowed Paul to score. The Wildcats had a chance to tie the game in the bottom of the third when Carson Westbrook singled with one out, but Smith struck out Brody Fuller and got Jack Clark to ground out to third to end the inning.

LC added to its lead in the top of the seventh when Caden King led off with a triple and scored on a passed ball. In the bottom of the seventh, the Wildcats were retired in order, as LC reliever Billy Myler struck out the side to end the game.

Westbrook, Clark and Owen Lamb were the only Wildcats to earn hits off LC pitching, while Cameron Paul led the Trojans’ offense by going 3 for 3 at the plate with a run scored.

The Wildcats (8-3) are currently on a two-game losing streak and will try to end that steak when they head down to Leesburg on Thursday for a rematch against these same Lee County Trojans. First pitch is scheduled for 5:45 p.m.