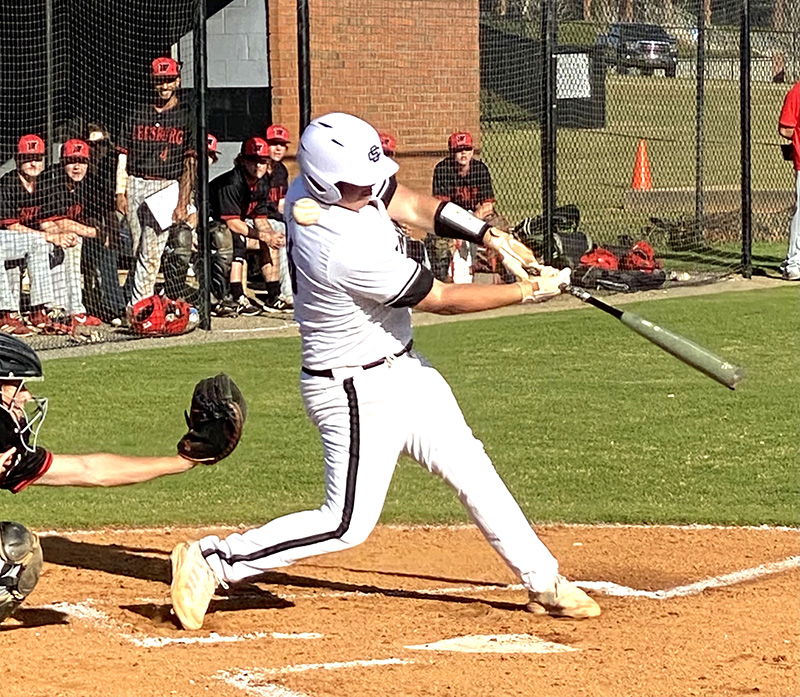 Schley County’s Trenton Stubbs went 1 for 2 with a two-run single in the top of the sixth inning to help the Wildcats tie Lee County at 4-4 before the Trojans scored seven runs in the bottom of the sixth to hand SCHS an 11-4 loss. ATR Archive

LEESBURG, GA – After suffering a 2-0 loss to Lee County (LC) last Monday in a game in which the Wildcats pulled off one of baseball’s rarest plays: a triple play, the Schley County High School Baseball Team (SCHS) was hoping to exact revenge on the Trojans at their home park in Leesburg on Thursday, March 24. With an inning and a half to go, the game was tied at 4-4, but in the bottom of the sixth, the Trojans exploded for seven runs on three hits and took advantage of a walk, two hit batsman and an error to secure an 11-4 victory over the Wildcats.

In the top of the sixth, SCHS fought back from three runs down to tie the game at 4-4 thanks to a two-run single by Trenton Stubbs and Sam Forehand scoring from third on a passed ball. Unfortunately for the Wildcats, a leadoff double by LC’s Will Henderson to start the bottom of the sixth opened the floodgates for the Trojans.

With one out and a runner on third, Cameron Paul drew a walk off SCHS pitcher Cameron Barnes. After Gavin Brinkley scored on a passed ball to give LC a 5-4 lead, Tripp Thomas drove in another run on an RBI single. Owen Greene then added to the Trojans’ lead when he singled to left field, scoring Paul from third.

Alex Newton was then hit by a pitch and Kyle Hudson took advantage by driving in another run on a sacrifice fly. While there were now two outs, that would not be the last of the runs scored by the Trojans. Luke Powell was then hit by a pitch and this loaded the bases for Henderson, who promptly hit a fly ball that was misplayed, allowing three runs to score. SCHS reliever Carson Westbrook was able to strike out Caden King to end the inning, but not before seven runs had crossed the plate for the Trojans.

In the innings preceding LC’s seven-run barrage, both teams were locking horns in a low-scoring affair. The Wildcats got on the board first in the top of the third when Westbrook drove in Ashton Raybon on an RBI single. The Trojans responded in the bottom of the third when Cameron Paul led off with a triple and Tripp Thomas reached on an error that allowed Paul to score the tying run. LC would later take a 4-1 lead in the bottom of the fifth on two RBI singles, one hit batsman and one error, but the Wildcats were able to fight back in the top of the sixth with three runs to tie the game before things fell apart for SCHS in the bottom half of the inning.

Jack Clark, Trenton Stubbs and Wesley Hughes each went 1 for 2 at the plate and Stubbs drove in two RBIs on a single in the top of the sixth. Westbrook and Owen Lamb were the only other Wildcats to earn hits in the contest, with Westbrook driving in an RBI.

SCHS used five pitchers in the contest. Wesley Hughes got the start on the mound and pitched two scoreless innings, giving up only three hits. Brody Smith came on in relief of Hughes, but struggled in his two innings of work, giving up four runs on three hits while posting one strikeout. Rylan Connor came on and pitched one scoreless inning before giving way to Cameron Barnes. Barnes gave up four runs on two hits and posted one walk.

Carson Westbrook was the final pitcher used by the Wildcats. He gave up three unearned runs on one hit and posted one strikeout.

Cameron Paul led the Trojans’ offense by going 3 for 3 with a triple, an RBI and three runs scored and Tripp Thomas went 2 for 4 with three RBIs and a run scored.

Dallas Nesbit pitched a little over five innings for LC. He gave up four runs on five hits, walked two and struck out four. Will Henderson came on in relief of Nesbit and pitched 1.2 scoreless innings with a walk and three strikeouts.

With the loss, the Wildcats fall to 9-4 overall on the season, but are still undefeated in Region 5A-Public competition at 7-0. They will try to rebound from Thursday’s loss when they host Manchester in a region contest on Friday, March 25 at 5:30 p.m.