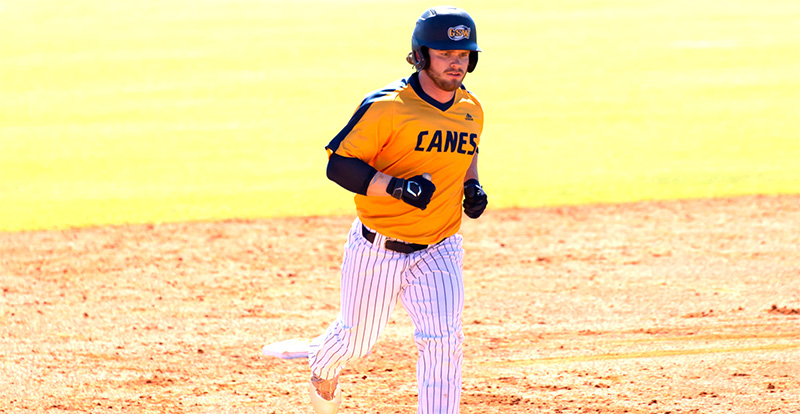 Georgia Southwestern infielder Reid Ragsdale had two doubles, belted a solo home run and drove in a total of three RBIs to help lead the Hurricanes to a 13-5 victory over Lander University on Sunday, March 27 to secure a series win for GSW over the Bearcats. Photo by GSW Athletics

In the first game of the three-game series against LU, the Hurricane pitching shut down the Bearcats’ lineup. Jared Donalson and Brandt Sundean combined for a one run performance, allowing just five hits over nine innings. The one run for the Bearcats was scored in the first inning and the Hurricanes would score four of their own throughout the rest of the game to get the 4-1 victory on Friday night.

GSW’s bats started to heat up in the second game, but the LU offense was able to out match them in a shootout on Saturday afternoon. Walks were an issue for GSW, as the Hurricanes allowed 11 runners on base on balls in the game. Lander scored multiple runs in the first five innings of the game to take a 12-run lead into the sixth, but the Hurricanes showed fight, scoring the next seven runs in the game to pull within five. A three-run home run in the sixth by Ryan Smith was not enough and the Hurricanes fell in the second game of the series 15-10.

In the third and final game of the series, the Hurricanes scored most of their runs in short bursts, scoring six runs in the second inning and four in the fifth inning. Gregory Wozniak led the way for the deciding game, hitting two home runs and adding six RBI to his total this season. Wozniak’s first home run, a two-run shot to center field, gave GSW a lead they would never relinquish after his second home run of the game broke it open for the Hurricanes. Reid Ragsdale drove in three RBIs of his own, adding two doubles and a solo home run in the second inning to open up the scoring for GSW. Matthew Mamatas hit three doubles in the contest and scored all three times to help the Hurricanes on their way in their 13-5 victory on Sunday afternoon.

The Hurricanes will head to Shorter University on Tuesday for a midweek game and the host seventh-ranked Columbus State at home for a three-game series.