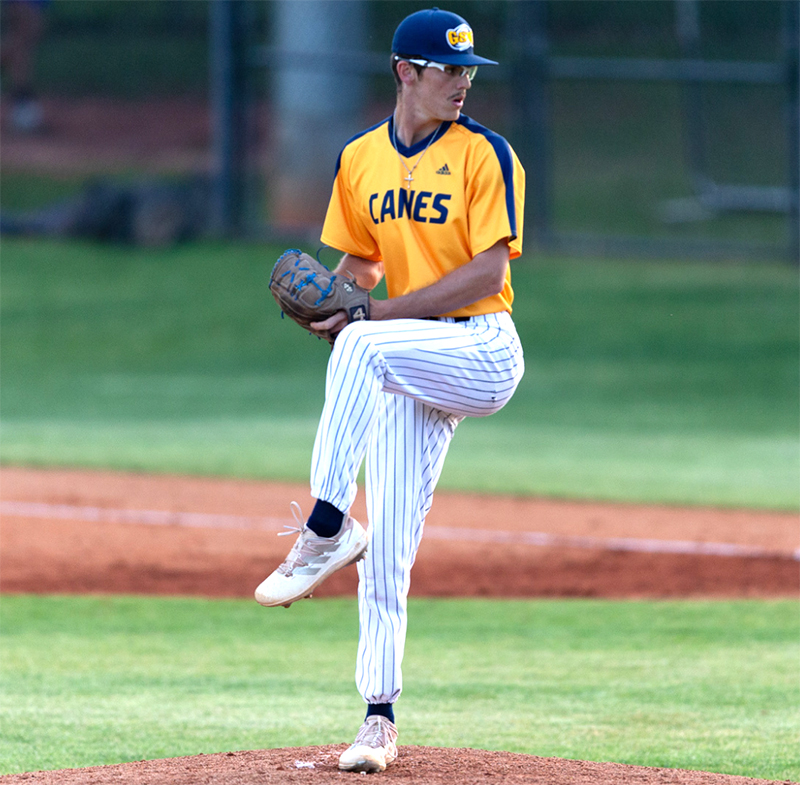 GSW sophomore pitcher Carson Plumadore is seen here pitching for the Hurricanes. In Game 3 against Columbus St., Plumadore gave up three runs on two hits, walked three and struck out one. Photo by GSW Athletics

AMERICUS – The Georgia Southwestern State University Baseball Team (GSW) could not pick up a win in their series against sixth-ranked Columbus State. The Hurricanes battled hard in the first two games of the series on Friday and Saturday, April 1-2, but came up just short in both contests by scores of 8-5 and 3-2. In the third game of the series on Sunday, April 3, the Cougars of Columbus State played lights out, putting the game out of reach early and taking Game 3 by the score of 12-2.

GSW was swept for the first time in conference play this season after winning their last two series of the season.

GSW and Columbus State were neck and neck for the majority of Friday’s matchup and were tied at 3-3 up until the seventh inning. Jared Donalson found his stride after a setback in the third inning that led to three runs for the Cougars. Donalson pitched three straight scoreless innings until a three-run home run in the seventh inning derailed his outing. The Cougars added one more in the inning putting the Hurricanes down 7-3 heading into the ninth. Columbus State added one more in the ninth and the Hurricanes plated two at the end to make it a three-run ballgame. Columbus State would close the door on the Hurricanes getting the 8-5 victory in the first game of the series.

The closest of the three games was on Saturday with GSW taking a 2-0 lead in the second inning. They would hold that lead until a solo shot tied it up in the seventh inning. The score would stay knotted up at two until Columbus State hit its second solo home run in the top of the ninth taking their first lead of the game over GSW. The Hurricanes couldn’t answer in the bottom half giving the Columbus State the series win. Nick McCollum pitched well in the game going 7 2/3 innings allowing just one run against the top-ranked offense in the Peach Belt.

The third game of the series was all Columbus State with the Cougar bats coming alive in the fourth and fifth inning plating seven runs combined in the two innings. The Cougars ended the game plating two runs in the top of the ninth and the Hurricanes fell in the final game 12-2.

The Hurricanes will try and regroup on the road with a midweek contest against West Georgia before heading to Georgia College for a Peach Belt Conference series against the Bobcats.