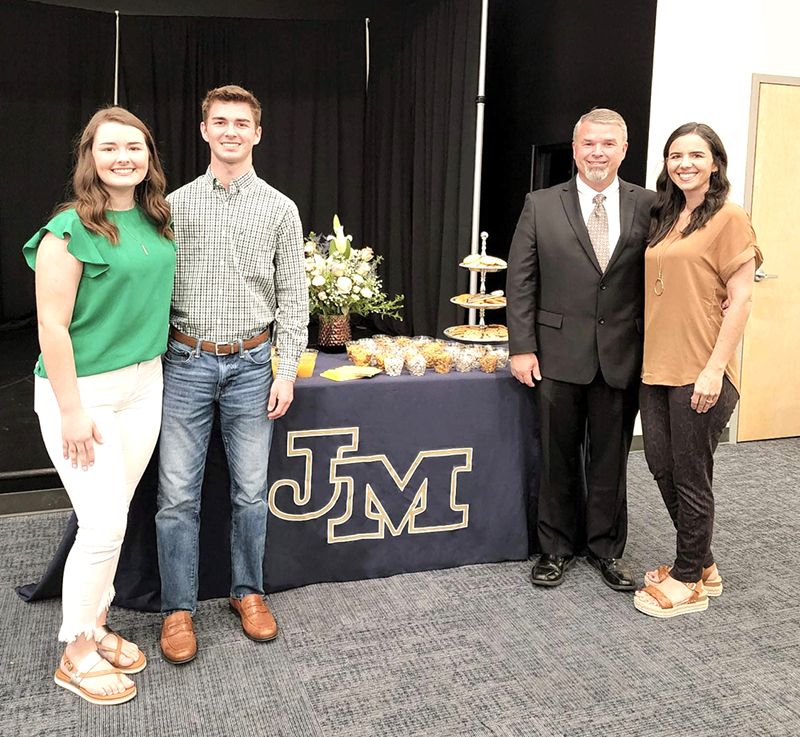 Southland Academy Assistant Headmaster and Athletic Director Clint Humphrey will be leaving Southland to take the position of Head of School at his alma mater, John Milledge Academy. Humphrey is standing on the right with his wife Allison. On the left are his daughter Taylor, who will is a rising junior, and his son Tanner, who is a rising senior. Photo by JMA

AMERICUS – After 11 years of service as Southland Academy’s Athletic Director and assistant headmaster, Clint Humphrey is leaving Southland to take over the Head of School position at his alma mater, John Milledge Academy (JMA) in his hometown of Milledgeville, GA.

“Southland Academy is a great school. Our family has been blessed in so many ways by being a part of the Raider community,” Humphrey told the Americus Times-Recorder.  “I’m so thankful for the teachers, coaches, and friends that have invested in the lives and education of my children. We will miss everyone immensely.”

During his 11-year tenure at Southland, in addition to his roles as Assistant Headmaster and Athletic Director, Humphrey taught eighth grade Bible and coached middle school football for eight years.

In a statement posted on the JMA website, the school’s Board of Trustees expressed its excitement and gratitude for having Humphrey as their new Head of School. The statement reads:

“We are pleased to announce that the Board of Trustees has appointed Clint Humphrey to become our next Head of School. Clint has a strong background as a teacher, administrator, and leader, with extensive history in independent schools. This wealth of experience will help drive John Milledge into our next phase of growth.

Clint is a Milledgeville native and graduated as a John Milledge Trojan in 1989. He has served in administrative roles within GISA schools for 15 years. He and his wife Alison have two children. Their son Tanner is a rising senior and their daughter Taylor is a rising junior. Their entire family is ready and excited to wear blue and gold! Please join us in welcoming him into the JMA family once again!”

Southland Academy Headmaster Dr. Larry Collins expressed excitement that Humphrey is getting the opportunity to be the new Headmaster at his alma mater.

“Southland Academy is excited for Clint Humphrey to have the opportunity to return to his alma mater, John Milledge Academy, as its headmaster,” Dr. Collins said. “Mr. Humphrey has served Southland for the last eleven years as the athletic director and assistant headmaster. During his time at Southland, the athletic department has experienced state and region championships.  Mr. Humphrey’s personal commitment to his Christian faith and his family has been a tremendous example to our school community.  He has been faithful to Southland and he and his family have become an integral part of our school community.  We wish him the very best in his work at John Milledge Academy,” Dr. Collins continued.