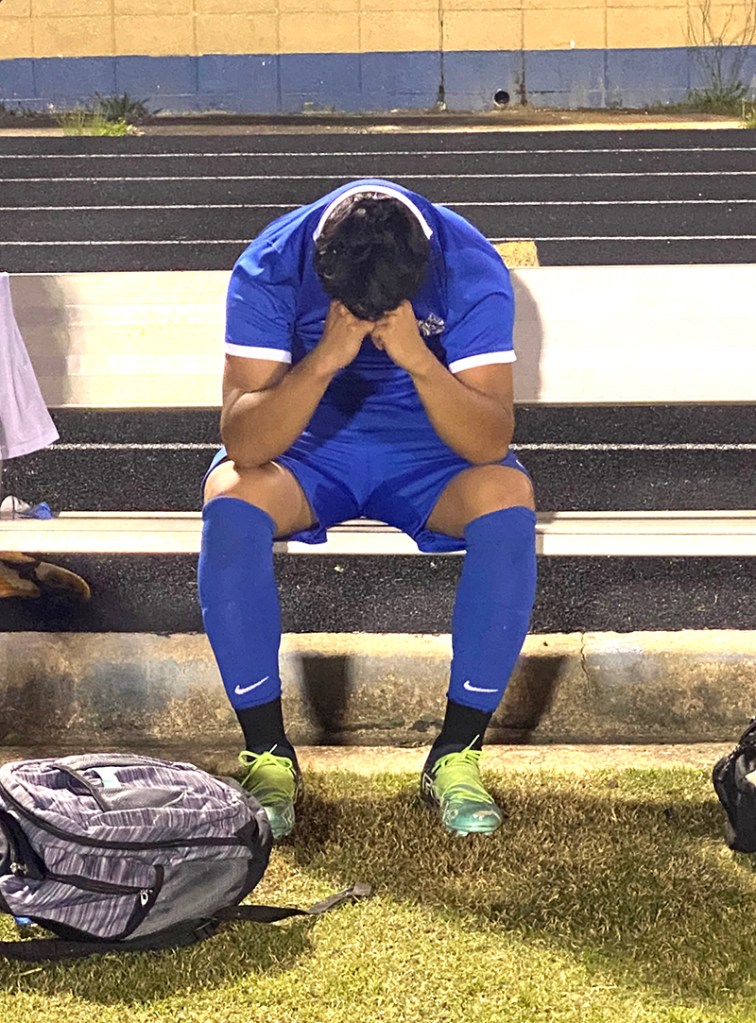 Sumter County senior forward Kevin Abarca is dejected and heartbroken after the Panthers lost to Peach County 4-3 on a goal that was scored with 21 seconds left in the second overtime. Abarca scored the Panthers’ first goal of the match three minutes into the second half. Photo by Ken Gustafson

AMERICUS – Eighty minutes was not enough time to decide a winner in this epoch high school boys’ soccer match between Sumter County (SCH) and Peach County (PCH). The winner would go to the GHSA Class AAA State Playoffs as the #4 seed out of Region 2-AAA. For the loser, their season would be over. At the end of regulation, the score was tied at 2-2 and two 10-minute overtime periods would be needed to decide a winner. Two minutes into the first overtime, SCH senior forward Jesus “Chuchies” Rodriguez scored to give the Panthers a 3-2 lead, but the Trojans tied the match when PCH forward Kaleb Wilds scored the first of his two overtime goals with 3:07 to go in the first overtime. Then with just 21 seconds left before the end of the second overtime, Wilds brought heartbreak to the Panthers and their fans when he dribbled through the SCHS defense and scored, handing the Panthers a crushing 4-3 defeat and ending their season.

“It’s upsetting. You hate to have the last game end in an overtime by one goal,” SCHS Head Coach Michael Pepito said. “It’s just one of those things, but they played their hearts out. You can’t ask for much. If you give 110 percent or 150 percent, there are no losers. You just got beat by a better team, you know, and that’s the way we kind of look at it. Do we have things to work on? Yes. We’ve got on offseason that’s coming up. I’ve got young kids coming up and they’re all eager to go, so we’ve got to just keep pushing forward and keep pushing the program forward.” 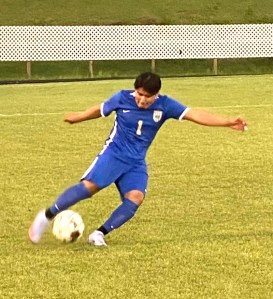 Sumter County senior Roberto Gonzalez is seen here competing in his final game as a Panther against Peach County.
Photo by Ken Gustafson

SCH finishes the season at 6-5 overall and 2-5 in Region 2-AAA competition. The Trojans (8-8-1 overall, 4-3 Region 2-AAA) came into this match in fourth place in the region standings, but had the Panthers won this match, both teams would have been tied at 3-4, with SCH winning the tiebreaker and advancing to the state playoffs as the fourth seed.

The Trojans dominated the first few minutes of the first half. About 10 minutes into the match, Oscar Sandoval scored the first of his two goals and added his second goal a few minutes later to give PCH a 2-0 lead at halftime. 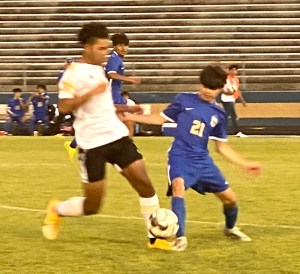 However, the Panthers began their comeback in the second half. In the 43rd minute of play, Abarca took the ball down the right flank and took a shot that went past the PCH goalkeeper and into the net to put the Panthers on the board. Almost five minutes later, Rodriguez took a shot on goal that slipped pas the goalkeeper’s hands and into the net, tying the match at 2-2.

With about 30 seconds left in regulation, the Trojans nearly got the match winner as a shot was taken on goal, but SCH junior goalkeeper Ary Flores was able to knock the ball just wide of the net and over the end line for a corner kick. With about seven seconds left, the Trojans took the corner kick, but the Panthers were able to hold their ground and the match would go into overtime tied at 2-2.

With 3:07 left in the first overtime, Rodriguez struck again for his second goal of the match and the Panthers were 13 minutes away from going to the state playoffs. 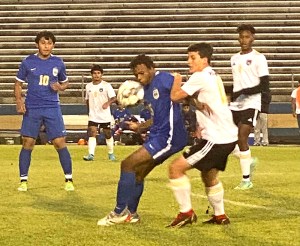 However, with eight minutes left in the second 10-minute overtime period, Kaleb Wilds gave the Trojans the equalizer and would later score the match winner with just 21 seconds left to give PCH the 4-3 double overtime victory and hand the Panthers an excruciating loss on Senior Night. 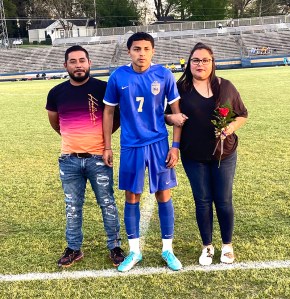 Sumter County senior forward Jesus Rodriguez (center) is honored on Senior Night before the Panthers’ match against Peach County. To the left is his father, Gilbert Morales and to the right is his mother, Sandra Rodriguez.
Photo by Ken Gustafson

In spite of the loss, it is safe to say that the Sumter County boys’ soccer program has made tremendous strides over the past few years. This year, the Panthers finished with a winning record (6-5) and will have 11 returners from this year’s squad back next year. As Coach Pepito stated, younger talented players will be coming into the program as well. All of this should make for another exciting and successful season of Sumter County Panthers Soccer in 2023.