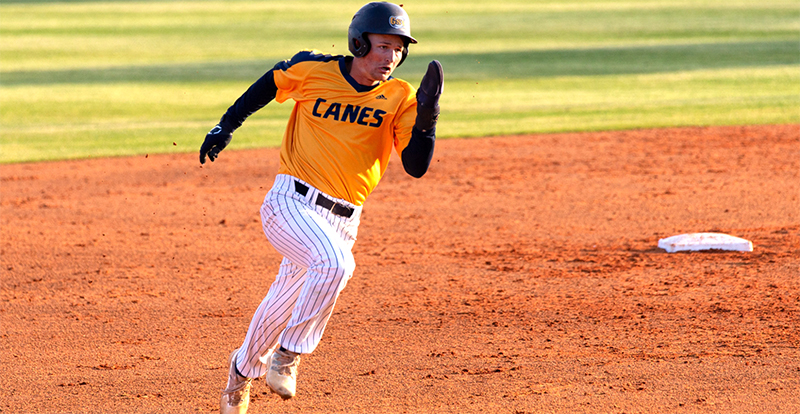 GSW infielder Reid Ragsdale is seen here running around the bases. Ragsdale went 1 for 4 with a single in the Hurricanes’ 3-1 victory over Georgia College in Game 1 of the three-game series. Photo by GSW Athletics

MILLEDGEVILLE, GA – The Georgia Southwestern State University Baseball Team won its third road Peach Belt Conference series of the season after sweeping the Saturday afternoon doubleheader with the Bobcats 3-1 and 13-10 and losing Game 3 on Sunday by the score of 6-4. The three road series wins are a part of a solid run for the Hurricanes as they have won four of their last five Peach Belt Conference series. GSW’s only series loss in that stretch was to fifth-ranked Columbus State.

Pitching dominated the first game of the series, with Jared Donalson, the league’s leader in strikeouts, going seven complete innings and only allowing one run on three hits and adding six strikeouts to his total. Brandt Sundean came on in relief and got the six-out save for the Hurricanes, striking out four of the eight batters faced in the game. Georgia College’s pitching battled in the first game to match Donalson, but Greg Wozniak took advantage of a key error in the first inning and launched a two-run shot to center field to take a two-run lead. The score would stay the same for both teams until the fifth when Anthony Angelino drove in Tyler Skelton to increase the lead to three. The Bobcats would try to answer, scoring on a sacrifice fly in the seventh but Brandt Sundean shut the door on the Bobcat’s chances and closed out the game on Friday night.

On Saturday, April 9, in the first game of the doubleheader, the Hurricanes showed they can win in multiple different ways, securing the series win in a shootout over Georgia College. The Hurricanes jumped out to a massive seven-run lead and looked to be cruising. The Bobcats would not go away however scoring three or more runs in the next three innings. Georgia College was able to tie it back up in the bottom of the seventh but the Hurricanes scored four in the top half of the eighth to take an 11-7 lead. In the bottom of the eighth Georgia College cut that lead to just one with three runs of their own, the Hurricanes added two insurance runs in the top half of the ninth, and Brandt Sundean got his second save of the weekend getting five outs for his fifth save of the season. Reid Ragsdale had himself a day at the plate in the second game, the Americus, Ga. native hit two home runs in the game, getting five RBI with a three-run shot in the third and a two-run home run to right field in the eighth. Gregory Wozniak added a three-run double to left-center to his home run on Friday to help lift the Hurricanes over Georgia College and win the series.

The final game of the three-game series was a seven-inning game for the second of two games on Saturday afternoon. The usual suspects from the two previous games carried the Hurricanes offensively; Reid Ragsdale, Anthony Angelino, and Gregory Wozniak were responsible for most of the production in the final game and the series for GSW. Pitching struggled in the third game and the bats didn’t wake up until late in the shortened game. The Hurricanes scored three runs total in the sixth and seventh inning but ran out of time falling in the third and final game 6-4 after battling back to give GSW a chance late.

The Hurricanes (14-21, 10-8 PBC) will face Albany State on Tuesday for a midweek contest before heading to Flagler College to try and pick up their fourth straight road series victory this season.