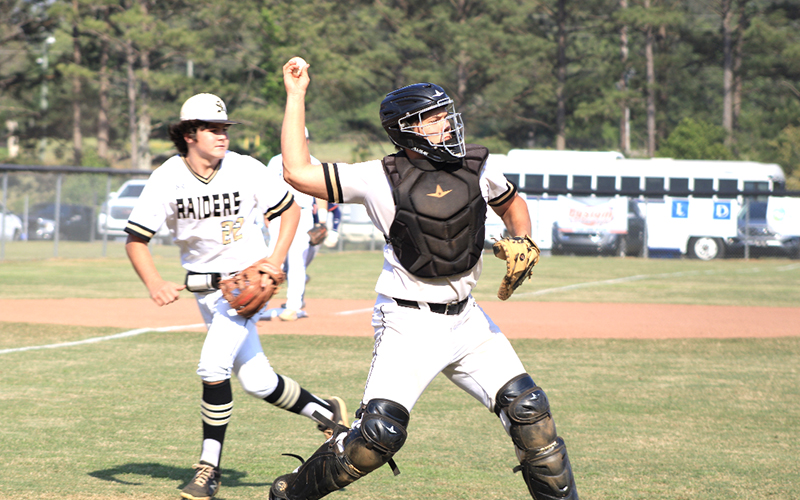 Southland Academy catcher Will Godwin is seen here throwing the ball to either first or second base. Godwin went 2 for 3 with a triple and an RBI to help lead the Raiders to victory over Valwood. Photo by Kayla Hudgins

AMERICUS – The game was tied at 3-3 going into the bottom of the sixth, but the Southland Academy Raiders responded with four runs on four hits to secure a 6-3 victory over the Valwood Valiants on Tuesday afternoon, April 12 at Southland Academy.

SAR trailed 3-2 in the bottom of the sixth, but Perry Usher led off the inning with a single and Will Godwin belted an RBI triple to tie the game at 3-3. VAL pitcher Jack Drew struck out the next two batters he faced, but walked Greer Hagerson, who later stole second base. Fisher Britt then drove in the go-ahead run on an RBI single and Caleb Law drove in a run on an RBI double. 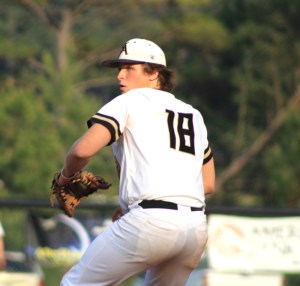 Southland Academy pitcher Chase Ledger shut down the Valwood offense in the top of the seventh after the Raiders took a 6-3 lead in the bottom of the sixth. In one scoreless seventh inning, Ledger walked one batter and struck out two.
Photo by Kayla Hudgins

In the top of the seventh inning, SAR reliever Chase Ledge walked the VAL leadoff batter Tony Dinkins, but regrouped to retire the next three batters she faced to secure the Raiders’ victory. 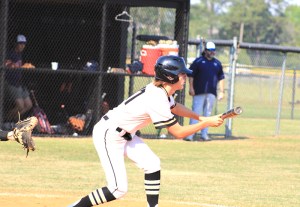 Southland Academy right fielder Fisher Britt squares to bunt. Britt went 1 for 2 with an RBI and a run scored in SAR’s win over the Valiants.
Photo by Kayla Hudgins

Perry Usher got the start on the hill for SAR. In six innings of work, he gave up three runs on three hits and struck out three. Ledger came on in relief of Usher and in one inning of work, he pitched scoreless baseball with two strikeouts and a walk.

The Raiders scored six runs on nine hits, but struggled defensively as they committed five errors.

SAR will face these same Valiants again in Hahira, GA on Friday, April 15 for a doubleheader. The first pitch for Game 1 is scheduled for 4 p.m., followed by Game 2 at 6:30m p.m.