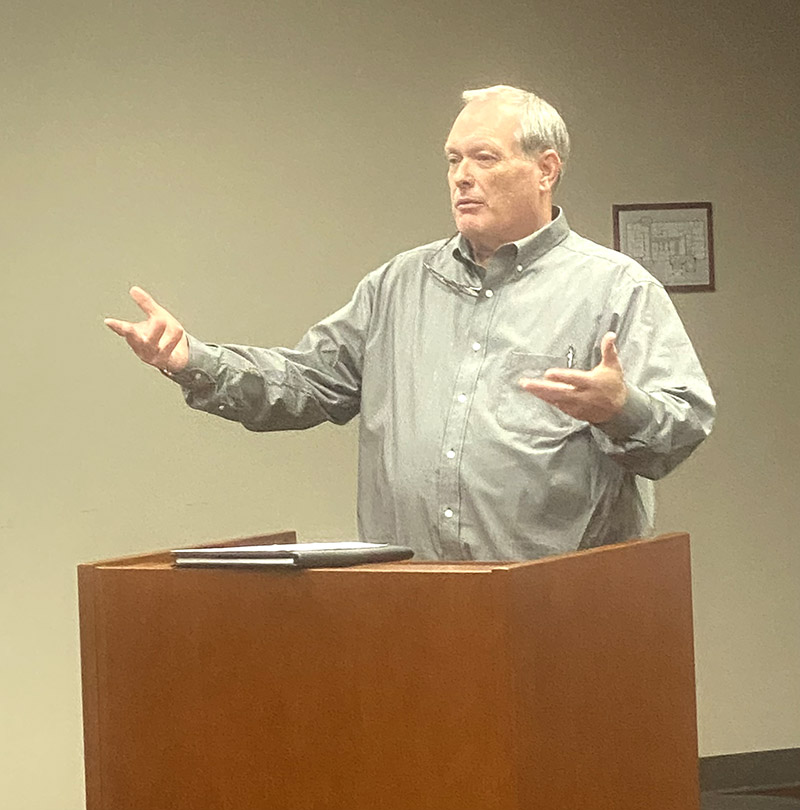 Doug Goodin, Chief Assistant Appraiser for the Sumter County Tax Assessor’s Office, makes his case before the Sumter County Board of Commissioners that fire fees should be collected through the millage rate. Photo by Ken Gustafson

AMERICUS – At its monthly work session on Tuesday, April 12, the Sumter County Board of Commissioners (BOC) heard from Doug Goodin, the Chief Assistant Appraiser for the Sumter County Tax Assessor’s Office. Goodin was there to discuss the collection of fire fees throughout the county and how that would best be done.

This meeting was the first meeting for newly elected Commissioner Jim Reid.

Goodin told the BOC that there is no equitable way to do a fire fee and that someone is getting the raw end of the deal no matter how it is done. Goodin went on to give an example of a lady who’s total tax bill was less than $300 with all the exemptions that they offer and that her fees were more than her tax bill.

“All the Tax Assessor’s Office can do is present you with a tax digest for you to set the millage rate and the budget,” Goodin told the BOC. “We’ve had these discussions and if there are any changes to the fire fees other then the current situation that’s in our system, we’re going to have to contract with somebody to come in and do it.”

Goodin went on to say that, in his opinion, the only way to fairly collect fire fees is through the millage rate for people in the county. “Right now, no matter what you do with the fees, utility companies, we can’t put them on personal property accounts,” Goodin told the BOC. “We can’t put the fees on anything that you report for personal property. Your inventory is your business. We cannot put fees on there. That’s not in the statute. It’s not going to work in our system. We can’t collect on that. That’s the whole group that if you added in the millage rate, they would pay some of the fire fees to operate the fire funds,” Goodin continued.

He went on to say that his reasoning for coming before the BOC to discuss this matter was to convince the BOC that the best way for the county to collect fire fees is through the millage rate. “The fee system just doesn’t work. It needs to be in the millage rate,” Goodin said. “Right now, they come into our office wanting to appeal the fire fees, well we cant, so they go to Chief Harmon’s office. They go to garbage. They go to the Board of Commissioners. Well, the garbage will probably have to stay because I don’t think there’s any way around that, but as far as the fire fees, I think they need to be part of the millage rate,” Goodin continued. He added that there is nothing that can be done this year to rectify the situation, but that it can be fixed in the future by using the millage rate to collect fire fees in the county.

Board Chairman Mark Waddell stated that while he agreed with Goodin that nothing could be done about the situation this year, he added that one person who owns a mobile home and another person who owns a $1 million-dollar house are both paying the same amount in fire fees. “We can still look at it and discuss and see what other options might be out there,” Waddell told Goodin.

Commissioner Jim Reid, who was participating in his first BOC work session, said that he didn’t understand why Goodin viewed the current system as unfair. Goodin replied that it is unfair because under the current system, a $300,000.00 parcel of land is getting a $75 fire fee. Commissioner Reid replied that the citizens of Sumter County are paying to have that equipment on stand by and ready to respond regardless of the value of the property. “Really what you’re paying for is to have them to show up. The dispatcher on the other end doesn’t ask the value of the property,” Reid said. “The person with the $25,000.00 gets the same response as the person with the $1 million-dollar house.”

Reid further explained that if he owned a repair business, the service fee for showing up would be the same regardless of what the cost would be for the actual repair that needed to be done. “You think it’s unfair for the person that has a $100,000.00 house to pay the same thing as the person with the $1 million-dollar house, but yet they both get the same service, so if you get the same service, shouldn’t you pay the same price,” Reid said. Reid added that he is willing to pay the fire fees on different parcels, but added that to him, it looks like a bargain considering the services that the fire department provides. “I’ve always considered it a bargain,” Reid said. “I’ve never really considered them (the county fire department) a burden. They’re a bargain for the response that I’ve seen. Thank God I’ve never needed them, but they always respond,” Reid continued.

Sumter County Fire Chief Jerry Harmon stated that when they changed the fire fees a year ago, the commercial rates didn’t change and therefore, the “mom and pop” service station is paying the same fee as a big manufacturing plant. “Now, we are talking a lot more resources,” Harmon said. “We‘re going to have to rely on the City of Americus with a ladder truck.” Chief Harmon went on to say that there are so many storage mills popping up with people living in them and they’re not paying fire fees. “We’re trying to pick these up and they’re adding a $300,000.00 barn to the property with living quarters,” Harmon said. “We’re trying to catch it as we go, but technically, they call it a barn. So what do we do with them? Those are some of the things we’re missing out on.”

Goodin replied that if someone’s camper catches fire, being that the camper isn’t paying any fee, the fire department would still send the same resources out there. Chief Harmon replied that he, County Administrator Rayetta Volley and Sumter County Tax Commissioner Wilkie Smith are all trying to work something out because a lot of people from Florida are coming here with campers and there is no current decal or tag. He added that at a certain RV park, he estimated that probably half of the campers didn’t have a tag or a decal. “Nobody’s getting taxes on it and the county is missing out,” Harmon said. “They’re permanently stored there. Therefore, they need a Sumter County decal so that Sumter County can get what’s due to Sumter County.”

Goodin responded that his staff made a sweep through the county and found several sites where hunters had brought their campers and stored them there, including an RV park in Plains. “They had the drive out tags from 2017. They had to come back in and pay the back taxes through 2017 because they were permanently living there. A lady had planters outside and the whole nine yards, but they weren’t paying any taxes until we discovered them,” Goodin said.

Rayetta Volley stated that she and the BOC are working to try and come up with a fire fee ordinance and they need to know what they are going to put in the ordinance. “So everything that they’re talking about as far as the campers, the trailers, the barns, all of that will be included in the ordinance as to how we’re going to charge it,” Volley said. “But our issue of what we were trying to see was that the Commissioners want to do the millage rate, or continue with the fee and then we can move forward from there.”

Board Chairman Mark Waddell asked Volley if this subject is on the agenda for the BOC’s retreat in May. Volley replied that it wasn’t because when the BOC discussed it in March, it agreed to keep the current fee. “The overall picture is we want a fire fee ordinance, which will spell out everything we’re talking about here tonight,” Volley said. “It would be included in that ordinance as to what is charged based on size or whatever the board decides,” Volley continued. Volley then asked the BOC if it wanted to see the numbers based off if the millage rate is used compared to the current fee. Board Chairman Mark Waddell replied that that is exactly what the BOC needs to see. “Are we going to be able to be where we are now with what our fees are, or when we go down this road, oops! We’re making $500,000.00 less,” Waddell said.

Goodin replied that when his office first started doing the fire fees, they came up with a parcel fee and they have combined more parcels in Sumter County than anyone would believe. ”You’re going to see people tearing down structures. Chief Harmon is going to be writing permits for demolition out the ying yang when we go to adding fees on my little storage building out in my back yard,” Goodin said.

No approval or decision was made by the BOC concerning fire fees, but the discussion is on going and, as was mentioned earlier, a fire fee ordinance is in the process of being constructed.

There were approvals made by the BOC at its work session concerning other matters. They are as follows: