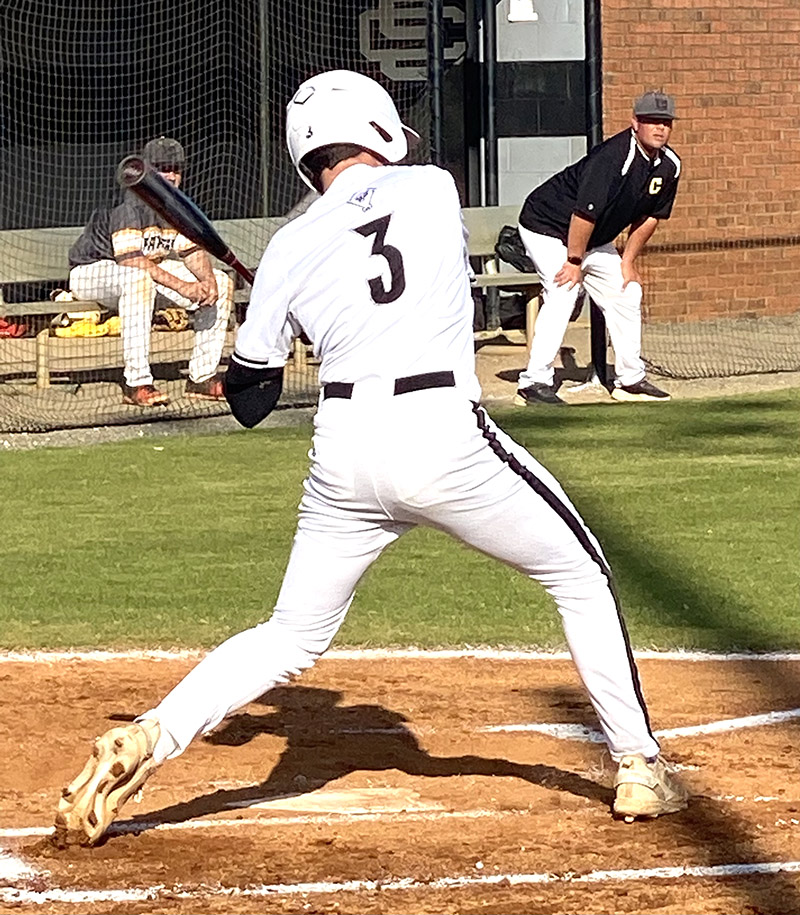 Schley County outfielder Trypp Lumpkin went 3 for 4 at the plate with two home runs and five RBIs in the Wildcats’ 10-9 victory over Chattahoochee County. Photo by Ken Gustafson

AMERICUS – During the first three innings of play against Chattahoochee County (Chatco), the bats of the Schley County Wildcats (SCHS) were silent and SCHS trailed the Panthers 2-0. However, things changed in the bottom of the fourth as SCHS senior Trypp Lumpkin drilled the first of his two home runs in the game as part of an eight run explosion by the Wildcats. That eight run fourth inning set the tone the rest of the way and though Chatco made a bid for a comeback in the seventh, the Wildcats were able to hold on to a 10-9 victory over the Panthers in their final home game of the regular season.

SCHS Head Coach Chuck Cheek was not at the game due to the fact that his daughter Madison, a nursing student, was being honored with special recognition. Assistant Coach William Rooks took over the coaching duties in this game.

“It’s obviously frustrating when you give up nine runs, but I’m proud of the way we battled late in the game,” Rooks said. “I’m proud of the way Trypp is hitting the ball. He scuffled a little bit earlier in the year and he’s really got it going, which is going to be big for us going forward in the playoffs.” 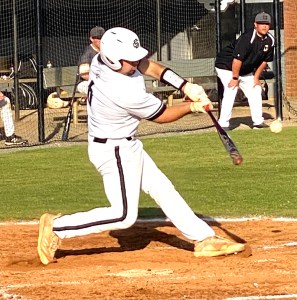 Schley County first baseman Jack Clark went 1 for 3 at the plate with an RBI and two runs scored in the Wildcats’ victory over Chattahoochee County.
Photo by Ken Gustafson

Before the first pitch was thrown in this game, the Wildcats (17-8, 12-0) had already wrapped up the Region 5A-Public championship and a #1 seed in the first round of the GHSA Class A-Public State Playoffs. The Panthers, on the other hand, were fighting for their postseason lives. A win over the Wildcats and they’re in the playoffs, but a loss would result in their season coming to an end.

“They (Chatco) had a lot to play for and we’ve already clinched the region championship,” Rooks said. “I challenged the guys before the game, ‘Don’t let that affect our level of play.’ And so I’m hoping that going forward, we will learn that we can’t sit on leads and we will learn how to finish ball games.” 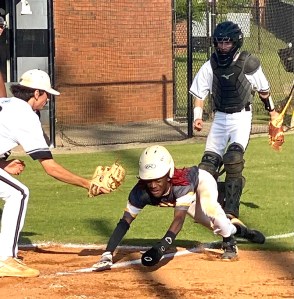 Lumpkin led the Wildcats’ offense by going 3 for 4 at the plate with two home runs, five RBIs and three runs scored. Jack Clark went 1 for 3 with an RBI and two runs scored and Carson Westbrook, Brody Fuller, Trenton Stubbs and Cameron Barnes each had a hit in the contest. Stubbs also drove in a run for the Wildcats.

The Panthers got on the board first in the top of the third inning with two runs on two hits and took advantage of an error, a hit batsman and a passed ball. 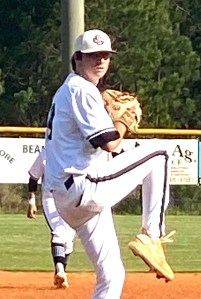 Schley County pitcher Owen Lamb struck out eight batters over five innings of work to help lead the Wildcats to a 10-9 victory over Chattahoochee County.
Photo by Ken Gustafson

However, the Wildcats exploded with eight runs on six hits, including a three run homer by Lumpkin, the first of his two homers in the game.

The Panthers fought back in the top of the sixth with three runs on three hits, including an RBI double by Jacob Walker. The Wildcats had a six run lead, but now found themselves only up by three at 8-5.

However, with two outs in the bottom of the sixth, Clark was able to draw a walk and Lumpkin followed with his second home run of the game to give the Wildcats a 10-5 lead.
However, the Panthers were fighting for their playoff lives and they were going to make one last stand in the top of the seventh.

Ryan Benavides led off the top of the seventh by drawing a walk from SCHS reliever Rylan Conner. Jakeem Harris then reached on an error and Tayshaun Ryals-Wilson drove in Benavides on an RBI single. 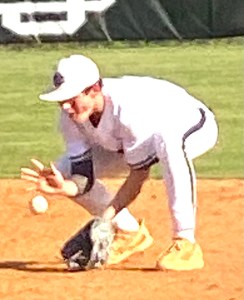 Kason Binn then reached on another SCHS error that allowed another run to score and Ryals-Wilson would later score on a passed ball to bring the Panthers to within two at 10-8. Caleb Floyd then drove in another run on a fielder’s choice, but SCHS reliever Ashton Raybon, who came on in relief of Conner, struck out Zane Toms to end the game.

Owen Lamb got the start on the mound for the Wildcats. In five innings of work, Lamb gave up five runs on five hits, walked one and struck out eight Chatco batters.

The Wildcats will travel to Columbus on Friday, April 22 to take on Brookstone in their final game of the regular season before the start of the state playoffs. First pitch is scheduled for 4:30 p.m.