Southland splits with Valwood in first round of state playoffs 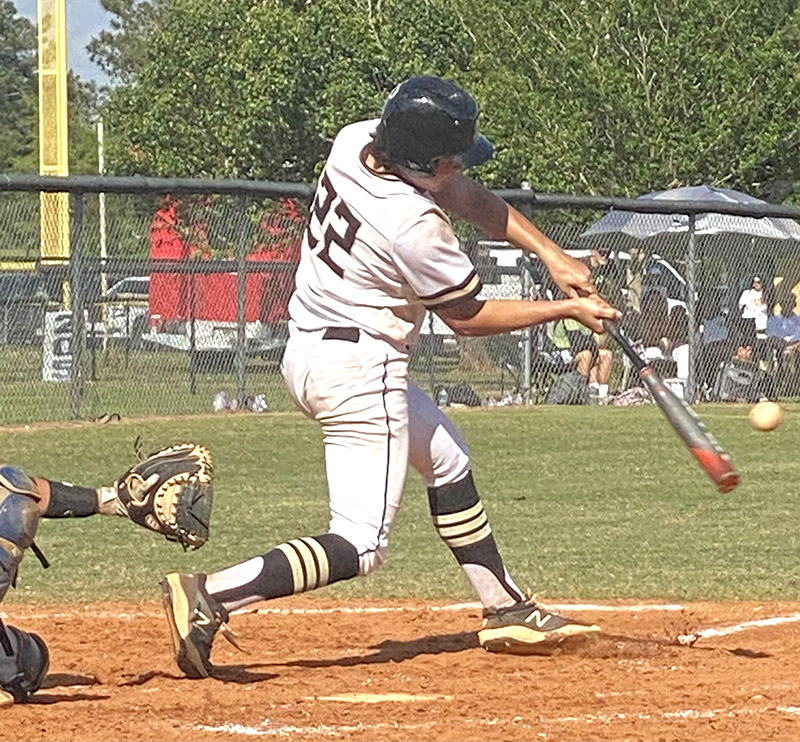 Southland Academy Game 2 starting pitcher Perry Usher went 1 for 4 at the plate in Game 2 against Valwood. Photo by Ken Gustafson

AMERICUS – The Southland Academy Baseball Team (SAR) took Game 1 by the score of 5-0 against Valwood, but the Valiants fought back in Game 2, edging out the Raiders 2-1 on a walk off RBI single by Cole Belue in the bottom of the eighth inning to tie the series at one game a piece in the first round of the GISA Class AAA State Playoffs on Monday, April 25 at Southland Academy.

This means that the third and deciding game of the series will be played on Tuesday, April 26 at Southland Academy at 4:30 p.m.

Southland Academy designated hitter Luke Exley scores one of the Raiders’ five runs in their 5-0 victory over Valwood in Game 1.
Photo by Ken Gustafson

Both SAR starting pitchers Chase Ledger and Perry Usher turned in outstanding performances over the first two games. Ledger pitched seven scoreless innings in Game 1 and struck out nine Valwood batters while walking two to get the win. Usher was the starter in Game 2 and only gave up two runs on nine hits while striking out three and walking six, but the SAR offense could not get going against the Valiants’ starting pitcher Emory Hogan, who gave up one run on seven hits and struck out eight batters while walking one.

“Chase and Perry both pitched outstanding today,” SAR Head Coach John Brady said. “That kid (Hogan) has given us trouble a couple of times this year. He’s a good pitcher. He mixes his speeds a lot. He’s just a good pitcher and unfortunately, we weren’t able to quite have enough to beat him in the second game, but hats off to Valwood. They played a good game and we’re going to come back tomorrow (Tuesday, April 26) and see if we can move on.” 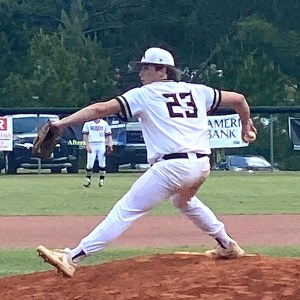 In addition to his dominance on the mound, Ledger also had a hit in Game 1 as he went 1 for 3 with a single.

In Game 1, the Raiders jumped out to a 2-0 lead in the bottom of the first when Law drove in his two RBIs on a single into left field. SAR then added another run in the second when Henry Johnson doubled and later scored and the Raiders added two more runs in the fourth on an RBI double by Luke Exley and an RBI single by Johnson. 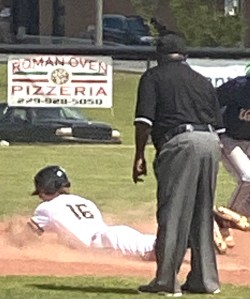 Game 2 was scoreless through five innings of play before SAR, the visiting team, scored a run in the top of the sixth on an RBI single by Will Godwin. However, the Valiants equalized in the bottom of the sixth. With the bases loaded and nobody out, Jack Drew hit a sacrifice fly to centerfield, scoring Dalton Smith from third and tying the game at 1-1. A.J. Thompson then singled to centerfield to reload the bases for the VAliants, giving Emory Hogan the opportunity to give Valwood the lead with just one out. However, Charles Hamsley, the Valiants’ base runner at third, got caught in a run down between third and home and was tagged out by SAR catcher Will Godwin. Hogan singled to left field to keep the inning going, but Usher was able to strike out Cole Belue to end the threat. 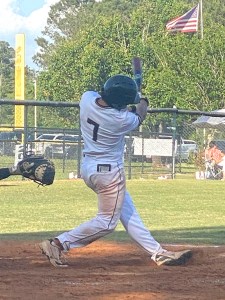 Southland Academy right fielder Scout Luvin singled in his only at bat in Game 2 in the top of the seventh inning.
Photo by Ken Gustafson

Neither team could break through with the winning run in the seventh inning and the game would have to be decided in extra innings. In the top of the eighth, Ledger reached on an error to lead things off, but Hogan was able to retire the next three batters he saw to end SAR’s threat, giving the Valiants the opportunity to win the game in the bottom half of the inning as the home team in Game 2.

Usher was able to strike out Jack Drew for the first out, but A.J. Thompson singled and advanced to second base on an error, putting the winning run in scoring position. Hogan then drew a walk and Thompson was able to advance to third on a passed ball. This set the stage for Belue, who was able to deliver with a walk off RBI single that gave the Valiants a 2-1 victory, thus tying the series at 1-1. 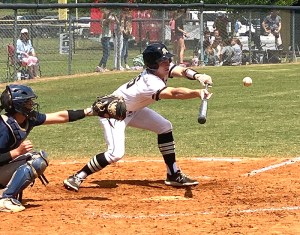 Caleb Law led the Raiders’ offense in Game 2 by gong 2 for 4 at the plate and Will Godwin went 1 for 4 with an RBI. Johnson, Ledger, Usher and Scout Luvin each had a hit in this game and Ledger scored the Raiders’ only run on Godwin’s RBI single in the top of the sixth inning. 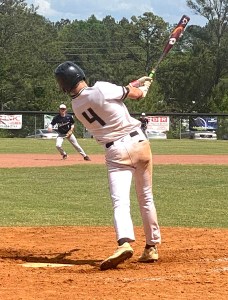 Southland Academy third baseman Henry Johnson went 2 for 3 with an RBI and two runs scored in the Raiders’ 5-0 victory over Valwood in Game 1 of the first round series in the GISA State Playoffs.
Photo by Ken Gustafson

The winner-take-all Game 3 of this best-of-three-games series between SAR (11-11) and Valwood is scheduled for Tuesday afternoon at 4:30 p.m. at Southland Academy.