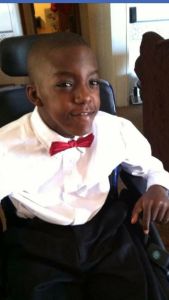 Jayden Johnson would have been 19 years old on April 10, 2022. The third and youngest son of Fanesia and David Johnson, he developed an enlarged heart soon after birth. At 5 months old, he was diagnosed with Pompe disease, a rare genetic disorder characterized by the abnormal buildup of a complex sugar molecule called glycogen inside cells. This buildup impairs the workings of different organs and tissues, especially the heart and other kinds of muscle. With a prognosis that Jayden would probably die before his 1st birthday, his pediatrician located a clinical trial at Duke University. Since he was so fragile, Fanesia had to move with him to North Carolina for the trial.

After 6 months of treatment his heart size had decreased by half, he no longer required a feeding tube, and he was sitting up and moving around on his own.  He was well enough to move home and his family began making the roundtrip drive from Americus to Atlanta every two weeks to continue the clinical trial at Emory. A little after his first birthday, Jayden was walking on his own. His heart size was still decreasing, and looking at him, you would never have guessed he had Infantile Pompe disease. The clinical trial proceeded and the bi-weekly trips to Emory continued so he could receive his 8-hour infusion. In April of 2006, the FDA approved Myozyme for all Pompe patients.  Although Jayden’s muscles were weaker than his friends, he could run and play and do everything you would expect a preschooler to be doing.

In June of 2006, Jayden’s dose of Myozyme was lowered and although stable, he still saw numerous doctors and specialists on a regular basis. In March 2010, he was hospitalized for the first time since his diagnosis. He subsequently went into respiratory failure, was placed on a ventilator and air-lifted to Children’s Hospital of Atlanta.  He was treated, successfully taken off the ventilator, and came home a week later to begin his infusion treatments at Phoebe Sumter Medical Center.

Like most children in the United States with Pompe disease, Jayden transitioned to the ADVANCE clinical research study at Emory in April of 2012 and started enzyme replacement therapy (ERT) with the 4000L version of Myozyme. This required his family to now make weekly trips to Atlanta.

By August of 2013, it was clear Jayden was continuing to lose muscle strength. Sadly, Jayden passed away in the early morning of March 14, 2014, likely the result of a sudden respiratory or cardiac event. Fanesia reflects, “Our little boy touched so many lives with his courageous, hopeful, and happy spirit. He always had a grin on his face.”

After his death, David and Fanesia realized that their extreme financial, emotional, and spiritual challenges had kept them from seeing the hidden treasures along Jayden’s journey. These hidden treasures were neighbors with medical skills stopping by to check on Jayden, teachers who would call if he exhibited signs of exhaustion, and physicians who went above and beyond to ensure that Jayden received the best possible care. Other treasures came in the form of co-workers, family, and church members who provided financial assistance to offset the cost of his care and the frequent travel to receive it. Fanesia says, “Meeting other parents caring for a child with complex medical needs, we began to fully understand the tremendous value of ‘hidden’ treasures. Starting our nonprofit organization allowed us to honor Jayden’s memory by passing these treasures on to other families who are dealing with the same challenges that we faced.”