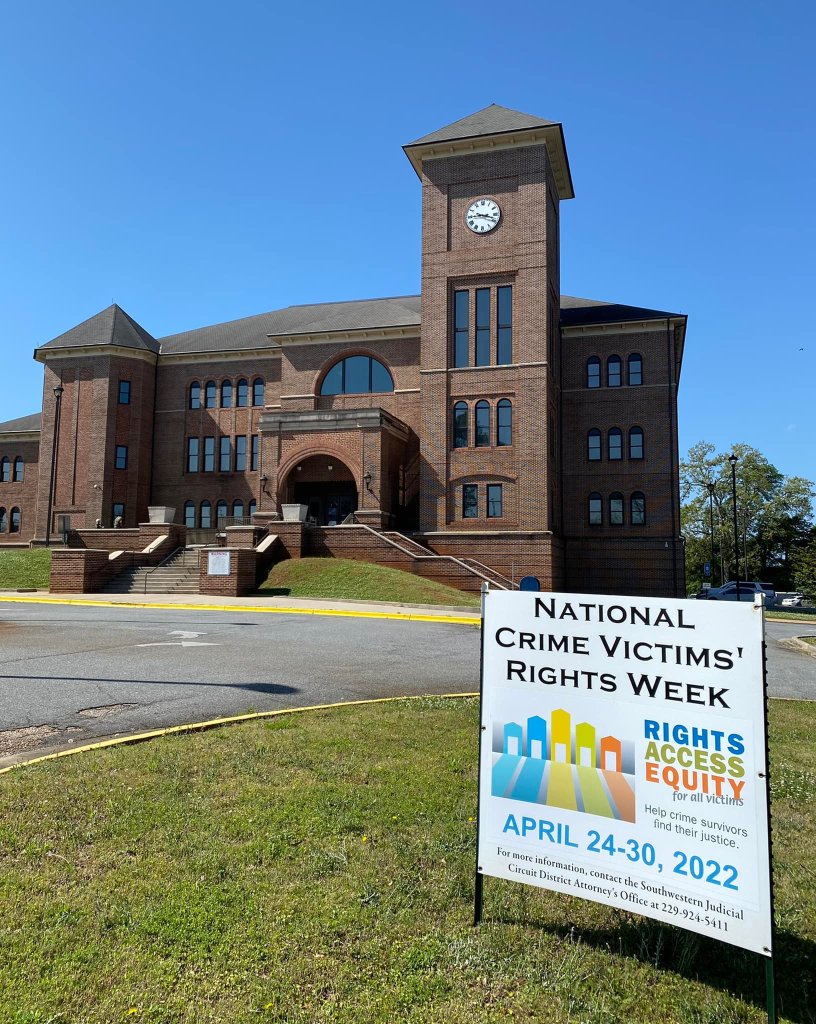 If you visit any of the courthouses in the Southwestern Judicial Circuit you will notice there is a sign indicating the week of April 24-30, 2022, as National Crime Victims’ Rights Week. Crime Victims’ Rights week has been acknowledged for 41 years. This year, the themes are “Rights, access and equality for all victims.” The hope is to “enforce victims’ rights, expanding access to services and ensuring equity and inclusion for all.”

District Attorney (DA) Lewis Lamb and his staff are bringing awareness to the issue and making a stand on behalf of victims. As the DA’s office states, “During National Crime Victims’ Rights Week, 2022 and throughout the year, we want to let the victims of crime know they are not alone.”

Lewis’ office is offering a great service to crime victims when they stand up in support of them. I would know, I have been a victim of violent crime. In my case, the three offenders were charged with armed robbery and aggravated assault. What does that actually mean? On May 21, 2015, three men who I had no knowledge or relationship with came up the blind side of my front porch on Lee Street, each with guns and mentioned the word, “money.” When I frantically took to my feet, I was met with an assault which included being pushed to the ground, a pistol whipping, kicking and punching.

With those three or so minutes, I was ushered into a judicial system I had minimal knowledge of. It was the Americus Police Department and the District Attorney’s office which had to walk me through this complicated and uncharted territory. After the offenders where apprehended, if I wanted to know what to expect in our judicial system, it was the DA’s office, sometimes the DA, sometimes one of the assistant district attorneys and often the victim advocate who invite the questions. The DA’s office knows all things legal, but they were also aware of the impact crime has on those who had suddenly found themselves powerless. They, thankfully, understood the dynamics and offered much grace as I navigated both through the system as well as through the emotional and physical trauma. They are aware of the team it will take some victims to make it back to “normal.” The DA introduced me to a victim advocate, and they introduced me to my new “rights” and the resources. Best I can remember, there was funding available to access therapy, medical treatment, loss of wages and other events which I didn’t need, such as crime scene cleaning. Our DA’s office was very much prepared for me to meet them with my brain on fire. They knew I would ask the same question over and over again. They knew they could be met with my rage, my overwhelming grief and fear, my complete inability to comprehend or even at times my complete detachment from the experience. Your DA’s office is gifted in knowing Georgia law, but you might be surprised to know they are also gifted in understanding how to handle victims who at any moment may be experiencing any one of an array of emotions. They are also really honest. They knew what might be difficult by way of going through the process and they approached me by informing me what to expect, including that I would be within feet of the three men. It was extremely helpful, as when you have been overwhelmed by a very shocking event, the last thing you need is to be bombarded with additional surprises.

So, they began to tell me about different stages of the process and what would be expected of me. They painted a picture of the information which was being gathered, who would likely being playing a role in the events and what those people meant to the case. They kept me abreast of my offender’s whereabouts, if they were out on bond and what the conditions of the bond were. The magistrate court played a huge role for me. I found I was most vulnerable at this point as I was particularly frightened the accused might have access to me or my property. Their ability to reach me again was dependent upon their ability to make a choice, a fiscal investment of some sort and some limitations set by the court. As I saw it, should they be released from the Sumter County jail, the only thing keeping them from crossing my path again was their decision making. As you can imagine, I was not at all confident in their ability to make good or kind decisions.

The DA’s office would tell me of my rights, some of which had already been determined and others which our judges would determine, and our law enforcement would enforce. When feeling extremely vulnerable, you want absolutes. I did not have a right to such. The DA’s office would have to break such news to me. While I am sure it is not an easy task, they always remembered I was a human who had sustained a trauma. They practice kindness; however, they had to be educators and fill me in on why movements did not always move at speeds I would like.

I had a right to be heard at certain points in the process. I had a right to participate in the process. I did not have a right to text the DA at any time of the day, although he welcomed it.  I did not have a right to ask his staff to justify every step they made in the approach they would take. However, they did. As much as they could say, “you matter” they said it. I made them prove to me I matter, and they were up for the task. When you have had your personal space and life invaded in such a vile way, you simply start to believe you don’t matter and it became the message I told myself over and over again. As much as I told myself I didn’t matter, the DA’s office was there to tell me I did.

There was one reality which I thought spoke volumes about our court system. The name of the case was The State of Georgia V. Defendants, except their proper and legal names were identified. Nowhere was Tracy K. Hall listed. It would seem like a rather small thing, but it was huge, and not being mentioned only served to ratify the message I didn’t matter. It was the DA’s office who reframed this for me. Yes, the accused names are prominent on the documents. But I had the full power of the State of Georgia behind me, they would be my voice. They promised it would be a powerful voice. They were not asking me to relinquish my voice, they were simply telling me the State of Georgia would join me. Huge shift in approach, right? My army had shown up. I was no longer a lone warrior. As my relationship to the DA’s office grew, my confidence did as well. They never said,
“Tracy it was it is, you’re going to have to live with it.” They did ask for the chance to prove I was in good hands. I could offer that chance. They were confident enough that when I couldn’t believe in our system, I simply believed that the DA’s office believed. It was enough.

While our law enforcement and judicial professionals are well versed in how to approach victims, sometimes we are not. My story, how I approached life after the event and what I needed is different than someone who may have had the very same experience with armed robbery and aggravated assault. There is no prescription which will apply to all victims. In my opinion, there is only one common truth for all victims. Each one is an individual and each one will need and want things as unique as they are. There are, however, some guides on how another can support a crime victim. From folks who know a lot about the impact of crime, I sought tips for those who are interested in supporting a victim. The Federal Bureau of Investigations offers them on their website. It is by no means a comprehensive or even applicable list to all victims, but it is a start, and a start I can personally attest to as  good. The FBI suggests for family and friends of a victim of crime:

If you would like to know more about what our DA’s office can offer a victim of crime, please call them at 229.924.5411. Also, please know victims in the State of Georgia have rights, those do not change between the 159 counties. However, just as victims are individuals, so are District Attorneys. When you vote for a DA, there are many considerations which can go into your choice. One which you might not consider is how they will approach victim populations. Determining the answer to such a question as “How will you approach the needs of a victim?” is indeed a worthy question. By asking it and taking the response into consideration before you vote might be one of the best ways you can support a victim. Thank you, Lewis Lamb and staff, for making your stand known. The Southwestern Judicial Circuit is better for enjoying your mindfulness. Thank you for telling me I matter. As for this victim, I am grateful and confident in handing my voice over to you. 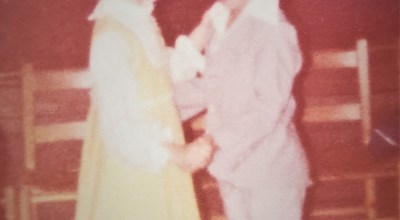