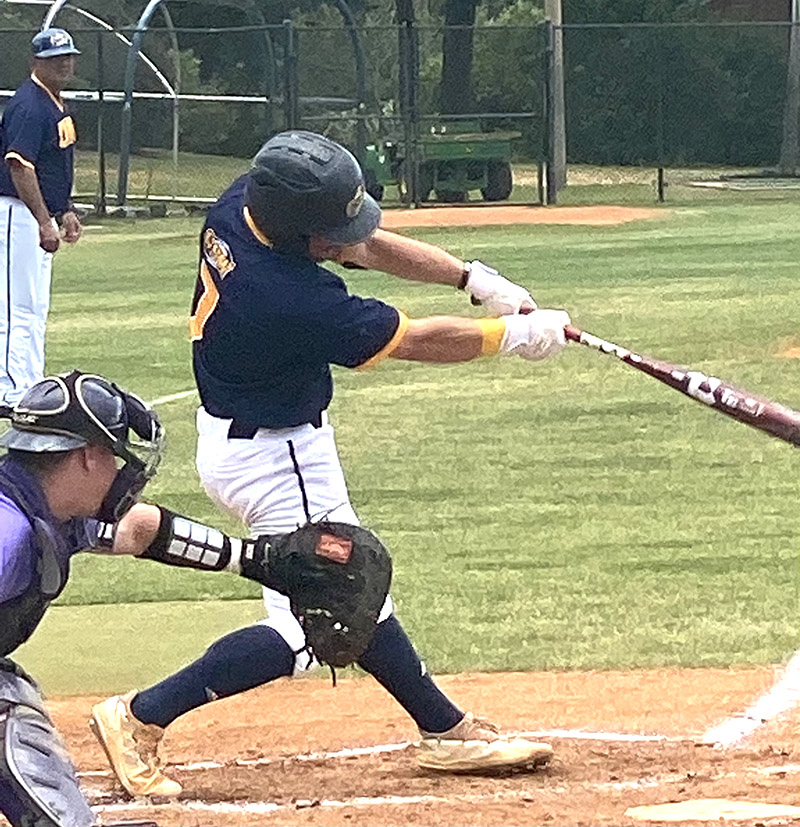 AMERICUS – Coming into Sunday’s regular season finale against Young Harris College (YHC), the Georgia Southwestern State University Baseball Team (GSW) was on a five game winning streak and had already taken two of the three games against the Mountain Lions on Saturday (11-1, 7-3). However, the Hurricanes could not solve YHC senior right hander McLain Harris, who pitched nine scoreless innings with 10 strikeouts while giving up four hits. As a result, the Hurricanes went down to defeat to the Mountain Lions 2-0 in their regular season finale at Hurricane Stadium on Sunday, May 1.

GSW finishes the regular season with an overall record of 25-24 and 17-10 in the Peach Belt Conference (PBC), which is good enough for third place in the final PBC standings. YHC also finished with a PBC record of 17-10, but the Hurricanes won the tiebreaker by virtue of taking two of the three games against the Mountain Lions.

The Hurricanes will be the #3 seed in the Peach Belt Conference Tournament, which begins on Friday, May 6. 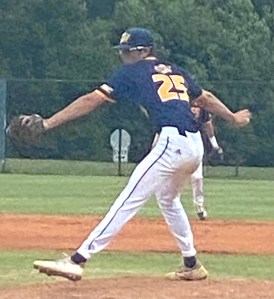 GSW sophomore pitcher Carsen Plumadore started on the mound for the Hurricanes against YHC in GSW’s regular season finale. Plumadore pitched six scoreless innings and gave up three hits while walking two and striking out two.
Photo by Ken Gustafson

GSW sophomore pitcher Carsen Plumadore got the start on the hill for the Hurricanes and pitched well over six innings of work, giving up no runs on three hits with two walks and two strikeouts. Brandt Sundean came on in relief of Plumadore and pitched well in his own right, but ran into trouble in the top of the eighth inning. With the bases loaded and one out in the eighth, Sundean hit YHC batter Aaron Copeland, allowing Jackson Jones to score the Mountain Lions’ first run of the game. Kyle Ayers then reached on a fielder’s choice that allowed Steven Spell to score and YHC had a 2-0 lead. That would eventually prove to be all the run production the Mountain Lions needed. Sundean gave up two runs on two hits, hit one batter and walked another in three innings of work.

GSW senior third baseman Tyler Skelton, who was one of four Hurricane seniors playing in their final regular season game, led the Hurricanes’ offense by going 2 for 4 at the plate. Redshirt sophomore catcher John Austin Sutton and redshirt junior second baseman Matthew Mamatas were the only other two Hurricanes with hits, as both went 1 for 3 in the contest.

In the first two games of the series on Saturday, the Hurricanes were dominant. In Game 1, they scored 11 runs on 13 hits, notching two doubles and two triples. Skelton went 3 for 4 with three RBIs and a run scored, while sophomore shortstop Miles Hartsfield went 3 for 5 with a double, a triple, an RBI and three runs scored. Junior catcher Greg Wozniak went 2 for 3 with a triple, two RBIs and a run scored and Mamatas went 2 for 4 with an RBI and two runs scored.

GSW redshirt senior starting pitcher Jared Donalson got the win for the Hurricanes (9-3). Donalson went the entire way, giving up one run on four hits and posting nine strikeouts to lead the Hurricanes to an 11-1 victory.

In Game 2, the Hurricanes jumped out to a 5-0 lead in the bottom of the first and that would set the tone for the rest of the game. Wozniak, redshirt junior centerfielder Hunter Foster and redshirt freshman DH Josh Newton each had RBI singles in this inning.

Redshirt senior first baseman Anthony Angelino went 2 for 4 with an RBI to lead the GSW offense and junior infielder Reid Ragsdale went 2 for 5 with a stolen base.

GSW redshirt sophomore pitcher Nick McCollum got the win for the Hurricanes (6-3). In seven innings of work, McCollum gave up one run on seven hits, walked one batter and struck out seven. Sophomore Colby Gordon came on in relief of McCollum. Over the final two innings, Gordon gave up two runs on five hits and posted two strikeouts.

The Hurricanes will host their first round game of the Peach Belt Conference Tournament, which begins on Friday, May 6. Date, time and opponent are still to be determined.

Information from this article was obtained from GSW’s athletic website: www.gswcanes.com, along with the Peach Belt Conference website: www.peachbeltconference.org.