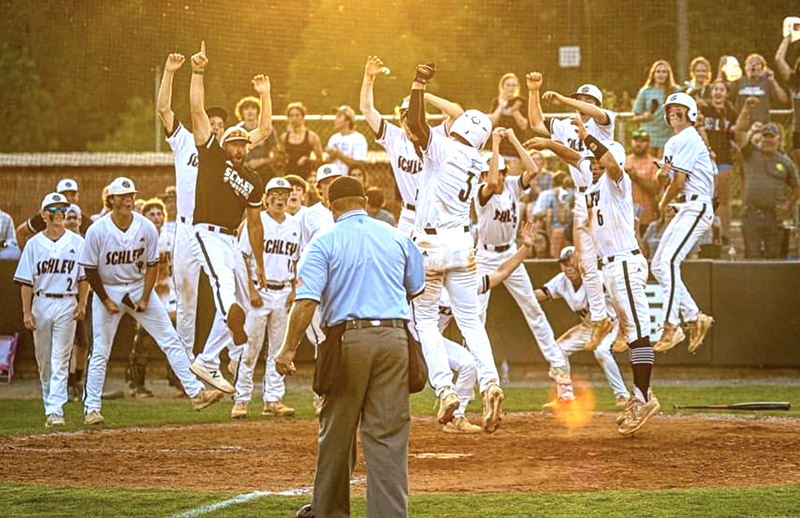 The entire Schley County Baseball Team gathers at home plate to celebrate as Trypp Lumpkin (#3) crosses the plate after belting a solo home run in the top of the fifth inning of Game 2 against Claxton. That home run proved to be the difference in the game, as the Wildcats went on to win 4-3. Photo by Ben Dodds

ELLAVILLE – Schley County senior pitcher Trypp Lumpkin pitched a scoreless two hitter in Game 1 and belted a solo home run in Game 2 to lead the Wildcats to a two-game sweep of the Claxton Tigers (CHS) by the scores of 1-0 and 4-3 on Wednesday, May 4 at Wildcat Park. The sweep vaults SCHS into the Elite 8 of the Georgia High School Association (GHSA) Class A-Public State Playoffs for the second year in a row.

The Wildcats (21-10) will head down to Folkston, GA on Tuesday, May 10, to take on Charlton County (28-7). The Indians split their first two games with Washington-Wilkes on Wednesday, losing Game 1 by the score of 2-1 and winning the second game 11-5. However, Charlton County won the third and deciding game by the score of 9-7. 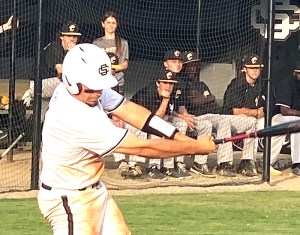 Schley County first baseman Jack Clark drove in the Wildcats’ only run in Game 1 and went 2 for 4 in Game 2 to help lead SCHS to a two game sweep of Claxton in the second round of the GHSA Class A-Public State Playoffs.
Photo by Ken Gustafson

It was a hard-fought sweep for SCHS over the Tigers and it took a lot of grit, determination and energy, but the players weren’t the only ones who had their energy sapped after those two games.

“I’m tired. I don’t know how those guys feel, but that took a lot of me just then,” SCHS Head Coach Chuck Cheek said. “Trypp was really, really good in Game 1. He had all of his pitches going. He attacked the strike zone. Our guys were locked in. They played tremendous defense and we squared some balls up.”

Lumpkin pitched a brilliant game for the Wildcats in Game 1. In a little over six innings of work, the senior gave up no runs on six hits, walked three and struck out nine CHS batters to lead his team to the 1-0 victory. With two outs and a runner on first in the top of the seventh, Ridge James came on in relief of Lumpkin and was able to get Tanner Henry to ground out to end the game. Lumpkin’s CHS counterpart, Hayden Morris, was equally as brilliant, as he gave up only one run on two hits while walking two batters and striking out eight.

“Morris is a fantastic pitcher, one of the best ones we’ve seen this year,” Cheek said. “We’ve played a lot of bigger schools with guys that are going to some pretty big time colleges and he’s as good as anybody we’ve seen this year. We battled. We had some good at bats. We had a seven to eight pitch at bat and even if it was a strikeout at the end, we got his pitch count up a little bit and we found a way to scratch one across.” 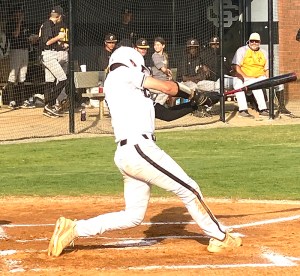 Schley County senior right fielder Trypp Lumpkin went a combined 2 for 5 with a homer, three RBIs and scored a run in the Wildcats’ two game sweep of the Tigers in the state playoffs. Lumpkin also pitched a two hitter in Game 1 to help lead SCHS to a 1-0 victory.
Photo by Ken Gustafson

That lone run scored by the Wildcats came in the bottom of the third inning. With two outs, Lumpkin was able to draw a walk from Morris and Sam Forehand, who ran as a courtesy runner for Lumpkin, stole second base to put a runner in scoring position for SCHS. Then Jack Clark singled to centerfield, but Forehand was able to score what ended up being the only run of the game as a result of an error committed by the CHS center fielder.

Throughout the game, the Tigers were able to put runners in scoring position, but each time, Lumpkin was able to pitch his way out of the situation. The Tigers also hurt themselves early in the top of the first inning when Robbie Lane, after notching a single to lead off the game, was picked off at first base when SCHS catcher Brody Fuller made a snap throw to Jack Clark, who tagged out Lane as he tried to get back to first base. 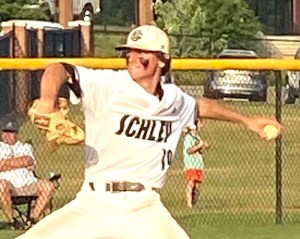 Schley County starting pitcher Owen Lamb gave up two runs on five hits, walked four and struck out four to help lead the Wildcats to a 4-3 series-clinching victory over Claxton in Game 2 in the second round of the state playoffs.
Photo by Ken Gustafson

“A lot of that was just Trypp. Trypp wouldn’t let us loose. He did a fantastic job,” Cheek said. Cheek went on to praise the work of Jack Clark, who came up with the game-winning hit in the bottom of the third that scored the winning run for SCHS.

“When we got the lead, we didn’t know if it would stand up. It’s hard to shut somebody out, especially in the playoffs because all of these teams are so good that are left,” Cheek said. “We made it through it. I was a little concerned after Game 1 that we were going to be able to maintain that intensity because they were coming back with their leadoff hitter Robbie Lane and he’s gong to college to play ball. That kid is really, really good. He’s their spark plug. He plays the game the right way and does everything the coach wants him to do.” 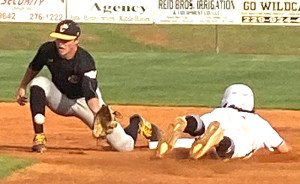 Clark earned both of the Wildcats’ two hits in the game as he went 2 for 3 with two singles. As for CHS (14-14), Lane led the Tigers’ offense by going 3 for 4 at the plate with three singles.

In Game 2, the Wildcats scored three runs on four hits in the top of the third and got the game winner in the fifth on Lumpkin’s solo home run. The Tigers got to within a run in the bottom of the fifth on a home run by Cade Sikes and were able to get the tying run in scoring position in that same inning, but Ridge James, who came on in relief of SCHS starter Owen Lamb, was able to strike out Austin McDilda to end the threat. Over the next two innings, James only allowed two CHS base runners to reach and with one out and a man on first in the bottom of the seventh, he struck out both Christian Mixon and Nathan Deloach to seal the 4-3 victory for the Wildcats and their berth into the Elite 8 of the state playoffs. 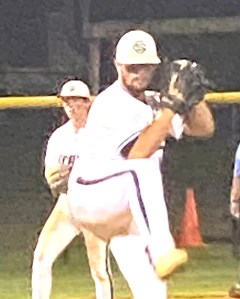 Schley County pitcher Ridge James retired the final CHS batter in Game 1 and gave up a run on one hit in relief in Game 2 to help lead the Wildcats to the two game sweep of Claxton in the state playoffs.

The Tigers were the “home team” in Game 2 and took a 1-0 lead in the bottom of the first inning on a sacrifice fly by Eli Sapp. However, the Wildcats responded with three runs in the top of the third. Owen Shufflebarger led off with a single and Carson Westbrook drove in Shufflebarger on an RBI double to tie the game. Brody Fuller then laid down a bunt that was misplayed by the Tigers’ infield and would later advance to second on a passed ball. Then Lumpkin drove in two runs on an RBI single to give SCHS a 3-1 lead.

However, CHS responded in its half of the third by taking advantage of two walks and a bunt single by Eli Sapp to load the bases. Cade Sikes then drove in Robbie Lane on a sacrifice fly and the Tigers were within one, trailing 3-2. Fortunately for the Wildcats, Owen Lamb was able to strike out Hayden Morris and got Christian Mixon to ground out to prevent further damage. 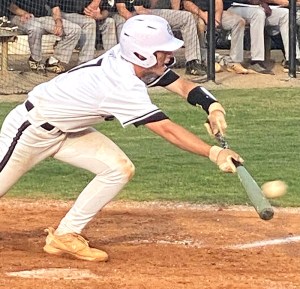 Schley County third baseman Carson Westbrook tries to lay down a bunt against Claxton in Game 2. Westbrook went a combined 1 for 5 with an RBI double and a run scored in the two game series against the Tigers.
Photo by Ken Gustafson

However, in the top of the fifth inning, Lumpkin continued his heroics in this series as he led off with a solo home run over the center field wall to give the Wildcats a 4-2 lead. Sikes’s homer in the bottom of the fifth brought the Tigers to within a run, but that would be as close as they would get.

Lumpkin led the SCHS offense by going 2 for 3 at the plate with a solo home run, a double and three RBIs, but he was not alone in the Wildcats’ hit parade. Owen Shufflebarger also went 2 for 3 with a run scored and Jack Clark went 2 for 4 with two singles. SCHS also got an RBI on a double from Carson Westbrook and Trenton Stubbs went 1 for 1 with a double. 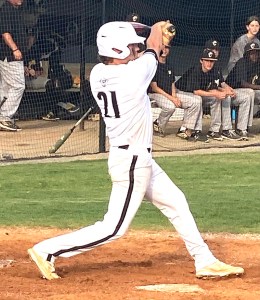 Schley County outfielder Owen Shufflebarger went 2 for 3 with two singles in Game 2 against the Tigers.
Photo by Ken Gustafson

Lamb was solid for the Wildcats as their Game 2 starter. In four innings of work, Lamb gave up two runs on five hits, walked four and struck out four. James, who came on in relief for Lumpkin to get the last out of Game 1, came on in relief of Lamb in Game 2. In three innings of work, James gave up a run on one hit, walked two and struck out three.

“Lamb goes out and we got down a little bit early, but then we tied it. We took the lead. Trypp extends it for us, hits a shot out of center,” Cheek said. “We did a lot of little things to get our runs. We got some bunts down, stole a base and came through with a big hit. Our defense was just outstanding. I think we made one error late and other than that, we were pretty clean. Owen (Lamb) gave us four good ones. We haven’t had Ridge (James) a whole lot. There was a little bit of an injury there and we’ve been trying to work him back a little bit and he was phenomenal the first half of the year.” Cheek went on to say that due to his injury, James had not been available of late, but they were trying to save him for the right time. “He did a great job when he came in,” Cheek said. “He gave us a chance, held them down. He made an error there late in the seventh and it gave them (CHS) a base runner, but he didn’t get rattled. He did what you would expect of a senior. Our seniors came through for us today and a lot of other guys too. I’m really proud of them,” Cheek continued.

The Tigers were led offensively in Game 2 by Sikes, who went 2 for 4 with a solo home run and two RBIs. Robbie Lane was the Game 2 starting pitcher for CHS. In six innings of work, Lane gave up four runs on eight hits, walked three and struck out six. Morris, who started Game 1 for the Tigers, came on in relief in the seventh inning. He gave up no runs while walking one and striking out two.

The Wildcats will now take on the Indians of Charlton County on Tuesday in Folkston, GA in the Elite 8 (quarterfinals). There will be a doubleheader on Tuesday, May 10. Game 1 will begin at 4 p.m., followed by Game 2 at 6 p.m. If a third game is necessary, it will be played on Wednesday, May 11 at 3:30 p.m.