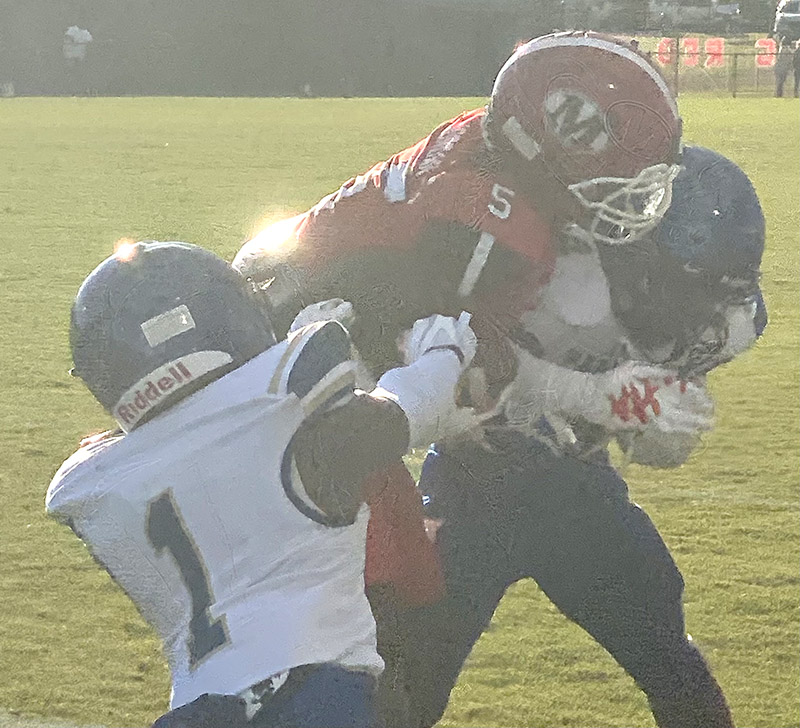 BUENA VISTA, GA – For new Sumter County High School Head Football Coach Clifford Fedd, his staff and his players, the new era of Sumter County Panther football couldn’t get started soon enough. The Panthers competed against Marion County (MCH) in a spring scrimmage Friday night, May 13, at Eagle Stadium on the MCH campus. While the final score was 16-14 in favor of MCH, the team’s performance on both sides of the ball gave Coach Fedd and his staff optimism as the spring practice season ends and the summer workouts begin in preparation for the upcoming 2022 season in August.

“The kids got out and they flew around. They did a good job. They hustled,” Fedd said. “They executed some of the things that we implemented over the past couple of weeks. We’ve only had eight days of practice and then we played a game. Due to inclement weather, we lost one day of practice on last Friday, so for us to be able to come out and do the things that we did tonight, after eight days of practice, I’m proud. I’m proud to be a Panther. We are about to restore panther Pride back to Americus, GA.” 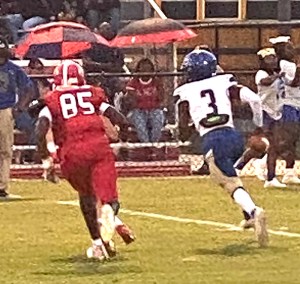 Sumter County senior quarterback Cameron Evans rolls to his right to try and find a receiver.
Photo by Ken Gustafson

One ironic twist in this scrimmage was that former Sumter County Head Coach Ross Couch was on the other sideline serving as the MCH offensive coordinator.

There was no kickoff to start the game and the Eagles’ offense got the ball first. They were making a slow, methodical drive under the direction of freshman quarterback Ty Goodroe. However, the Panthers forced a fumble and Keaston Taylor recovered the ball at the MCH 30 yard line. However, on the Panthers’ first play from scrimmage, a block in the back penalty was called and it backed up SCHS to the MCH 46.

The Panthers were not able to move the ball on that possession and were forced to punt it back to the Eagles. However, with about three minutes left in the first quarter, lightning was spotted and both teams headed to their locker rooms for a GHSA-mandated 20 minute lightning delay. 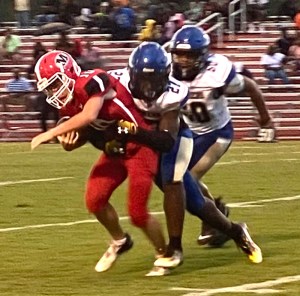 Once play resumed, the Eagles had the ball, but the Panther defense was able to penetrate the MCH backfield and made plays to close out the scoreless first quarter.

On the Panthers’ first offensive possession to start the second quarter, quarterback Cameron Evans threw a strike to Brandon Pope, who scampered 45 yards for an SCHS touchdown. The extra point attempt by Jose Diaz-Perez was missed, but the Panthers led MCH 6-0 with 10:47 left before halftime.

The Eagles would respond late in the first half. They were able to move the ball down to the SCHS 11 yard line before Goodroe found Myles Jorden-King in the end zone for a touchdown. The extra point attempt by Cecil Young was good and the Panthers trailed 7-6 at the half.

Throughout the first half, the SCHS defense was aggressive and made several plays in the backfield of the Eagles. 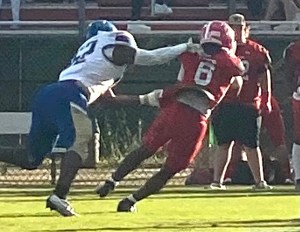 Unfortunately for SCHS, a penalty backed up the Panthers, forcing second down and 15. Evans’ pass was then intercepted by King, nullifying the SCHS drive.

The Eagles had the ball at their own eight-yard line, but running back Dekryn Hurley broke through the SCHS defensive line for a big play. However, the SCHS defense stiffened up again and forced MCH to punt with 3:07 to go in the third quarter.

On the next SCHS possession, the Panthers made another big passing play. On third and eight from the MCH 38 with 2:20 to go in the third, Evans threw a 38-yard touchdown pass to Anthony Tyson. The Panthers decided to go for two and Tyson ran the ball into the end zone to complete the try, giving SCHS a 14-7 lead.

In the fourth quarter, both teams played their younger players to give them some experience. On the Panthers’ first possession of the quarter, freshman running back Quay’Shawn Tatum ran the ball for a huge play, but on the next play from scrimmage, SCHS fumbled the ball and it was recovered by the Eagles at the SCHS 34 yard line. Quarterback Jayden Richardson then made an 11-yard run down the sidelines to the Panthers’ 22. A couple of players later, Richardson scored on a quarterback keeper. Richardson then tried to score a two-point conversion, but was knocked out of bounds just shy of the goal line. Nevertheless, the Panthers led 14-13 with 3:38 to go in the scrimmage. 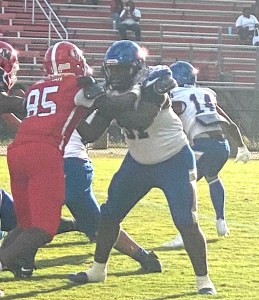 On their next possession, the Panthers turned the ball over again when the ball was snapped over the quarterback’s head and it was recovered by the Eagles. MCH took advantage of the turnover when with 10.8 seconds left, Cecil Young kicked a 37-yard field goal as time expired to win the game 16-14.