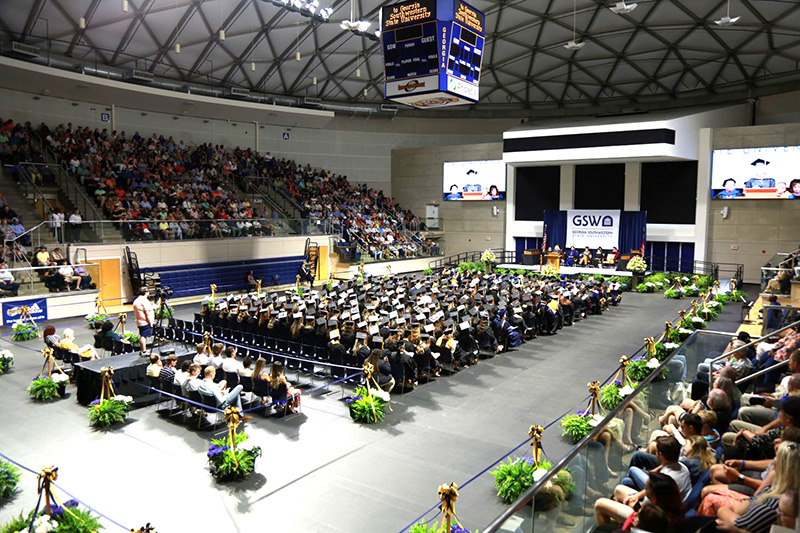 Kathleen Lang Tucker speaks to graduates on behalf of the GSW Alumni Association as Past President. Photo by GSW

AMERICUS, GA (May 16, 2022) – Georgia Southwestern State University (GSW) recognized approximately 293 graduates in the Spring Class of 2022 on Friday, May 16 inside the Convocation Hall of the Student Success Center. There were 231 graduates earning their bachelor’s degrees, 61 earning their master’s, and one earning her specialist.

GSW President Neal Weaver, Ph.D., congratulated the graduates on their hard-earned accomplishment and recognized those who completed their degree in four years or less, as well as those who took a less direct path to graduation. 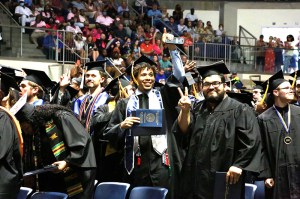 Tripp Larkey of Zebulon, Joe Lovelace of Gainesville, Fl., and Nicholas Marchant of Colquitt wave to family and friends in the crowd at the ceremony.
Photo by GSW

Of the 231 undergraduate students, 113 started as traditional freshmen and 118 were transfers. Among the 293 total graduates, there were students from 13 states and 12 countries ranging in age from 20 to 67 – some stepping foot on campus for the first time as they were fully online students.

Receiving their Master of Business in Administration (MBA), graduates from the College of Business and Computing flew in from all over the world to walk across the stage and receive their diploma. Lisa Marie Gonzalez, receiving her fifth degree, and Tek Beyene both flew in from California, Matthew Edwards came from New Jersey, and Katharina Novizky-Hosp travelled all the way from Austria. 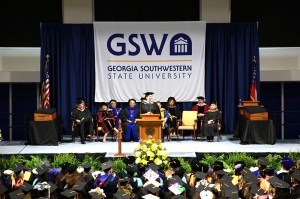 Bárbara Rivera Holmes, president and CEO of the Albany Area Chamber of Commerce, served as the commencement speaker. Holmes also represents the Second Congressional District of the University System of Georgia Board of Regents. 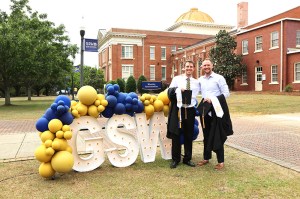 Jacob Peed of Reynolds, a business major, and Austin Cobb of Savannah, a nursing major, became best friends and roommates their freshmen year leading to a lifelong friendship.
Photo by GSW

The Macebearer for the ceremony was Chadwick Gugg, Ph.D., president of the faculty senate and professor of mathematics in the College of Arts and Sciences. The Grand Marshal was Jeffrey Green, professor of dramatic arts. 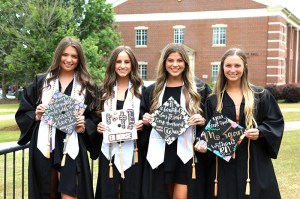 The ceremony was streamed live and is available on GSW’s YouTube channel. More pictures from the day can be found on GSW’s Facebook page.