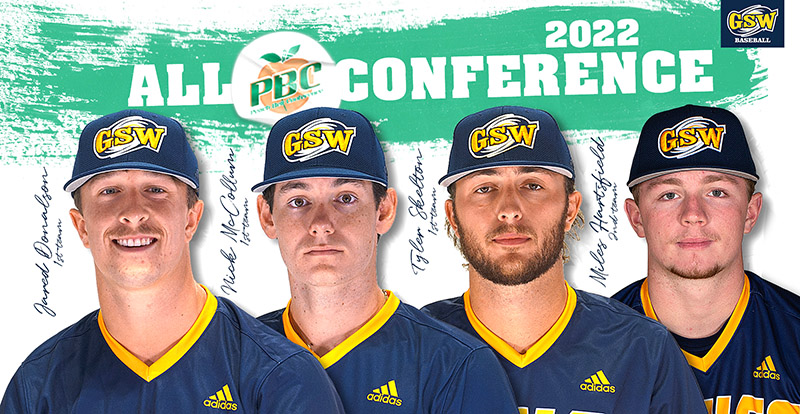 Donalson’s final season has been statistically one of the best seasons by a GSW pitcher in school history. Donalson currently sits 4th in the nation in strikeouts, Wins, and fifth in ERA this season. He ranks first in the Peach in strikeouts, ERA, opposing batting average, and wins. He has won three Peach Belt Conference Pitcher of the Week awards and two Region Pitcher of the Week awards. In the opening round of the Peach Belt Conference tournament, Donalson opened up the series pitching eight innings allowing just one run on three hits with 10 strikeouts and throwing 121 pitches to give the Hurricanes the series lead on Saturday. On Sunday, the senior returned to the mound to close out the third and deciding game of the series earning the first save of his career pitching two innings giving up zero earned runs, and striking out four batters. Donalson becomes the second straight GSW Pitcher of the Year selected for the award after Tucker Smith won last season.

Nick McCollum joins Donalson as one of the five pitchers selected for the all-conference first team. McCollum was the Saturday starter in the Hurricanes’ weekend starters. The redshirt sophomore from Richmond Hill, Ga. pitched 87 innings for the Hurricanes winning six games and getting 94 strikeouts. His 2.82 conference ERA ranks third in the Peach Belt, he also ranks third in strikeouts and fourth in opposing batting average. His best game of the season came at North Georgia where McCollum pitched nine shutout innings allowing six hits and 5 strikeouts.

Tyler Skelton a senior from Forsyth, Ga. hit .335 for the Hurricanes this season from the second spot in the batting order. The third baseman played in 54 games and drove in 31 RBIs and scored 34 times this season and ranks third in the Peach Belt in hits. Skelton has played in 113 games for the Hurricanes in his career and finishes his final season in Americus as a first-team All-Conference selection. His best game of the season came at Albany State where he racked up six RBIs on four hits highlighted by three doubles.

Miles Hartsfield has been a swiss army knife for Georgia Southwestern this season. Starting the season in centerfield the sophomore from Gainesville, Ga. made multiple defensive highlights in centerfield before being called into action to play shortstop for the Hurricanes. Hartsfield continued to flash the glove on multiple occasions after his move to the infield which coincided with the Hurricanes’ Peach Belt Conference run in which they didn’t lose a single conference series for the rest of the regular season. Hartsfield is hitting .303 with 24 RBIs, he leads the team in triples, stolen bases, on-base percentage and walks. He is the national leader in walks and ranks fourth in the Peach Belt for on-base percentage and leads the league in triples this season.