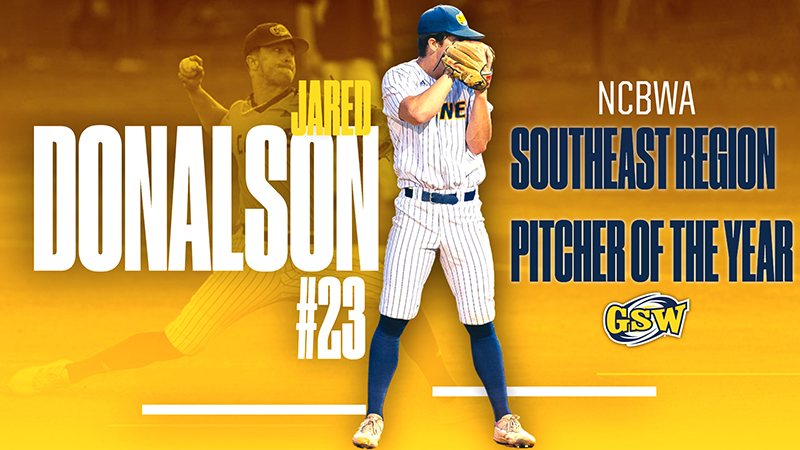 Donalson was also named as a first team All-Region selection and will be up for All-America nominations. Jared Donalson‘s final season was statistically one of the best seasons by a GSW pitcher in school history. The redshirt senior is 10-3 on the season, compiling a 1.81 ERA while piling up 121 strikeouts in 99 1/3 innings of work. Donalson has tossed three complete games on the year, while holding opponents to a .189 batting average. Donalson finished his season 4th in the nation in strikeouts, Wins, and fifth in ERA. He finished first in the Peach in strikeouts, ERA, opposing batting average, and wins. He won three Peach Belt Conference Pitcher of the Week awards and two Region Pitcher of the Week awards.

In the opening round of the Peach Belt Conference tournament, Donalson opened up the series pitching eight innings allowing just one run on three hits with 10 strikeouts and throwing 121 pitches to give the Hurricanes the series lead. The senior returned to the mound to close out the third and deciding game of the series earning the first save of his career pitching two innings giving up zero earned runs, and striking out four batters. Donalson became the second straight GSW Pitcher of the Year selected for the award after Tucker Smith won the previous season.