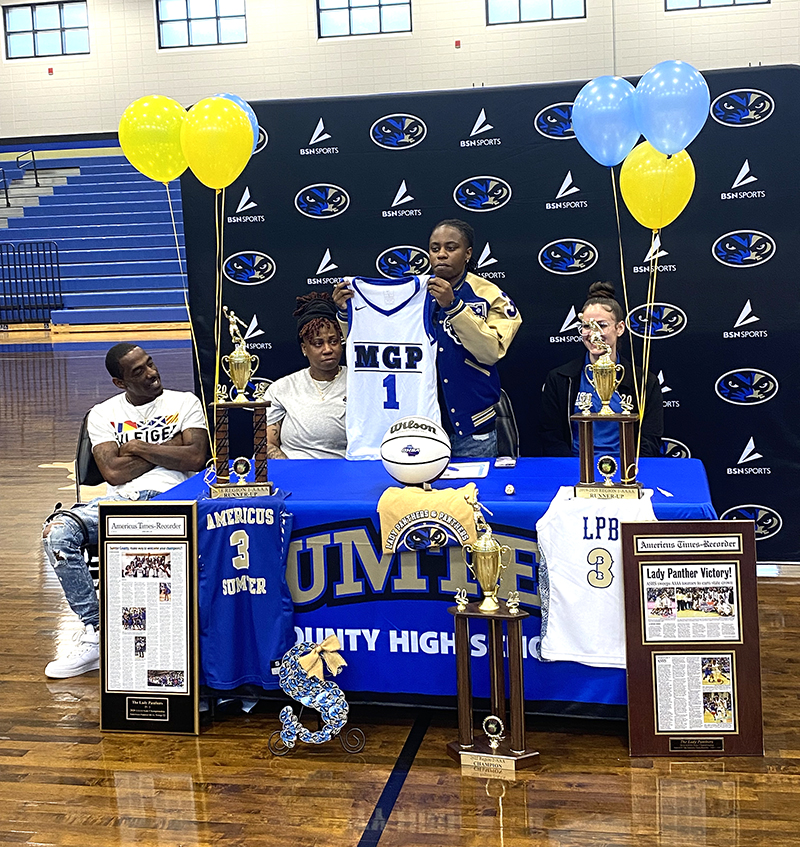 Goodman was recruited by Albany State, Fort Valley State and Talladega College in Alabama, but decided to attend MGP.

“I liked the fact that they will let me go ahead and get my core classes out of the way,” Goodman said. “Then, by the time I get done with those, I will be able to transfer to another school.”

Sumter County Head Coach Sherri Harris told the crowd gathered that during the four years that Goodman has played for her, she has been a great student and a die-hard lover of basketball. Harris went on to remark how seriously Goodman’s mother, Ashley Goodman, took academics. Harris mentioned that when Goodman was in ninth grade, she got a C on a test in one of her classes and her mother would not let her practice or play until she got that grade up. Harris went on to say that she had not had any discipline issues with Goodman and she told MPG Assistant Coach Samantha Gilbert, who was in the gym for the signing, that she doesn’t know if she really understands what she’s getting in Goodman, but by November, Gilbert will thank her.

“A lot of these kids are missing out on scholarships primarily because of the transfer portal,” Harris told the crowd. “A lot of kids are getting that extra COVID year back, so it hurt great kids that are dedicated to the game and could be playing at a higher level, mainly because of that. In my opinion, Coach (Gilbert), you’ve got a good one,” Harris continued. Harris went on to say that when it was time for the coaches to vote for the Region 2-AAA Player of the Year for the 2021-2022 season, half of the coaches in the region liked Goodman, but the other half liked her teammate, Trinity Jackson. The final vote came down to Harris and she said that was the toughest decision that she had to make. In the end, Harris stated that the coaches decided that both Goodman and Jackson would be Co-Players of the Year.

Before she signed her letter of intent, Goodman addressed the crowd and started out by thanking God, her coaches, her pastor, her family and her friends for helping her and pushing her to get to this point in her life. “I also would like to thank everyone that has played a part during my high school journey,” Goodman told the crowd.

After Goodman signed her letter of intent, MPG Head Coach Samantha Gilbert told the crowd that she is excited about the player that she is getting in Goodman. Gilbert said that she initially came out to watch another player, but that Goodman caught her eye. “She caught my attention on the court. Everything she was doing out there….She played hard the whole entire time,” Gilbert said. “She was a good team player out there. Her attitude was good and I could just tell that she put her all into it. Coach Gilbert went on to say that when Goodman came up to the MGP campus at Gordon State, they put her through some workouts and the attitude that Gilbert saw from Goodman in the game she played was the same attitude throughout her workouts at MGP and that it wasn’t just a one time fluke that she saw. “I ended up watching her play again and it was the same thing,” Gilbert said. “That’s just what we’re looking for and that’s the type of players we need.”

In an interview with the Americus Times-Recorder, Coach Harris stated that it was hard to put into words what Goodman has meant to her and Sumter County girls’ basketball program, having dealt with Goodman since ninth grade. “She’s going to do great things no matter what she does because she’s one of those kids that puts her whole heart into everything she’s doing, as you saw in the last game that we played,” Harris said. Harris was referring to the Lady Panthers’ final game of the year in the state playoffs, when they lost to Westminster in the state quarterfinals. In that game, Goodman was injured, but begged Coach Harris to allow her to continue to play in spite of the injury. “She decided that she was going to try and will herself through that. She’s going to be a huge asset to Gordon State in the coming years. It’s kind of exciting and sad,” Harris continued.