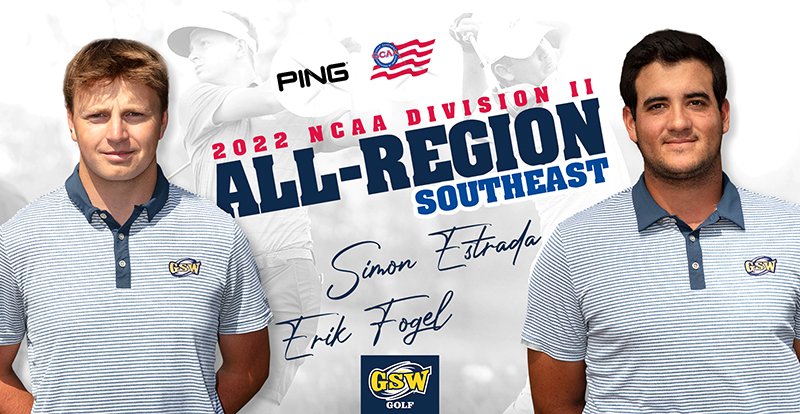 Estrada and Fogel were named to the team after leading GSW to their second straight Final Four appearance. The Hurricanes were two strokes away from returning to the national championship match, losing to eventual Division II National Champion, Lee University in the semifinal.

Estrada, a sophomore from Armenia, Columbia, continued his success as a Hurricane this season, earning his second all-region and second all-conference selection. Estrada had Top 15 finishes in four tournaments this season, with his best result at the Motor City Preview in October at the NCAA Division II National Championship host site TPC Michigan, where Estrada placed second leading the Hurricanes to the tournament win. He posted a 72.69 scoring average through 29 rounds.

Fogel, a freshman from Stockholm, Sweden, was a breakout star for the Hurricanes this season finishing in the Top 10 of two tournaments including the Peach Belt Conference Championships. His best finish was seventh place at the highly competitive Hurricane Invitational hosted by GSW. Fogel led the Hurricanes with a 71.94 scoring average through 18 rounds, which ranked seventh in the Peach Belt.

Estrada and Fogel return in the fall and look to help GSW return to another appearance in the national championship.