Action heats up in the Dwight Harris Basketball Summer League 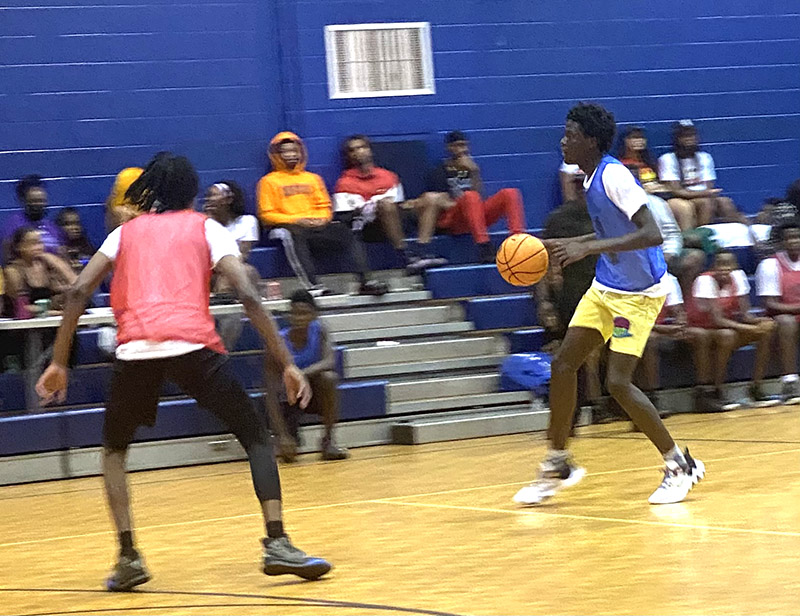 Latravis Angry of the 17U Mavericks, who also plays high school ball for Sumter County, scored seven points in the Mavericks’ loss to the Warriors. Photo by Ken Gustafson

AMERICUS – For several boys and girls throughout Sumter County and the surrounding counties, the summer time is a great time to do fun, exciting and healthy things. One of those things is participating in the annual summer-long Dwight Harris Basketball Summer League that takes place Monday through Saturday all summer long at the Ninth Grade Academy.

Dwight Harris, who is the Athletic Manager for the Sumter County Parks and Recreation Department, started the league several years ago with the purpose of getting the county’s youth off the streets and away from the dangers of crime and into a positive, constructive environment. According to both Harris and recorded documentation from the Sumter County Sheriff’s Office, since the league’s inception, crime among young people during the summer months in Sumter County has dropped significantly as a result. 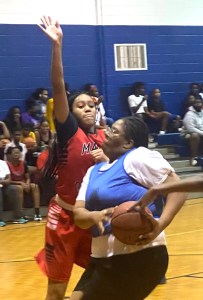 Madison Shelton, who plays her high school ball at Sumter County, drives the lane for the 17U Aces.
Photo by Ken Gustafson

This year’s league began play back on Wednesday, June 1 and there will be games daily Monday through Saturday throughout the summer until the playoffs in late July. On Monday, June 6, there were four exciting games, with one of them having to be decided in overtime.

The first game of the day was a hard-fought battle between the 11U Celtics and Grizzlies. The Grizzlies jumped out to a 15-9 lead in the first half, but the Celtics made a run late in the game and closed the gap to 23-20.
However, that run would not be enough as the Grizzlies held on to win 25-21.
Ayden Arnett led the Grizzlies in scoring with 11 points and Kearsten Little led the Celtics with 11. 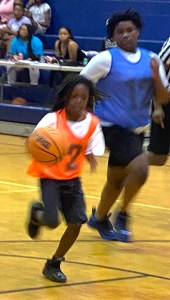 Bradley Brown of the 11U Celtics dribbles his way towards the basket.
Photo by Ken Gustafson

The second game of the day was perhaps the most exciting of the four games. It featured the Bucks and the Suns in the boys’ 14U Division. It was a back-and-forth affair the entire way and by the end of regulation, the score was tied at 36-36 and a winner would have to be decided in overtime. In the extra session, the 14U Bucks were able to outlast the Suns, taking the game by the score of 39-36.

In the third game of the evening, the girls took the floor. This contest featured the 17U Aces against a team made up of players from Macon County High School. It was a hard-fought contest the entire way, but MC came out on top 43-35.
Both Deziqa McClendon and Mya Waters led MC with eight points and D’eria Clark led the Aces with 13. Clark’s teammate, Jestynie Scott, scored 12 in the losing cause.

The final game of the evening featured two high school boys’ teams with several local high school standouts. The 17U Warriors took on the 17U Mavericks in a hard-fought contest, but the Warriors came out on top by the score of 46-35. Jackson Harris, who plays his high school ball at Deerfield-Windsor, led the Warriors with 13 points and his Sumter County High School teammate, Corey Wright, chipped in 12. Southland Academy’s Luke Exley scored nine points to lead the Mavericks and his teammate, James White, also scored nine points in the losing cause.
There will be games every Monday through Saturday throughout the Summer at the Ninth Grade Academy leading up to the playoffs in late July.