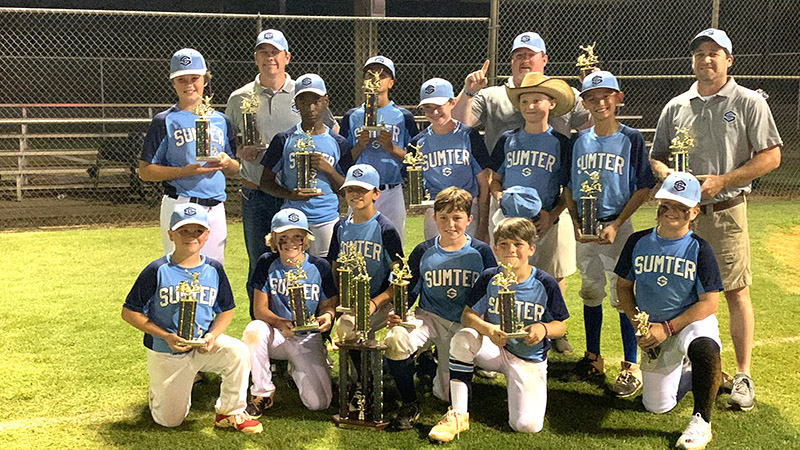 HAWKINSVILLE, GA – The Sumter County 12u all star Baseball team began their 2022 all star campaign with the Hawkinsville Memorial Tournament in Hawkinsville, GA. The Bombers as they are affectionately known, finished the tournament with a 3 -0 record.

The Bombers opened the tournament on fire and defeated a rebuilding Hawkinsville team. During the contest against Hawkinsville, every Bomber reached base offensively as the boys from Sumter recorded 16 hits. Matthew Owens and Mason Dowdey combined to allow one run on one hit over three innings, striking out eight batters. David Guest, Clay Hicks, Max Kelley, Charlie Kellam, Gage Norman, Matthew Owens and William Webb all had two hits for the Bombers. The win advanced Sumter County to play a veteran Telfair County Team. The winner of the game would advance to the championship. Telfair County took an early 1-0 lead and extended that lead to 3-0 in the top of the third inning. The Bombers responded by scoring four runs in the bottom of the third and then shut Telfair out the rest of the way to win the game 7-3.

Max Kelley and Clay Hicks allowed three runs on four hits over six innings, striking out 11 batters. Braylan Carson, David Guest, Logan Webb and William Webb all drove in runs for Sumter County. With the win, the Sumter All Stars guaranteed themselves to be the home team in the championship game. In the championship game, the Bombers would again face Telfair County. Telfair County would again take a 1-0 lead in the 1st inning. However the Bombers wasted no time regaining the lead this time, as the they scored two runs in the bottom of the first. Sumter County played solid defense up the middle as Charlie Kellam and Wes Brock were able to get several force outs at second base and almost turned a double play.

The Bombers stretched their lead to 8-1, then Telfair began to fight back and scored two more runs in the top of the 5th inning. With two outs and runners on first and second and two outs, catcher Noah Hosley took matters into his own hands and picked off the runner at first to end the rally, the game, and the tournament.

The Sumter 12u All Stars are coached by Lewis Webb, and William Webb. “These young men came out and represented Sumter County with great class during this tournament,” Coach Lewis Webb said. “The guys played together as a team and we really don’t have a best player. It’s more of a group effort and every single one of the guys contributed to this win. We look forward to the competition at District in Moultrie. I want to thank Time Estes and Jeff Fussell and our Sponsors William Webb Farms, and Ameri-Green Environmental Recycling.”

The bombers finished the tournamnets with 29 hit over 14 innings and scored 37 runs. They allowed 10 hits and 7 runs while striking out 27 batters over 14 innings.