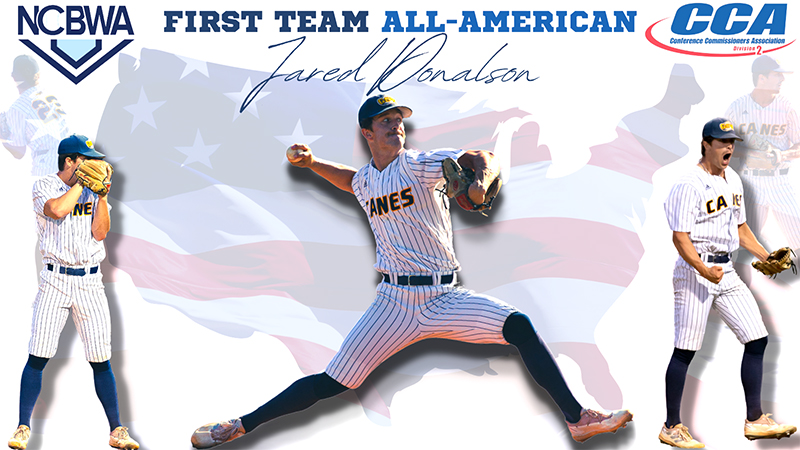 AMERICUS — The 2022 National College Baseball Writers Association and the CCA announced their NCAA Div. II All-America Teams on Thursday and GSW senior starting pitcher Jared Donalson has become the first Hurricane to be named a first team All-American in the NCAA era.

Donalson compiled a 1.81 ERA while piling up 121 strikeouts in 99 1/3 innings of work. Donalson tossed three complete games on the year while holding opponents to a .189 batting average. Donalson finished his season 4th in the nation in strikeouts, wins, and fifth in ERA. He finished first in the Peach Belt in strikeouts, ERA, opposing batting average, and wins. He won three Peach Belt Conference Pitcher of the Week awards, in a row, and two Region Pitcher of the Week awards.

Donalson leaves GSW after the most decorated season in school history and the best team finish in the NCAA era. Donalson led the team to their first-round conference tournament series win over the University of North Georgia winning the first game of the series as the starter and then getting the final outs and earning the save in the series-clinching win just one day later. Donalson earned the third straight PBC Pitcher of the Year award for the Hurricanes after Tucker Smith won it in the 2019 and 2021 seasons. Donalson leaves GSW and moves on to Savannah, Ga. where he is currently a starting pitcher for the Savannah Bananas in the Coastal Plains League this summer.

A total of 48 student-athletes were named to either the first, second, or third-team All-America squad while 16 were named honorable mention. The CCA All-America and All-Region baseball teams, which are selected by College Sports Information Directors of America (CoSIDA) members from schools playing Division II baseball, were first established in 2007. This is the seventh year in which the program is solely sponsored by the Division II Conference Commissioners Association.

1B Micah Morgan So. Spring Hill (Ala.)