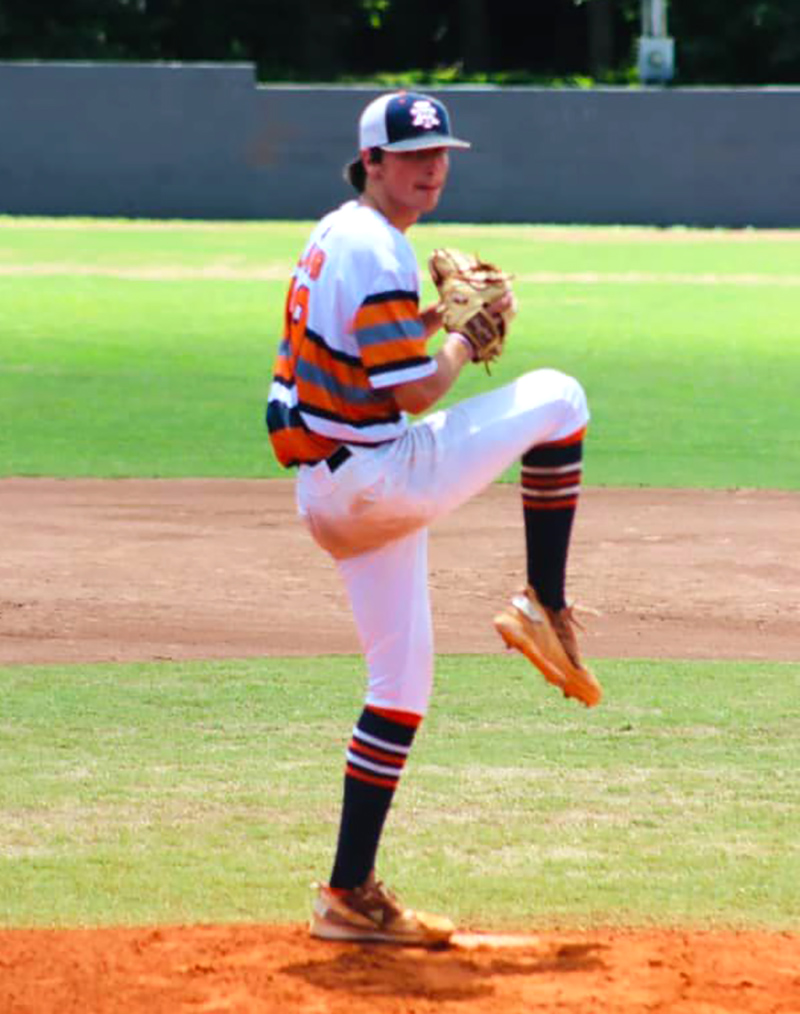 Americus Travelers pitcher Owen Lamb, who also pitches for Schley County, allowed two runs on three hits in five innings of work to help lead the Travelers to a 10-2 victory over the SOPRO 18 & Under Team from Dothan, AL at the Perfect Game Junior College Showcase. Photo by Angel Dozier Lamb

OZARK, AL – Last weekend, July 1-3, the Americus Travelers 17 & Under Baseball Club played in the Perfect Game Junior College Showcase Series in Ozark, AL. The 10- team event featured many of the top 17 and 18-year-old teams in the region. The tournament was held at historic Eagle Stadium, a former minor league park much like Thomas Bell Stadium in Americus.
In Game One, Travelers starter Caden King pitched five innings and struck out nine batters against the Gulf Coast Pelicans 18U team from the Panama City / Destin, FL area. The Travelers allowed five runs on five hits, but three errors allowed four of the Pelicans five runs. Perry Usher, Caden King and Trip Thomas all had late inning RBI’s to pull the team to within one run, but the Travelers would drop Game One by a score of 5-4. Usher and his high school teammate, Henry Johnson, collected multiple hits in the loss.
In the second game of pool play, the Travelers would face another formidable opponent in the Five Star West 18U team. Chase Ledger got the win on the mound, going five innings and allowing five hits while striking out eight. Perry Usher would come on to earn the save in a 6-5 Travelers win. Peyton Tompkins doubled in an RBI in the first inning and Ledger lead the Travelers offensively by going 3-3, including a 360’ foot home run. The big blow came in the fifth inning with the game tied at 5-5, when Gavin Lacey had an RBI single with two outs to drive in the go-ahead run.
By earning a split in pool play, scoring 10 runs and allowing 10 runs, the run differential of zero gave the Travelers a spot in bracket play as the #2 seed from Pool A. They would face off against the undefeated SOPRO 18 & Under team from Dothan, AL. The Travelers exploded in the first inning with nine runs on eight hits en route to a 10-2 win. Schley County High School standout pitcher Owen Lamb got the win on the mound for the Travelers, as he pitched five strong innings. The southpaw allowed two runs on three hits in his outing. Landon Kight came on in relief to secure the win. Offensively Americus was lead by Kight, who had three hits in the contest. Lamb, Henry Johnson, Perry Usher, Caden King, Tripp Thomas and Peyton Tompkins all had RBI’s in the game. The win would set up a championship game between the Travelers and the Alabama Outlaws, who are the reigning Dixie Majors World Series champions. Perry Usher got the start on the mound. He went three innings and allowed four runs on five hits, while walking one and hitting three batters. Landon Kight came on in relief, but the Travelers dropped the championship game to the Outlaws by the score of 5-3. Gavin Lacey and Henry Johnson lead the Travelers with two hits each.
“We played our best baseball of the summer,” Americus Travelers Head Coach Tim Estes said. “We saw some really good arms; guys throwing in the upper 80’s and we hit it really well all weekend”.

The Perfect Game Junior College Showcase was designed to allow several area Junior Colleges in Alabama, Florida and Georgia the opportunity to see multiple 2022 and 2023 players in one location.
The Travelers will begin play at the Prospectwire World Series in Port St. Lucie, FL on Saturday, July 9th. The event is being held at Clover Park; the Spring Training home of the New York Mets. The Pool Play Schedule for the Travelers is:
7/9 at 8:00 AM vs. TBT Swarm Southeast Black

This will be the final tournament for Head Coach Tim Estes, as he will retire from coaching the Travelers. Estes started the program in 1995 and has been the Head Coach and/or the Director of Operations each year of the program’s existence. He has recorded 512 wins and won three national championships during those years. Estes has assisted more than 50 former players in earning baseball scholarships and has seen six former Travelers play professionally. “It’s been a great journey and I’ve been blessed with so many talented players over the years,” Estes said. “We’ve had tremendous assistant coaches, great families and unbelievable support. I’ll cherish the relationships that I’ve built over the years more than anything.”