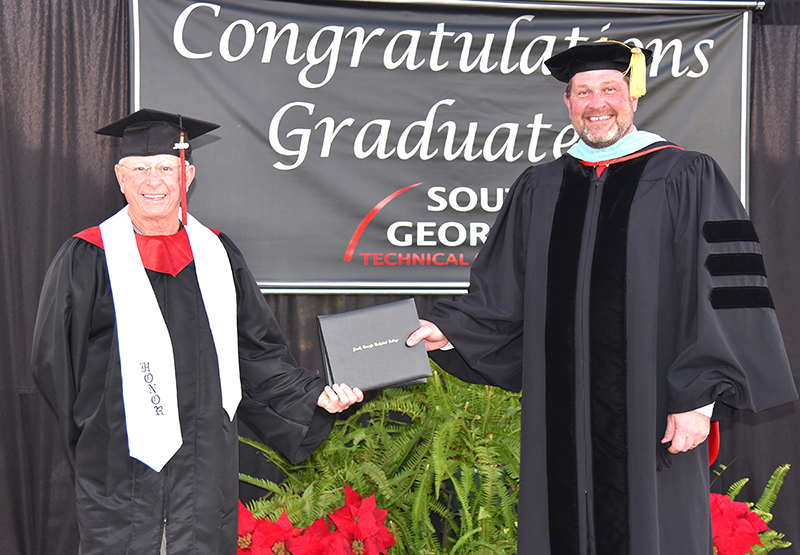 AMERICUS –  “Making a difference in someone’s life is the best thing you can do,” said retired Telecommunications Executive Jack Walton Stanley, who initially graduated from South Georgia Tech in Electronics in 1967 and returned 53-years later in 2020 to receive his Associate Degree in Electronics with honors.

He and his family and friends are now hoping to make that same kind of difference in the next generation by establishing the Jack Walton Stanley Family Scholarship endowment with the South Georgia Technical College Foundation. The scholarship is open to students from Dodge County, Georgia as well as to Electronics majors.  It can also be awarded to general scholarship recipients if there are no qualified students from Dodge County or the Electronics program in the semester the scholarship is awarded.

“The instructors at South Georgia Technical College made a tremendous difference in my life.  I hope this endowed scholarship will create the same type of opportunity for the next generation of students,” said Stanley, who retired after nearly 33 years with Time Warner Cable and over 45 years in the industry.  At the time of his retirement, he was the Regional Vice President Government Relations, Southeast, and was responsible for the company’s state/local government affairs interest and legislative policy for North Carolina, South Carolina, Alabama, and Virginia.

The honorable Howard Coble of North Carolina recognized Jack Stanley with a salute in the Congressional Record for the House of Representatives in 2012 and honored Jack W. Stanley with the title of “Mr. Cable Television in North Carolina.”  Stanley also received the Order of the Long Leaf Pine award by North Carolina Governor Bev Purdue in November of 2012.  This is the highest honor given by North Carolina’s governors to persons who have made significant contributions to the state and their communities through their exemplary service and exceptional accomplishments.

The training and education Stanley received from South Georgia Tech in 1967 stood the test of time and prepared him for a career that spanned over four decades of innovation and growth.  He was known among his peers “as an innovative leader who is committed to exceptional customer service and who has the ability to forge positive relationships with consumers, employees and public officials.”  He served four separate terms as President of the North Carolina Cable Telecommunications Association.

“Probably the thing I enjoyed most in my job as a Division President for Time Warner was the opportunity I had to open doors for others,” said Stanley.  “I absolutely loved being able to give others the opportunity to grow and succeed.  Making a difference in someone’s life is the best thing you can do.”

And even though he has officially retired, he is still providing opportunities and opening doors for others through the Jack Walton Stanley Family Scholarship at South Georgia Technical College.  Dr. Connie Book, President of Elon University in North Carolina, initiated the endowed scholarship as a gift in honor of Jack Stanley and his family.  He has since expanded that initial gift as his way of “giving back” to the college where it all began.

The road to Jack Stanley’s success had humble beginnings in Georgia.  He grew up in Chauncey, Georgia, outside of Eastman in Dodge County.  He was the son of a farmer and grew up in modest circumstances.  He learned the lessons of hard work and respect for others and those are traits he carried with him throughout his career.

Today he lives in Summerfield, NC, but maintains and manages his home place in Dodge County, which is now named Pine Barrens Plantation, LLC. This is an enterprise dedicated to principled stewardship, sound conservation practices and preservation of native longleaf forest habitat in its historic range in Georgia.

The determination and resiliency instilled in Stanley from his humble beginning also drove him to contact South Georgia Technical College in 2006 to see about upgrading his electronics diploma to an associate’s degree even though he had already become extremely successful in his career.

He graduated with honors in 1967, but since he had been out of college for a number of years and was new to online classes, he decided to take a diploma level algebra class prior to taking college algebra.  That diploma level algebra class was the only class he failed to make an “A” in.  It also kept him from being a Presidential Honor Graduate with a perfect 4.0.  However, he still graduated with honors with an overall 3.98 GPA.

“I made an ‘A’ in the college algebra class and I might have been able to go straight into that class but I thought I needed a refresher since I had been out of school for so many years,” said Stanley.  “I was a little nervous about taking math online, but it worked out.”

Today, Stanley is thankful for the tough moments in his life and his career. “I always enjoyed and thrived on going places in need of operational improvements,” said Stanley. “Much of my career was spent in operational improvements.  To stay in business, you must be creative and constantly looking for ways to improve.  I believe this is good advice for young people today.  If we do our jobs well, we not only prevent problems from occurring but it makes for a more professionally run operation.”

He also closed with other words of wisdom for the next generation of students who continue their education at South Georgia Technical College.  “Find something you like to do and go be the best you can be.”

For more information about the Jack Stanley Family Scholarship or the South Georgia Technical College contact SGTC Vice President of Institutional Advancement and Executive Director of the SGTC Foundation Su Ann Bird at 229-931-2248 or sbird@southgatech.edu or the SGTC Foundation, P.O. Box 6102, Americus, GA 31709.