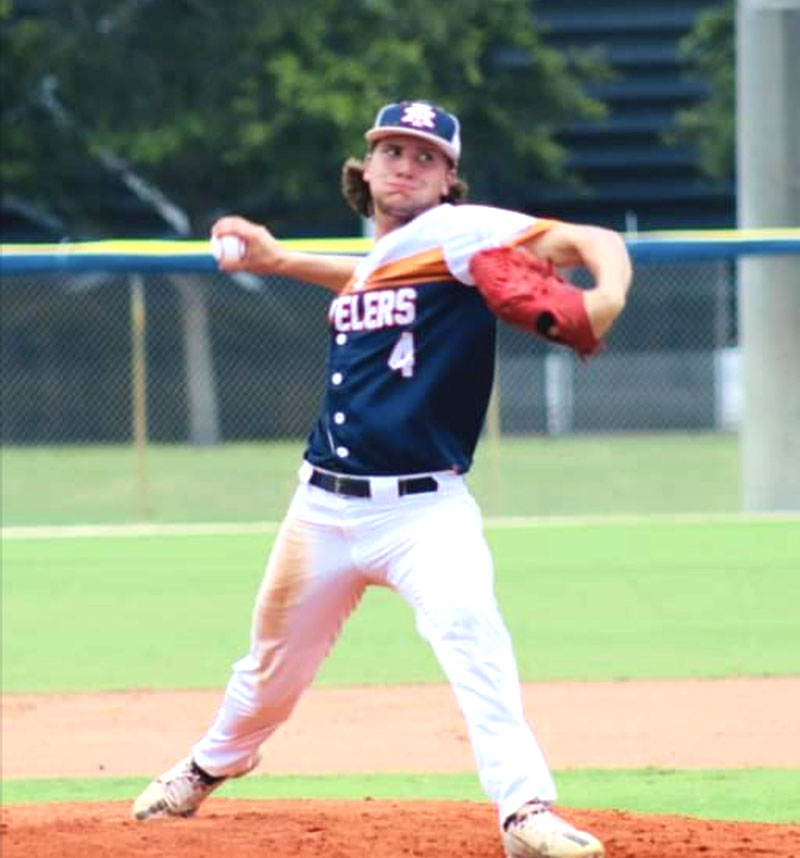 PORT ST. LUCIE, FL – The Americus Travelers 17U Baseball Club made it to the semi-finals of the Prospectwire World Series Friday through Tuesday, July 9-12, in Port St. Lucie, Florida at the Spring Training home of the New York Mets.

Travelers Head Coach Tim Estes team has competed all Summer at some of the top events in the Southeast and felt his team was as prepared as they could be for the final tournament of the year in South Florida.

The Travelers would face a gauntlet of talent during their pool play portion of the tournament. In Game One, the Travelers faced off with the TBT Swarm Southeast Black. Chase Ledger got the start on the mound. He went two innings allowing one run on one hit, striking out one. Gavin Lacey drew a first inning walk and would later score on a fielder’s choice to give the Travelers a 1-0 lead. Landon Kight came on in relief and allowed three runs on three hits. Peyton Tompkins, Thomas Willis, Henry Johnson, Tripp Thomas and Caden King all notched hits for the Travelers who lost a heartbreaker 4 – 3.

In Game Two of pool play, the opponent was Daytona Select 2023, who was one of the top programs in the state of Florida. Daytona got on the scoreboard early when Tomas Page drove in George Morales for the 1 – 0 Daytona lead. In the third inning, Henry Johnson had an RBI single to drive in the lone Travelers run. Johnson was 2 – 2 on the day. Owen Lamb and Henry Johnson kept the Daytona Hitters at bay, only allowing four hits. The game ended in a 1 – 1 tie.

Pool Play continued on Sunday with the Travelers taking on the Freshwater Storm 17u National. Caden King threw a gem for the Travelers, going the distance, striking out 8 and walking 1 in a blowout 10-0 victory for Americus. Thomas Ray, Henry Johnson, Thomas Willis and Landon Kight all had multiple hits and RBI’s in the contest. Peyton Tompkins doubled in the first inning to drive in a run. Caden King was the tournament’s pitcher of the day and was featured on the Prospectwire Twitter Feed.

On Monday, the pool play portion of the tournament would come to a close with a matchup against DLT baseball of Orlando, Florida. A single by Peyton Tompkins in the first inning was one of only 4 hits for the Travelers.  Perry Usher, Thomas Willis and Caden King also collected one hit each. Willis took the 5 – 0 loss on the mound. This made the final record for pool play 1 – 2 – 1 for the Travelers. While it looked as if this wouldn’t be good enough to get the Travelers into the Championship bracket; an eligibility issue with the #1 seeded team gave the Travelers the #8 seed and placed them into championship play against the new #1 seed DLT Baseball – the team they had just lost to on the final day of pool play. On Tuesday morning, the Travelers would send Schley County left hander Owen Lamb to the mound and he was on point.

The Southpaw went four innings allowing four hits and three runs while striking out three. Landon Kight would come on to relieve and he too had the magic touch as he finished the game allowing no runs on only 1 hit. The Travelers would score one run in the first inning, 2 more in the third inning, one in the 4th and 1 in the 5th inning to take the 5 – 3 win over the tournament’s top seed.  Lamb, Kight and Henry Johnson all had multiple hits to lead the Travelers. This advanced Americus into the tournament’s semi-final round against Viper’s Baseball of West Palm Beach. One bright spot in the contest was a triple by catcher Gavin Lacey. Peyton Tompkins took the loss on the mound. Lacey and Caden King would notch the only Travelers hits in the 7 – 0 loss and elimination from the tournament.

“This was without a doubt the most well run, most competitive tournament we have ever been a part of,” Travelers Head Coach Tim Estes said. “I tip my cap to the teams, the tournament organizers, the event people. It was such a great event and we competed with some of the best talent in the country. I am proud of our guys”. This ends a long tenure for Coach Estes, as he has announced his retirement from coaching in the summers. Since 1995 he has seen more than 50 of his former players sign college baseball scholarships and six go on to ink professional contracts. He has more than 500 wins in his tenure as the head coach. His teams have won eight Georgia State Championships, been in six National Championship games winning three National Titles including the 2007 USSSA 17U Major, 2020 Top Gun 15U Summer Nationals and the 2021 Perfect Game 16U Gulf Coast World Series. As he departs from his role of coaching he hopes that several of this group will earn college baseball scholarships: “I certainly believe that many of these young men will get the opportunity to play at the next level and will continue to work for them behind the scenes to encourage college coaches to sign them,” Estes said.