Teams gear up for DHBC Playoffs 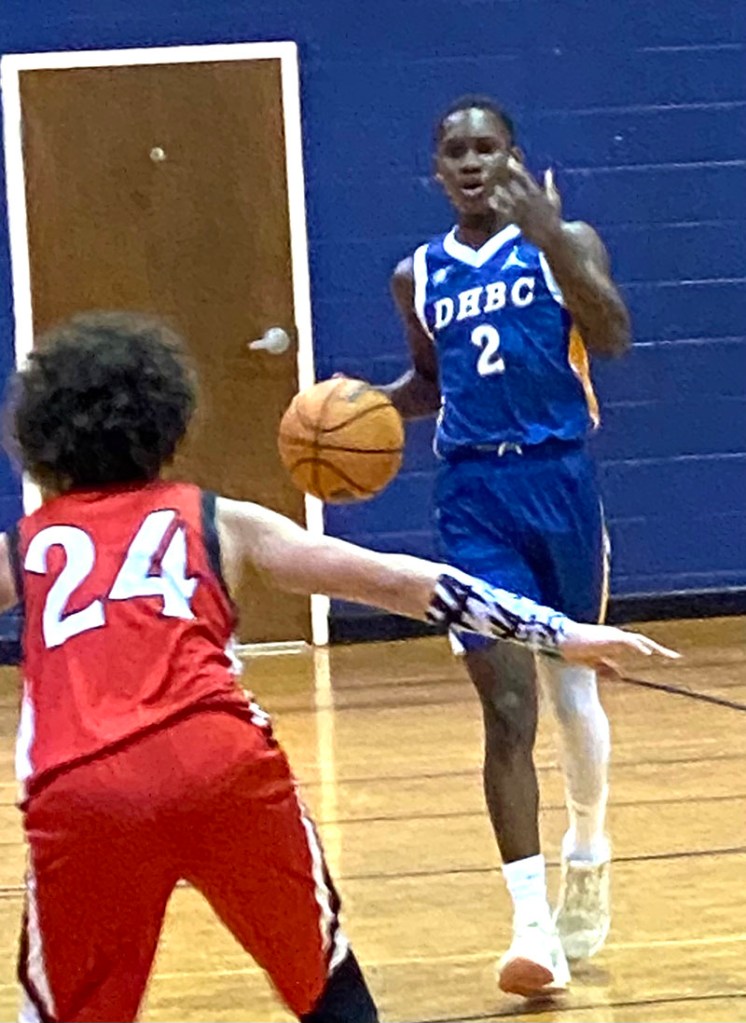 14U Mavericks Point Guard Jayshun Bobbs directs traffic for his team against the 14U Heat. Bobbs score two points in the Mavericks’ win. Photo by Ken Gustafson

AMERICUS – With just two days left in the regular season of the Dwight Harris Boys Club (DHBC) Basketball League, on Monday, July 25, several teams in the various age groups prepared themselves for the DHBC Playoffs, which begin on Wednesday, July 27.

Monday’s action at the Ninth Grade Academy Gymnasium began with two teams in the Boys 11U Division: the Mavericks and the Heat. However, the Mavericks jumped out to a huge lead early and left no doubt as to what the game’s outcome would be. The Mavericks exerted total control of the contest and they would go on to defeat the Heat 55-15. 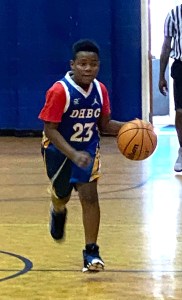 11U Mavericks Point Guard Jamarrion Pride scored six points to help lead his team to a 55-15 victory over the 11U Heat.
Photo by Ken Gustafson

The second game between the Warriors and the Grizzlies in the Boys 14U Division was much more closer and competitive. Over the first few minutes of the first half, the game was a back-and-forth affair. However, the Warriors would go on a 9-2 run and would not relinquish the lead thereafter. 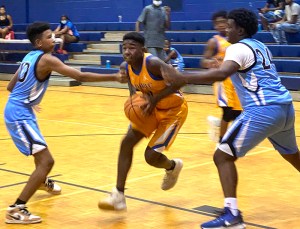 Austin Davis of the 14U Warriors drives to the basket against the Grizzlies. Davis led the Warriors with 16 points.
Photo by Ken Gustafson

The Grizzlies were able to cut their deficit to six at 51-45 in the waning seconds of the game on a basket by Saige Maddox, but that would be as close as they would get as the Warriors went on to win 53-47.

Austin Davis led the Warriors with 16 points and Maddox led the Grizzlies with 21 points.

Game 3 of the evening featured another Boys 14U matchup between the Bucks and the Celtics. The Bucks jumped out to a 10-2 lead early, but the Celtics went on a 12-6 run to cut their deficit to 16-14. With 44 seconds left in the first half, the Bucks’ point guard, Jamere Storey, drained a three-pointer to give his team a 19-14 lead at the half. 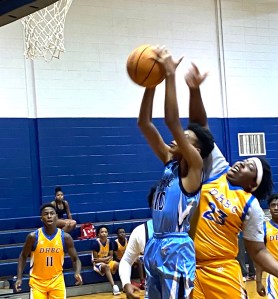 Tavaris Davis of the 14U Grizzlies goes up and grabs a rebound. Davis scored six points in the loss to the Warriors.
Photo by Ken Gustafson

However, over the first 10 minutes of the second half, the Celtics made their move and outscored the Bucks 22-9 to take a 36-28 lead. As the second half continued, the Celtics used their defensive pressure to force turnovers and by the six-minute mark, they led 40-28.
The Bucks tried to regain their form, but we’re unable to stop the momentum of the Celtics. As a result, the Celtics went on to win 45-39.

Jayden Terry led the Celtics with 19 points and Shadrick Robinson led the Bucks in scoring with 17.

The final game of the evening featured another Boys 14U matchup between the Heat and the Mavericks. Over the first 10 minutes, it was mostly an evenly played affair, with the Mavericks leading 12-11. 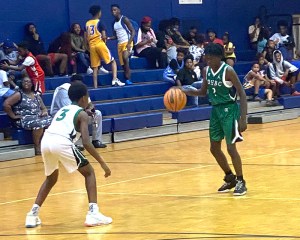 14U Bucks Point Guard Kentravious Waters directs traffic against the Celtics. Waters scored 11 points in the loss to the Celtics.
Photo by Ken Gustafson

However, over the next few minutes, the Mavericks went on a 7-0 run to take a 19-11 lead with a little over eight minutes left before halftime, but the Heat made a run of their own and cut the Mavericks’ lead to 19-15.

Then with a little under three minutes left before the half, the Heat’s Briceton Terry completed an 8-0 run when he tied the game at 19-19 on a three-pointer. With 46 seconds left before halftime, Terry hit another three-pointer to give his team a 24-23 lead and that ended up being the score at the half.

However, the Mavericks got off to a hot start in the second half, outscoring the Heat 13-3 over the first 12 minutes to take a 36-27 lead.

As the minutes continued to wind down, the Mavericks continued to assert their dominance over the contest and would go on to win by the score of 49-32.

Christopher Luster led the victorious Mavericks with 13 points and Briceton Terry led the Heat with 14 points in the losing cause.

The last day of the regular season is on Tuesday, July 26 and the DHBC Playoffs in all age groups begin on Wednesday, July 27 and go all the way through Championship Sunday, July 31.