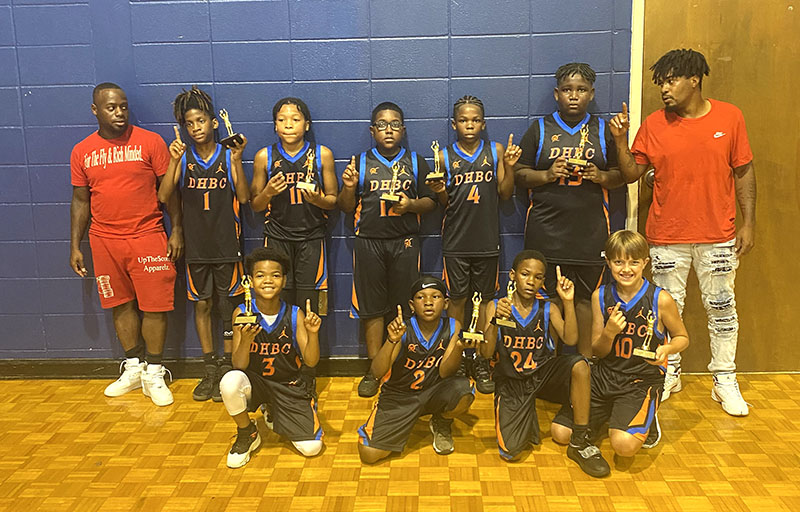 AMERICUS – It was the day that all of the teams in the Dwight Harris Boys Club (DHBC) Basketball League were hoping to be a part of: Championship Sunday on July 31 at Ninth Grade Academy. Twelve teams from the various age groups ranging from 7-17 years old competed all summer long and fought their way through the rigors of the DHBC league playoffs this past week to get to this point for a chance to be crowned champions, but only six of those teams would realize that dream.

The first game on Championship Sunday featured the 8U Championship Game between the “Orange Team and the Blue Team.”  The Blue Team jumped out to a 13-1 lead in the first half, but the Orange Team responded in the second half by scoring 10 unanswered points to get themselves back in it 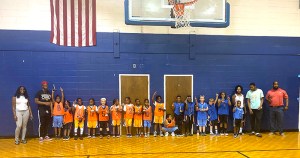 With a little over seven minutes left in the game, the boys in orange tied the game at 13-13 and what looked to be a blowout was now a competitive game. 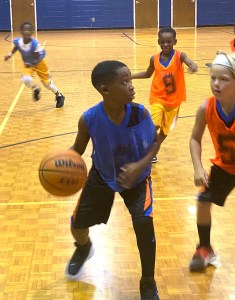 Mann Mitchell of the 8U Blue Team tries to drive to the basket.
Photo by Ken Gustafson

Over the final six minutes, both teams scored two points to tie the score at 15-15, but the game would end in a 15-15 tie and both teams were declared champions.
Chance Roberts led the Blue Team with 12 points and Robert Taylor scored five to lead the Orange Team. 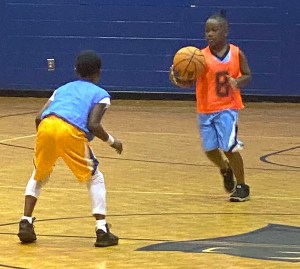 : Jayden Slaughter brings the ball up the court for the 8U Orange Team.
Photo by Ken Gustafson

Game Two of Championship Sunday featured the Boys 11U Championship Game between the Mavericks and the Suns. The first half was a close back-and forth affair, with the score tied at 22-22 at halftime. 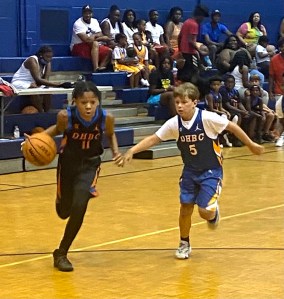 Chaston Green of the 11U Suns scored 19 points to lead his team to the 11U Championship in the DHBC Basketball League.
Photo by Ken Gustafson

Over the first 10 minutes of the second half, both teams continued to compete hard and the score was tied at 31-31 at one point. However, the Suns turned up their defensive pressure and were able to create turnovers. As a result, they took a 35-33 lead.

However, with a little over seven minutes left, the Mavericks took a 38-35 lead on a three-pointer by Aiden Williams. This game looked as if it would be decided on the last possession, as one might expect in a championship game. 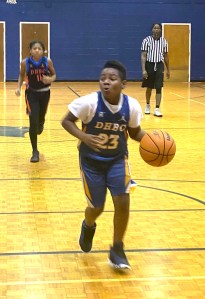 Jamarrion Pride of the 11U Mavericks scored 18 points to lead his team against the Suns.
Photo by Ken Gustafson

During the closing minutes, both teams continued to battle back and forth, but with 53.3 seconds left, Elijah Fuller gave the Suns a 45-44 lead on a jumper. Then with 38 seconds left, the Suns’ Chaston Green scored, was fouled on the play and made the free throw. That would prove to be the decisive play, as the Suns would go on to win the Boys 11U Championship by the score of 48-44.

Chaston Green led the victorious Suns with 19 points and Jamarrion Pride led the Mavericks with 18. 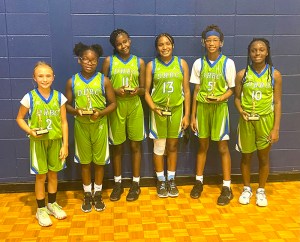 The Wings scored the first two baskets of the second half to take a 12-7 lead, but both teams were struggling with turnovers. However, the Mystics responded with three unanswered points of their own to close the gap to 12-10.

However, the Wings responded with a steal and a fast break basket by Claire Fletcher to give themselves a 14-10 lead. By the end of the third quarter, the Wings had a 16-12 lead with one more quarter to play to decide the Girls 12U Championship. 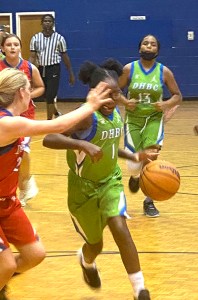 The Wings’ Laila Patrick drives to the basket against the Mystics.
Photo by Ken Gustafson

Much of the fourth quarter was low scoring, but with the Wings leading 16-14, the Mystics’ Sara Fussell got a steal and scored to tie the game at 16-16. However, the Wings answered with a 4-0 run of their own, which included another layup by Fletcher. That would end up being enough to give the Wings a 20-16 victory and the Girls 12U Championship.

Fletcher led the Wings in scoring with eight points and Zaya Solomon led the Mystics with seven. 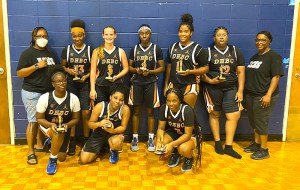 Game Four of DHBC Championship Sunday featured the Aces and the Mystics in the Girls 17U Division. This matchup also featured two of the most outstanding high school point guards in the area: Tiffani Goodman of Sumter County, who has already graduated, and Jesstynie Scott of Schley County, who will be a sophomore this fall.

The first half was a low-scoring affair, but it was tightly contested with the Aces leading 20-18 at halftime. Over the first four minutes of the third quarter, the Aces continued to maintain the lead, but Ja’Niah Edwards was able to score for the Mystics to cut their deficit to 28-24.However, the Aces responded with a 5-0 run late in the third quarter and continued to maintain their lead the rest of the game due to cold shooting by the Mystics. As a result, the Aces emerged as the Girls 17U Champions with a 41-32 victory.

Kalli Bishop led the Aces in scoring with 14 points and her teammate, Jesstynie Scott, scored five. Madison Shelton almost reached double figures, as she had nine points for the Aces.
Tiffani Goodman led the Mystics with 19 points and Jamison Holloman had eight.

Up next on Championship Sunday was the Boys 14U Championship Game between the Bucks and the Celtics. Throughout the first half, the game was a tightly contested, back-and-forth affair, but the Bucks led 27-23 at the half. 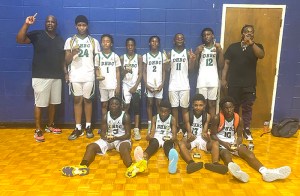 However, the Celtics turned it on in the second half and jumped out to a 46-36 lead.
That second half explosion was enough to earn them the championship in the Boys 14U Division as they went on to beat the Bucks 58-47. 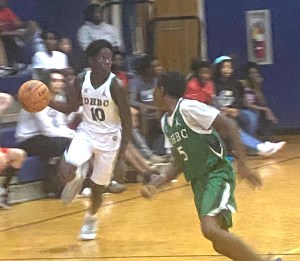 Travin Jordan of the 14U Celtics (#10) pushes the ball up the court against the Bucks in the 14U Championship Game of the DHBC Basketball League.
Photo by Ken Gustafson

Jayden Terry led the Celtics with 21 points and Lebron Brown led all scorers with 28 points for the Bucks.

Game Six featured the Celtics and the Mavericks in the Boys 17U Division and it featured several players from area high schools. As expected in a championship game that featured a lot of talent, both teams competed in a hard-fought first half, but the Celtics went on a late run that was capped off by a three-pointer at the buzzer by Deston Engel to give his team a 35-22 lead at halftime. 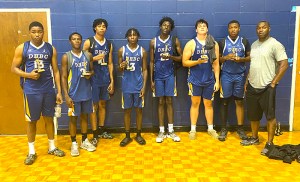 However, the Mavericks weren’t going away. They went on a 6-0 run to start the second half that was capped off by a three-pointer from Luke Exley. That run continued to inspire the Mavericks, as they were able to pull to within two at 39-37. The boys in blue were back in it and it was going to be nail biter the rest of the way.

Then with a little less than 10 minutes left in the game, the Mavericks took a 43-41 lead on a three-pointer by James White. 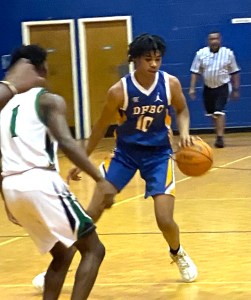 James White of the 17U Mavericks (#10) scored 12 points in his team’s 58-49 victory over the Celtics to win the 17U Boys Championship of the DHBC Basketball League.
Photo by Ken Gustafson

That seemed to spark the Mavericks the rest of the way as they went on a 15-8 run to close out the game and claim the championship with a 58-49 victory.

LaTravis Angry led the Mavericks with 14 points and Deston Engel scored 11 for the Celtics.