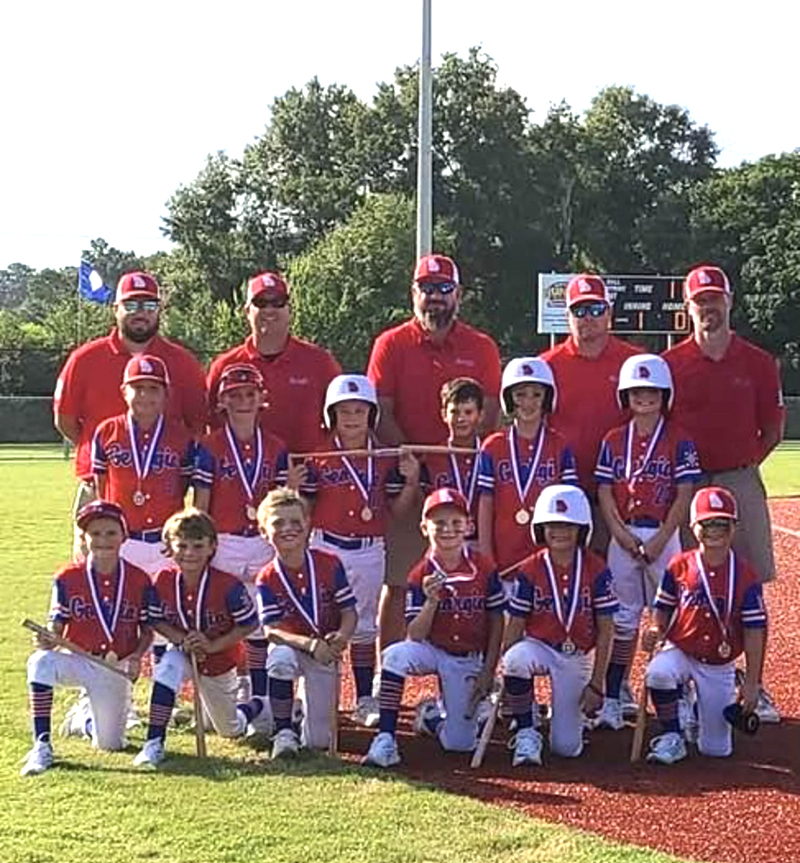 DOTHAN, AL – Having won the Georgia State Championship, the Schley County 8U Dixie Youth All-Stars (SC) earned the opportunity to represent Georgia in the 2022 Dixie Youth 8U World Series this past weekend at James O. Oates Park in Dothan, AL.

The team had high hopes of winning the World Series, but went 1-3 in pool play. Nevertheless, they competed hard and represented the State of Georgia with pride as the first ever Schley County team to advance to the World Series

“I am super proud of this team. They played hard throughout the entire summer.  I hate that our season ended the way that it did,” Schley County Head Coach Gabe Jacobs said. “However, we are honored to have been given the opportunity for the experience and memories it gave. At the first practice, I challenged the team to play FAST (Focus, Attitude, Smart, and Tough). They did! Losing three games by one run is really hard, but we fought to the end and had a chance in every game. I am thankful for this group of boys, coaches and parents. We are extremely proud to be the first team from Schley to make it to the World Series! Hopefully, we will return with some experience under our belts and have a different outcome!” 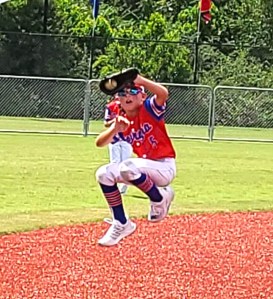 In their first game against the Texas All-Stars on Friday, July 29, Schley County got off to a good start with a 4-3 victory. Braxton Gordon and Jake Lightner both went 3 for 3 and Cavan Jacobs pitched all six innings, allowing just three runs on nine hits.

However, things turned in a different direction when they faced the Alabama All-Stars in Game Two. SC watched the game slip away early and couldn’t recover in a 5-4 loss to Alabama. Alabama got things started early by scoring two runs in the first inning and two more runs in the second inning.

SC was able to get on the board in the second inning when Charlie Calhoun singled and was driven in by Cavan Jacobs when he singled later in the inning. 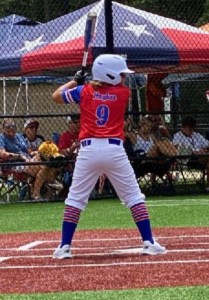 Kamden Hughes is at the plate for the Schley County 8U Dixie Youth All-Stars.
Photo by Devin Hughes

SC was able to tally a second run in the fourth inning when Braxton Gordon doubled to lead off the inning and in the next at bat, Jake Lightner singled, scoring Gordon.
After allowing another run in the fifth, Schley County entered the last inning down by three runs with the score being 5-2. SC started the inning off hot with a trio of singles from Eli Elliott, Kamden Hughes, and Tyler Hobbs. With the bases loaded, Braxton Gordon slashed the lead to one when he singled, scoring Elliott and Hughes. With two men on base, SC couldn’t complete the comeback with the next batter flying out and the last batter hitting into a fielder’s choice. 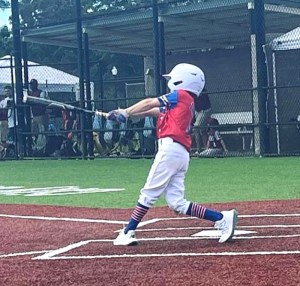 Jake Lightner went 3 for 3 at the plate with a run scored in the Schley County All-Stars’ 4-3 win over Texas in their first game of the World Series.
Photo by Brittany Lightner

In their third game of the tournament against the Virginia All-Stars (VA) on Saturday, the boys from Schley County had a lead late in the game, but fell to Virginia by the score of 8-7.

The game was tied at 7-7 in the top of the sixth with VA batting, but VA was able to score what would eventually be the winning run.

Schley County collected 16 hits and VA had 12 in the high-scoring affair. Schley County opened up the scoring in the first inning when Braxton Gordon hit a solo home run. SC would then score two runs in the second and two more in the third to take a 5-0 lead.

The Virginia All-Stars came back with four runs in the top of the fourth to close the SC lead to 5-4, but SC answered with two more runs in the bottom of the fourth on RBI singles from Conner Manucy and Eli Elliot.

However, VA responded with two runs in the fifth and two in the sixth to take an 8-7 lead. SC was able to put runners on first and second with two outs in the bottom of the sixth when Rome Gable and Jase Rogers both singled, but Kamden Hughes lined out to the shortstop to end the game.

Gable and Rogers each went 3 for 3 at the plate and both Eli Elliot and Conner Manucy went 2 for 2 with two RBIs. Braxton Gordon also homered in this game, as he went 1 for 3 with an RBI.

Cavan Jacobs toed the rubber for Schley County. The lefthander surrendered eight runs on 12 hits over six innings with no walks.

In their final game of the tournament, the Schley County All-Stars faced Texas (TX) in a rematch on Saturday, July 30. Unfortunately for SC, it would not be the same result the second time around as the Texas All-Stars defeated SC 4-3 in a hard-fought, low scoring affair. 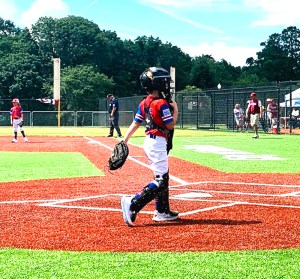 SC trailed by four going into the top of the sixth in their final at bat, but scored three runs on hits by Jase Rogers, Tyler Hobbs and Gage McCorkle. However, SC came up short in this contest as Rome Gable flew out to centerfield to end the game and Schley County’s stay in the World Series.

Schley County couldn’t keep up with TX early in the game. TX took the lead in the first inning and scored two more runs in the third to take a 3-0 lead. TX would then add another run in the bottom of the fourth before Schley County made its comeback in the top of the sixth that fell just one run short.

Jade Rogers led the SC offense by going 2 for 2 with a run scored and Gage McCorkle went 2 for 3 with an RBI. Tyler Hobbs was also in the hit column as he went 1 for 2 with an RBI.

Cavan Jacobs took to the mound once again for SC. In five innings of work, Jacobs gave up four runs on 10 hits and struck out one.